Can it be July already!!? 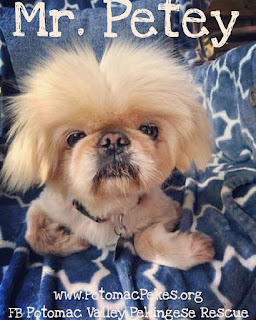 Mr. Petey's story is known by most of you-- he came into rescue in April, a sad, damaged little man. 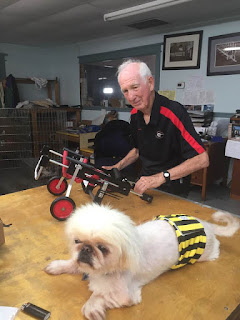 He was given care and love and he responded.   With his deformed front legs, we hoped that a cart could help him. 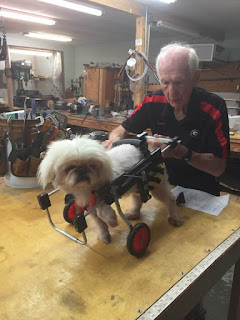 He went to see Dr. Parks.   He was measured the first time, and then had a fitting.  At the second visit, he was in pain as they tried to get his bent and broken areas into a cart.  The straightening of his legs and spine, which we thought would help, seemed to do the opposite.   We didn't want him to be in more pain. 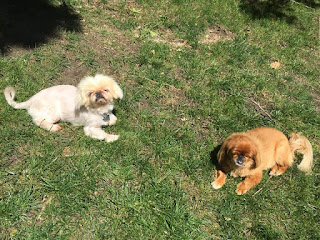 His spine is twisted, due to long term trying to accommodate walking on his left elbow, bending down on that side.  Over time, he couldn't really straighten out his spine. 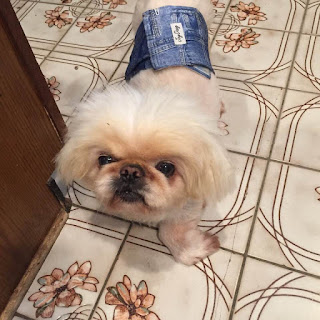 We wanted to make him "whole"-- but Dr. Parks called to discuss his case. 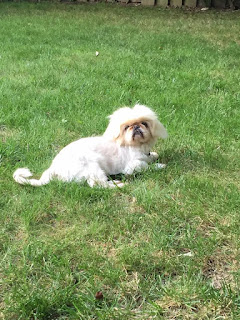 He has made carts for over 60 years-- and he said, in his opinion, Mr. Petey would not adjust to the cart without a lot of pain.  Dr. Parks was willing to continue to work on his cart-- he had already ordered special parts and extra slings.   But, the more he thought about it, the more he felt it would not be in Mr. Petey's best interest to continue.  Dr. Parks has so much experience-- as a vet and cart-maker.   We listened. 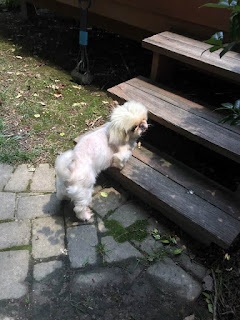 Mr. Petey can get up short steps.   He gets around.  He can even run some.  He seems happy. 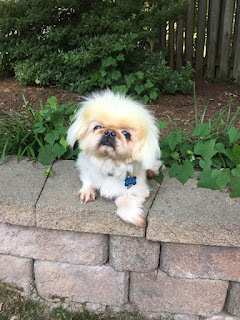 He is a beautiful little boy-- I love this picture! 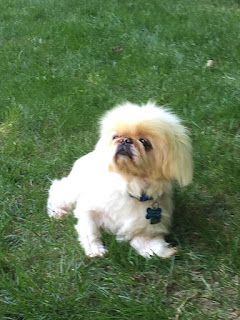 Dr. Parks said we did not have to pay him anything-- but he did so much.  So many of you donated for this.  So, to say thank you for all of you and to say thank you to Dr. Parks, we are paying for Petey's cart and asking that it be used for another rescue dog who can use it. 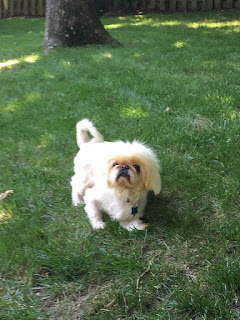 I think Mr. Petey will be fine, we will give him the best life he can have.  Georgia, his foster mom, is doing a great job with him.  Mr. Petey can be adopted, but should not be around children.   He can be a little unpredictable at times.   He is a special one-- but he is safe now and loved.  What a life he has-- off the streets and in a home.  💙  I love what his foster mom said about him-- he is not disabled, he's just differently abled.  Perfect!
Posted by Linda at 12:30 AM

What a wonderful man Dr Parks is!!! He is a Peke Doctor Angel !!!

Mr Petey - Yum Yum and I are doing a extra special Adoption Dance for you .

*I am so sorry the cart was a "no go" for Mr Petey but if he is like my Yum Yum - they love to be carried around!!! LOL

Such a sweetheart...keep him close