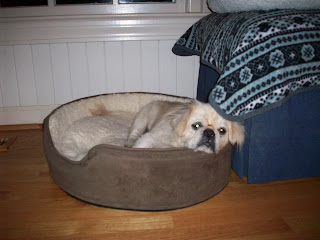 Look at this boy-- and read his story. And then come back and look at him again. We love you, Andy!!! 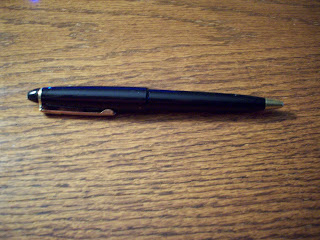 You're wondering why I have a picture of a pen on my blog. I'll tell you. I was in church last week, and using this pen to take notes. 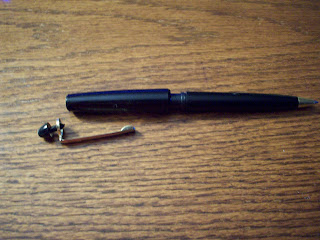 And it suddenly fell apart on my lap. Nice. I just looked at it and was going to just throw it away. 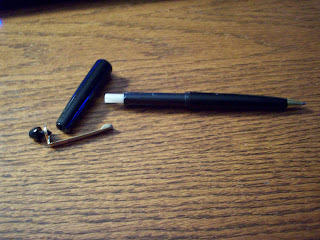 It didn't seem worth fixing. And I thought, "that's what people think of a lot of shelter dogs." They see them, with broken spirits and broken bodies and bad skin and think they can just "throw it away." That's where rescue comes in. (My husband picked up the pieces of the pen and put it back together, even though I had tried.) 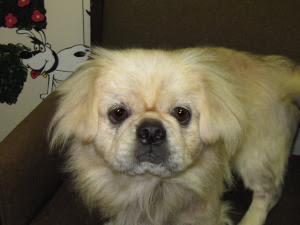 I received an email from an animal control near me. They had a Peke who had been there for three weeks and they didn't think anyone would adopt him. He had a terrible skin problem and people looked at him and just walked away. He may have looked like that broken pen, but inside, he was a dog who wanted to be saved and loved. And fixed. 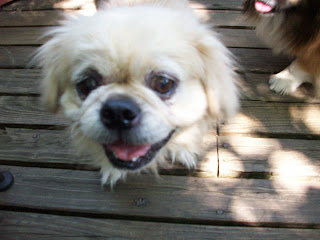 So, I went over and they brought him out to me. He wagged that tail like crazy! I checked him over, giving him every opportunity to snap at me-- he didn't. I put my hands on his face, in his ears, in his mouth-- no reaction except to wiggle more and wag that tail. He was a big boy-- 20 pounds. Pure happiness. 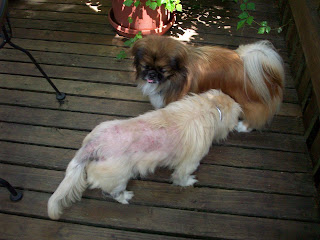 But, his skin was so inflamed and raw, and he was so itchy. No way was this dog going to be adopted-- we were his only chance. He looked like a "junk yard dog." I've gotten those before-- and they have become BEAUTIFUL dogs. Like Lacy. Like Bear-Bear. But, they have to have someone who will give them a chance. That's where rescue comes in. 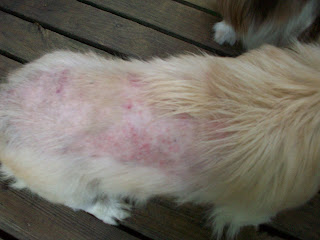 If my skin looked like this, I'd be miserable-- and he was. But, he was still so happy. So, I got him, took him straight to the vet and had him checked out. He had a shot for itching-- I said, "please help him now." We got pills for itching, we got antibiotics, we got special shampoo for baths every three days (thank goodness I have a Peke-sized sink with a spray nozzle), he got ear and eye meds, he got bloodwork, and a nail trim. He was checked all over-- and he just wagged his tail. 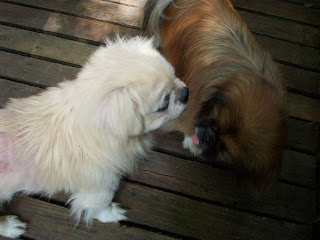 He is extremely playful! My Scooterbug, my therapy dog for newcomers, and Andy really hit it off! They have been playing since he arrived. 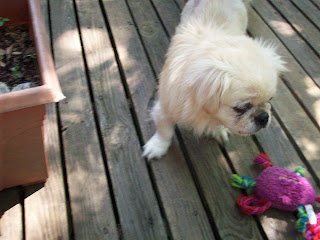 Andy likes toys-- he really likes the tennis balls I have. But, he'd rather have me-- to follow around, to watch. I think he's saying THANK YOU. His body was so itchy and oily and smelly-- but there is beauty beneath that. He is worth fixing. 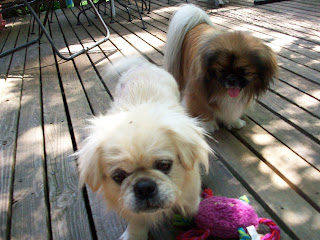 I took a video of him playing so you can see his personality.
Click here: YouTube - andy He is so happy! Maybe I should just call him Happy! Do you think he is worth saving? I'm sure you do, too! If you want to help with his care, you can go to http://www.potomacpekes.org/ to make a donation. Or just reply on this blog to tell him he's worth it! And that he is loved and that we will find him a home. He's only about 3 years old-- so young. He has a lot of years for health and happiness. I know there will be more like him, but for now, he's the one that we are helping. (And all the rest in rescue.) And he's worth it!
Posted by Linda at 5:00 AM

Wow Linda....great blog. I know Andy thinks he has died and gone to heaven being at your home with all his new friends. And yes this is why we do rescue. If only everyone could look below the surface. Too many overlook those who can be fixed with just a little love and medical help.I know Andy will find his "FUR-EVER" home. Give him a big hug for me please.

What a guy!
Ooo, that skin looked so pink and sore .
I think whoever adopts Happy Andy will have a special friend for life!
You did good Linda!

Thank you Melinda!! He is such a happy boy!! More videos tomorrow!
Linda

Thank, Jeanne! You and I are in this together-- I'm so glad you're my team-partner!!
Linda

I read your blog everyday and you inspire me to do more for the animals in my life.My little Peke, Princess Mugwhump,loves to watch the videos you post of your rescues.She and I both think Andy is your newest diamond in the rough.When you finish working your magic he will be one handsome little man!

Thank you for all you do for these loving dogs.My peke,Princess Mugwhump, and I love to watch your videos and you all inspire me to do more for the furry ones in my life.Andy is your newest diamond in the rough and when you are done working your magic he will be one handsome man!

I am sending hugs and kisses to Andy -- please pass these on.
He has received the best start for a new life by making friends in your home.
I loved seeing his wagging tail and happy face in the video.
Every day in rescue must bring you new joys. I really enjoy your blogs.

I love the name "Princess Mugwhump!" What a great name! I'm glad you are all enjoying the blogs. I sure have fun writing most of them. Some are serious, but most are just fun.

Andy is now at Jeanne's house, checking out the Koi pond, running all over the yard, trying to make friends with Jill-- he'll have to give him time though. Then, I'm sure she'll be his friend!
Linda