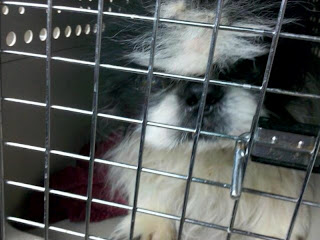 This is Elvis-- he was turned into a shelter with five others. The rest went to another rescue group, but we were told Elvis was a Pekingese, so we got him. 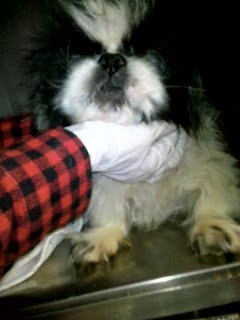 I think he has something else in there-- Chin or ShihTzu. But, once we agree to get a dog, we do that. We are good to our word. He was picked up by a volunteer who took him immediately to the vet. He was in horrible shape. 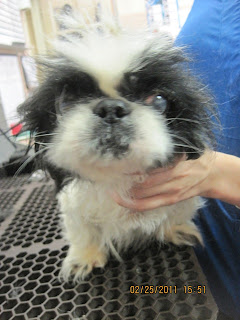 His nails were growing into his pads, he was covered with mats and filth. His eyes were extremely dry, and needed drops, but he can see some. He has an ear infection (now on meds), and infected skin. He also has a tumor on his abdomen. But, in the midst of all we were doing for him, his little tail was wagging. He was so grateful and knew he was being helped. That's what amazes me about these little ones-- they are just so thankful to be helped. 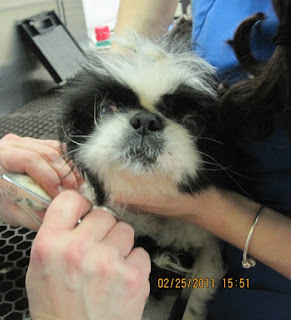 Elvis is safe now-- we'll have an ultrasound done on Monday to see if he can have surgery. If he can, we'll do it. If not, we'll just take care of him until he's not comfortable. If you are interested in being a "hospice" home for him (if needed), just email potomacpekes@gmail.com.
Posted by Linda at 5:00 AM

Oh Linda - if I only lived near you !!! I would take that boy in a heart break hotel heartbeat!

Poor Elvis. Definitely keeping him in my prayers.

The poor neglected condition of Elvis just breaks my heart! At least he and the others were surrendered in time to get the help they so desperately need.

I have been thinking of him since I saw the FB post yesterday. He knows that he is safe no matter what, and will be cared for . His tail wagging shows that. The amount of love a dog has to give amazes me, especially in stories like this.

Awww! Poor little guy! Glad you could be there to help him. Hope all goes well at his appointment.