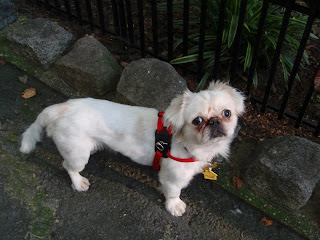 This is Taylor after his nasal (eye) fold surgery.    He had pretty large folds! 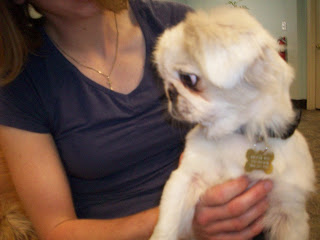 Just look how flat his little face is.   He's so cute!   He will be three in November, so he's a young one. 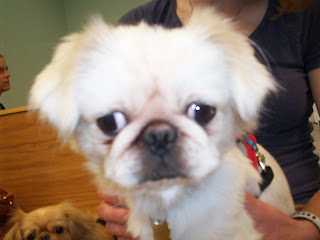 Look at those folds!  Whoa!    Taylor was an owner turn in because he had fleas-- really?  Fleas?   (When he left, the fleas were still there!) 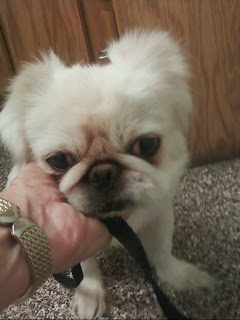 Don't let this sad face fool you-- Taylor is a very happy dog who enjoys playing with other dogs.    He was under 11 pounds when he came into rescue, but he's gaining some needed weight.  He won't be big, but 12-13 pound would be a good weight for him. 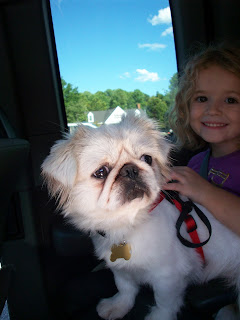 He got to ride on Bitty Bit's lap on the way to Richmond.  She was so excited! This was after his eye/nasal fold surgery, but he's all healed now.  When I get new pictures, I'll be sure to post them. 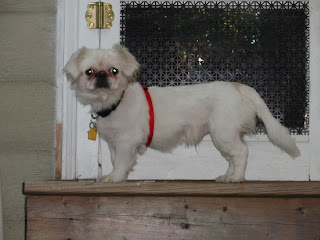 He was given a short cut, but it's growing out for the winter.     This sweet boy is waiting for his forever home!   Check out some new pictures of him tomorrow!
Posted by Linda at 1:00 AM

Fleas my foot!
Anyway he is a lovely Peke and white ones like that are rare!

Miss Bit is getting bigger and prettier everytime I see her!!!

I just love his flat face!!! One of the babies was that way too. I could give him smooches all over!