Gracie D. was a beautiful girl-- 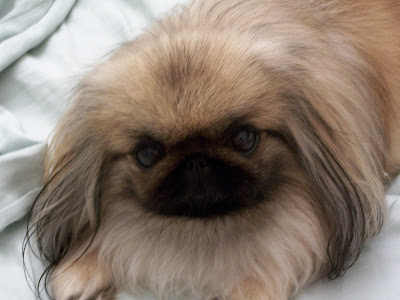 Gracie has a trachea problem and had a tracheostomy to help her to breathe. 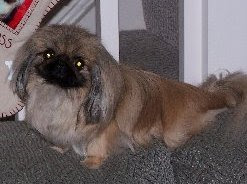 In spite on all her parents did for her, she lost the battle a few weeks ago. She passed away in her sleep. 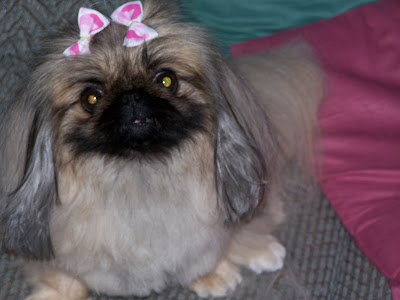 I know every Peke is beautiful, but Gracie has such a special look about her. She was a joy to her family, has a perfect temperament, and had a lion-heart. She was a small one, just a little bigger than what we call a sleeve Peke. 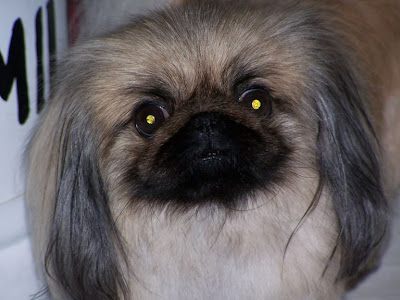 Gracie was her mom's heart-dog. I think we've all had these special ones who for some reason, get closer into our hearts and lives than the rest. We love them all, but some are just special. 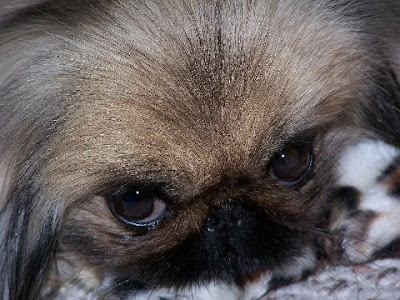 Here's what her mom wrote me about her: Grace ("Ro-Lyn Ruby Tuesday," but Gracie Mae when she was naughty!) was born 29 January 2002 in SC. Gracie's name came from my priest's saying "all is grace" -- everything is an opportunity to see the face of God, and nothing is bad in itself. What a grace she has been to me! She came to me over the Fourth of July weekend in 2002, at 5 months. She immediately owned the house. After her first bath, she pulled all of her toys, and MY blowdryer, into a pile in the living room. She always had plenty of little toys; she liked the soft stuffed animals best. She'd shake them but never tore them apart. She was the Mayor of our neighborhood. If someone forgot to say hi, she'd chase after them a bit, as if to say, "HEY, I'm really cute, and I'm down here, did you not SEE ME?" She was great with people of all ages, but she didn't like other dogs until she knew them well. I have a lot of nieces and nephews, and she never snapped or bit. She just patiently sat and soaked up the love! She got to travel a lot. She flew to California and Missouri, irritated to be in a carrier under the seat rather than my lap. We drove to NYC several times. She went to Cooperstown, Baltimore, Harrisonburg, Asheville, the Outer Banks... wherever we went. When my husband I were dating, she went to DC twice a month. My husband teasingly asked me when we were dating if he could visit Gracie if we broke up. I said no, and he proposed shortly thereafter. Coincidence? ;-)

Gracie BEGGED like crazy, but I tried to be very careful about her diet. We'd give her bites of banana and blueberries (her favorite), and occasion little tastes of peanut butter or yogurt. We used to tease that she was looking for the weakest link at the dinner table, praying that someone would "please just drop something...." Grace was 5.8 pounds when she came here, and was about 6.8 pounds shortly before she passed. She had been 7.2 pounds the day before she passed, and her vet said he was putting her on a diet. I teased him after she passed that her passing was his fault, because she heard the word diet and thought NO WAY. Her vet was Dr. Sean Back at Beach Pet Hospital. He was wonderful with her, and he took great care of her. I could not have gotten her healthy after her tracheostomy without the help of him and his staff. I brought her in at every little sniffle, and they were always patient with me, even when I felt like I might have "Munchausen's by Doggie." Her vet tech, Melissa Roberts, was such a blessing. On the few weekends that I had to go out of town, Melissa backed up my mom, to make sure Gracie's trach was ok. The night before Gracie passed, I called Melissa panicked for some advice because Gracie was struggling to breathe. Her "advice" was "do you mind if I come over?" She has such a love for dogs and was so caring with Gracie. Her kindness will never be forgotten.

My mom lives next door, and she helped with Gracie tremendously. Gracie loved her Nana! I think the loss of Gracie is hitting Momma just as hard as me. When I'd take Gracie out to potty, she'd try to go to Nana's house instead. Momma took care of her when I worked, and with her trach Gracie needed the extra attention.

Gracie started to get "breathy" on walks. She had her first major episode in late June of 2008. We could not get her to stop panting, even in air-conditioning, so we took her to the Emergency Vet. They kept her overnight. That was the first night she'd ever been away from her family, and it was really hard on me. She saw a "specialist" (not at Beach Pet) who misdiagnosed her with tracheal collapse. She had a second episode in October of 2008, and her vet sent her to see Dr. Marti as a surgical referral. Dr. Marti was great! By merely listening to her, he knew she did not have tracheal collapse! He sent us to his alma mater, North Carolina State Vet School. Gracie had Dr. Kieri Jermyn there as a surgeon, and she correctly diagnosed Grace with laryngeal collapse. They tried laryngeal tie-back, palate shortening, and nostril opening, but it was not enough. We agreed to a tracheostomy as a last-chance measure. Gracie recovered well, and she was able to enjoy most of the 46 weeks she had post-surgery. I cannot speak highly enough of the NCSU Vet hospital!

The last week before she passed, Gracie seemed tired. She couldn't get comfortable to sleep or rest. Since her surgery, she has not been able to sleep in bed. The floor was more comfortable for her breathing. When her nose was dry that week, I knew that was not a good sign. She saw her vet on Tuesday, and she needed oxygen in his office. She had an episode that night, and her vet was going to watch her on Wednesday. I made brownies to thank them for everything they had done. Gracie was watching, begging a bit. ("No, Gracie, Gracie-girls can't have brownies.") We went to bed late, and I set the alarms to check on her. At 1:30 she was fine. At 3:30, I checked on her, cleaned her trach, and petted her for a bit. She wagged her tail. When I got up at 5:30, she was still. I went over to her, but she was gone. She left our world on 16 September 2009. I hugged her and kissed her, and then I called my mom and her daddy up in DC. My husband and I had planned a belated honeymoon trip (by RV to accommodate Gracie), which was scheduled to start on the 19th. We were sad not to have our little pup along. The house seems quiet, and I still check my footing not to step on her. For the first 2 weeks, I still woke up to check on her and to let her out in the morning. I'm trying to stay focused on her life, and all the wonderful love she brought into my family, rather than her loss.

All is grace. Rest in Peace, Sweet Gracie
Posted by Linda at 6:00 AM

I'm so sad for them. Losing one's "heart" is never easy--I can so relate! Hopefully, they can rescue one that so desperately needs the love they can give. My sympathy goes out to them.

I'm not sure I can see to type this. The tears are rolling down my face. What a wonderful story of Gracie's life. I feel your pain. I'm so sorry for your loss. You were a great Mom....

Thanks so much for posting this about our little one. She was such a dear girl.

We're considering fostering, we just need a bit of transition time. Keep me in the loop.

My heart goes out to Gracie's mommy. Lu is certainly my "heart dog". I can only imagine how Gracie's mommy feels to have lost such a darling fur daughter :(
*hugs*

So sad, and only 7 years old. That is such a difficult thing to go through. I don't think one ever gets over it.
I've had several scares with my heart dog lately ~ he is 11 and I need to focus on the time we have left. He also has breathing episodes.
Gracie sure was beautiful and special.
My heartfelt sympathy to Gracie's family.

To Mary Elizabeth. I lost both my dogs a week apart this january and I miss them so but.... when the time is right I would get another dog.
After my second , Oscar , died I waited a week.We got bad boy puppy Kenzo a malt x shih tzu. This was right for Me - I knew if I did not get a dog straight away I would be scared it would happen again and I would never get a dog .Both died for different health reasons. Then a few months later we got Moi Moi a peke that a breeder did not want anymore. Moi loves it here even if Kenzo is bossy. It sure beats a breeders cage and she is so sweet.
Mary Elizabeth, I send all my love and you will know when you need to get another doggie . It won't be Gracie but believe me, they get into your heart like seagulls on a dropped bag of fries!!!!!!

Denise, a fan of the Mighty Miss G said...

I had always said that I was not a "little-dog person," until Gracie showed me the light. Thank you, ma'am. I am the better for having known you.

To Gracie's family I'm sorry for your loss, what a wonderful story of her life and love. after reading this I realize that my DOLLY was my heart dog. I had her since she was a pup that fit into my hand. She passed away May 19th and was almost 13 yrs old - I still miss her so much. We just got a minpin/Chi mix and she is a ball of energy - she is sweet but more of my kids dog.

I hope time makes it a little easier and may you find a sweet peke to be by your side when the right time comes or the right peke!

Grace is such a beautiful Peke. I'm so happy to hear she gave you the gift of a tail wag that final night. She was thanking you for your love and waving goodbye - but only for the time being. Thank you for sharing your story. She is your angel.

Mary Elizabeth, our hearts go out to you. We lost our beloved boy, ChiChi, such a loving Peke that was gorgeous to boot. He was 10 and suddenly threw a clot. The doctor said it was a matter of time before he would throw another. He did and we lost him 4 months later. My heart broke when I read your story. ChiChi was our "heart", which is a such a great way to describe that very special love. I thought I could never go through that again and didn't believe I would ever be ready for another Peke. However, a wonderful rescue came our way via Linda and we adopted him on Sept 5, which happened to be ChiChi's birthday. I think ChiChi decided that we needed Joshie and we did! Then a few months later, when it seemd that Joshie needed a brother, we adopted another rescue, Jimmy aka, Cocoa. The two are quite a pair. The point of the story is that no one will ever takes Gracie's place in your heart, but Gracie just might someday send your way, some little Peke that needs the special love that you and your husband gave her. She was absolutely a gorgeous little girl....a wonderful gift to you as I am sure you and your husband were to her, too. Take your time and just keep loving her. I have a feeling that she'll take care of the rest:-)