My husband calls this group "The Ottoman Empire." That day, we had a crate next to the ottoman, and Anna crawled into it-- Scooter was on the crate and Max and BB were on the ottoman. Talk about double decking! 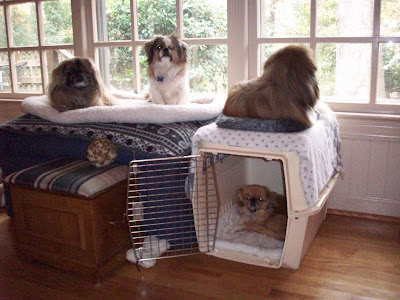 BB has gone to another foster home since I've been on call for a new grandbaby -- who as you know, came early! (I had too many Pekes here-- BB, Anna, Missy, Nutmeg, and mine-- a lot of Pekes!) BB loves her new foster home, so don't worry about her. (I did, of course, but now I know she is just fine. And she has someone who wants to adopt her!) 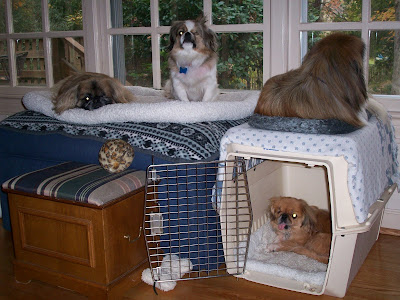 The ottoman in front of the window is THE favorite spot to be. They love to look out the window-- and it was getting dark, so the Santa watch was on in my house. Pekes know good things happen at Christmas time. Some even get new forever homes! 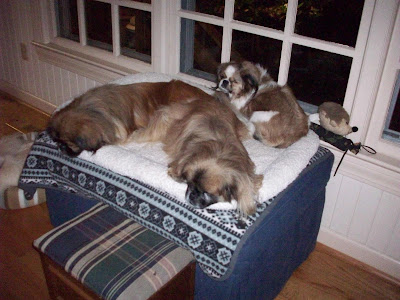 Cranberry never used to get on the ottoman-- but now she does. Only because she doesn't want anyone else to have it. And if she's there and they try to get out, the yelling that starts is amazing. EVERYONE respects Cranberry here. If she's there, it's hers! Notice she is there by herself! 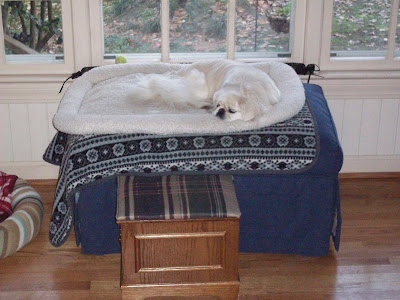 She's up there to take a nap now-- I have the stool in front of it, because the Peke legs are just too short to get up there on their own. They try, but it's not worth straining those Peke backs. 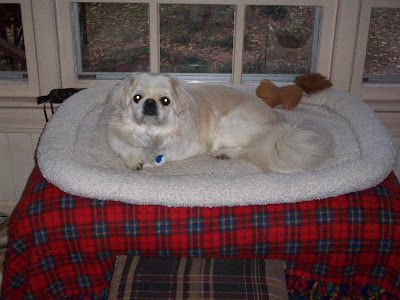 Yes, Cranberry, you are beautiful, you are the queen. And everyone here knows it!
Linda haveninhim@aol.com http://www.potomacpekes.org/ (Check out our web site-- we have had "visitors" on it from: Belgium, Ireland, South Africa, Russia, Malaysia, Sweden, Canada, England, Finland, Germany, Egypt, Austria and of course the United States-- :-) Thanks Jeanne and Larry for a GREAT web site!)
Posted by Linda at 6:00 AM

OMG , that first photo is a Peke Highrise! LOL

I wish I could have a lend of Madame Cranberry, she would put Kenzo in his spot!