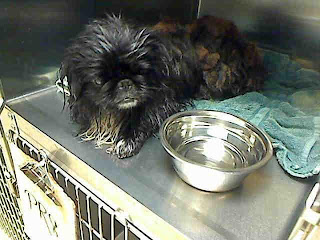 Look at this little boy. This is his shelter picture. He was found in a rural area and they had to trap him to catch him. I know he is fearful of people approaching him and standing over him, but if I kneel down, he comes right to me now. There's something about people towering over him that frightens him. We can only guess at what that might be. 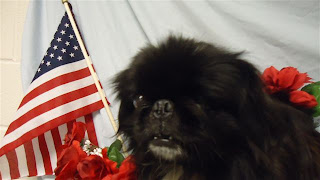 The shelter gave him a flea bath and tried to get some knots off him. They do their best, but there are so many dogs. They took this cute picture. Thank you for all you do there! 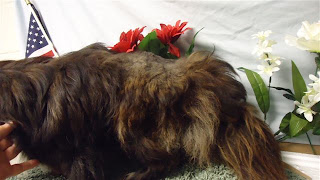 You can see some of the mats that were left. They asked for help. One of our helpers picked him up-- and she is a groomer, so she took him and gave him a capstar, which kills fleas within 30 minutes. The fleas were dripping off him. She groomed him, shaving him down and helping his skin to feel better. THANK YOU, COLLEEN!! 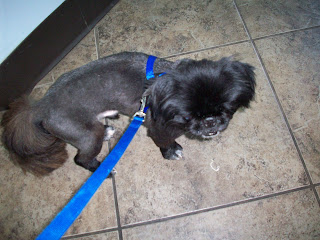 Tiffany helped transport the second half of the trip and she brought him to me. He was sick with a drippy nose. :-( We already had a vet appointment for the next morning. I texted my vet to let him know I was coming (I love my vet!). 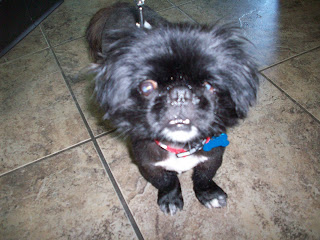 Jasper needed his vaccines, and all the other vet checks we do. His bloodwork showed he was heartworm postive. I haven't had a heartworm positive dog for
awhile, so I was surprised, but I shouldn't be. Jasper was on his own for awhile and neglected, and he's probably never had a heartworm pill. Jasper has to have one eye removed (it was previously injured and is in bad shape) and the other eye needs the fold reduced (that eye has some scarring on it, but he can see). He also is a mouth-breather, so he needs his nose opened up so he can get more oxygen. And yes, he needs to be neutered. Poor guy is going to really get it all. 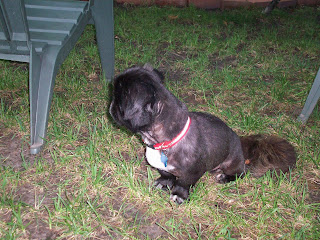 I took him out in the yard. Who is over there, Jasper? 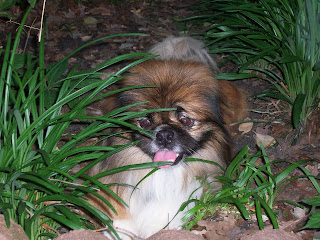 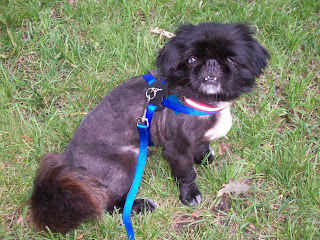 Jasper is only 12 pounds and not a bit aggressive. He wants to be around the other dogs and wags his tail like crazy. 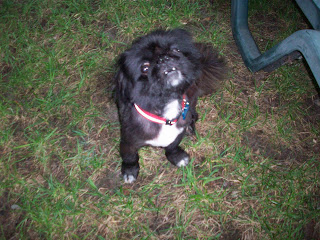 His teeth are in pretty good shape and he doesn't even need a full dental, but my vet will polish them up when he has his surgery. We think he's about 4-5 years old. 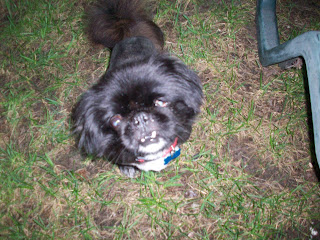 Jasper will take several months to get healthy, but once he is ready for adoption, I know he won't last long! 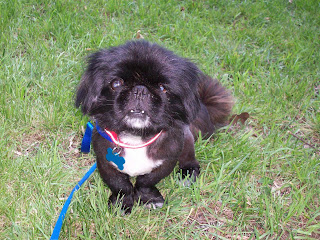 I'm so glad you came into rescue, Jasper. You deserve to be helped and loved. If you want to help with Jasper's medical cost, just email us at potomacpekes.org or go to our web site: www.potomacpekes.org
Posted by Linda at 5:00 AM

Poor old jasper - I shudder to think of what he has been through over the years but.... he is in your home Linda and he is safe.

He looks a handsome man now!

soo cute! he definitely reminds me of Coach--I think Jasper wants to curl up on someone's bed like Coach used to do on mine. :)

I am so glad you have him:) It's amazing how much better he looks already with the grooming..plus, you can just see it in his face how much happier he is!! no more fleas and mats!!

Jasper is such a sweetie pie! He has such happiness in his eyes, not like the picture from the pound. God bless you for caring for him and the others like him. I'm so happy I found you!

Thanks for the update on Jasper! What a handsome little guy! Thanks to everyone that helped get Jasper rescued and on the road to a happy life!