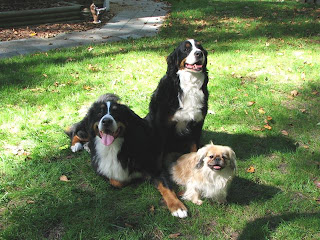 Glitter joined her family this week. But, before she got there, this was her family. Joey and Jilli were Great Bernese Mountain Dogs. They are incredibly beautiful dogs. Joey was Jilli's brother, and he lived in Richmond. When he came to visit, they took a family picture. And then there's Teddy, the Peke. :-) Jilli hated having her picture taken, but Teddy was ready to be front and center! Both Joey and Jilli have crossed the Rainbow Bridge and Teddy needed a friend. 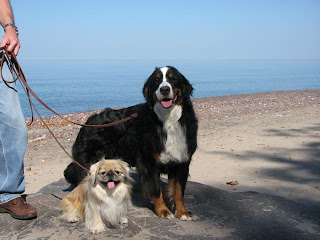 Teddy and Jilli went to Lake Superior. I would like to go there-- 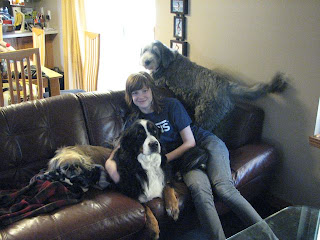 Teddy is lounging on the couch with Jilli and "cousin" Trevor, a Bearded Collie. Teddy needed a new friend after Jilli died, and now Glitter is part of the family. 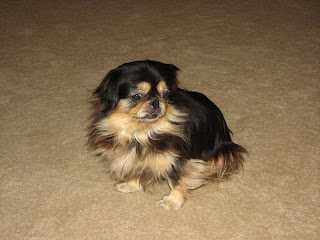 Her parents really thought about it and decided her name should be Grace. But, they know we've had Gracie McGhee and then of course, there is Gracie Lu-- so they are deciding on a middle name for her. What would you pick? THEY JUST LET ME KNOW HER NEW NAME IS GRACIE ROSE. LOVE THAT! 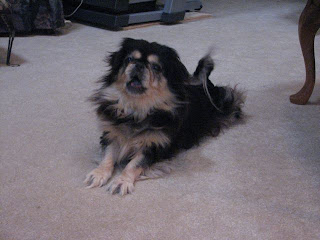 I think she's trying to tell us, but we can't understand what it is! She is fitting right in though and she ran a lap around the yard on Thursday. Her mom said, "I think she's gonna be a mess when she finally comes into her own!" Yep, I think she is feeling right at home.
Posted by Linda at 1:00 AM

Hi Gracie Rose, It's me Gracie Lu and it's fun to know someone else named Gracie like me. Much happiness in you new home with Teddy.

I think she is feeling right at home too!!!!