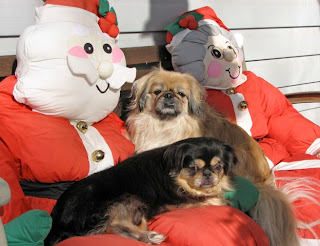 Here's Gracie Rose (formerly Glitter) and Teddy. He's the photo ham and she's camera shy. She'll get used to it. 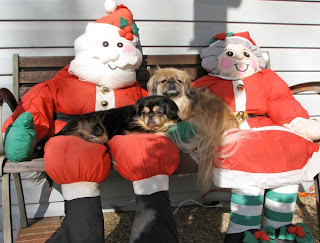 They are posing on the front porch with Mr. and Mrs. Claus. I think Gracie is looking for the real thing. 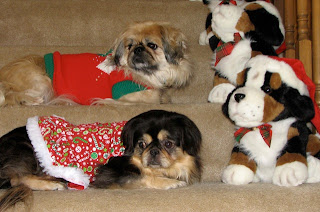 And inside, they are with little stuffed "Berner" (Bernese Mountain Dog) pups. They are so cute! The Pekes and the Berners!! Gracie's mom had many Bernese Mountain Dogs and Gracie has similar coloring, so it was love at first sight. 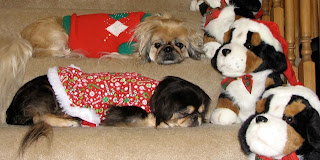 I think she is bored with the photo session though. Teddy seems to be asking if it's done yet, too. 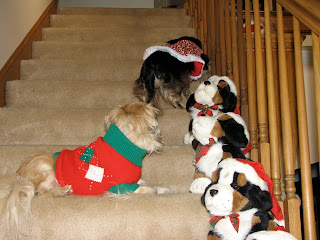 And Gracie gives up and marches up the stairs. "Hey! Where's she going? Are there no more pictures?.....Bye Grace.." Wait, Gracie, we're not done yet! 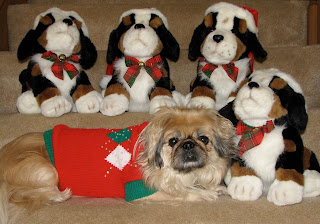 Where did she go Teddy? Don't worry, you still have a lot of company. And you can be the center of attention now. 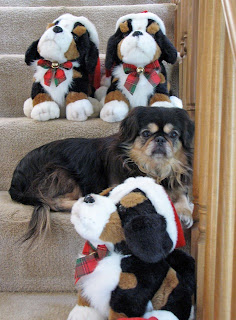 There she is! She's hiding. 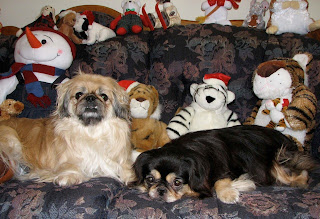 Now, they're on the couch, surrounded by other holiday pets. Gracie is still not thrilled with the photo session. I think Desi, from yesterday's blog, can relate. Divas are like that you know. 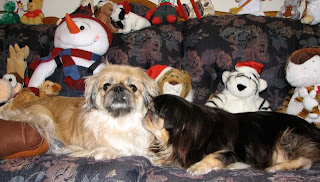 "Please make her stop." Okay, Gracie and Teddy, I think your mom is done with pictures. At least for now. I'm sure there's another picture session in the near future though. :-) 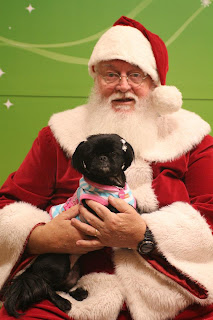 And here is one more picture. We don't know who she is, but she was part of a Santa Picture session that one of our foster moms helped with. I had to include her picture because, after all, she's a Peke and she sure is cute!
Posted by Linda at 1:11 AM

There is ALOT of festive Peke'n going on there!!!!

There is ALot of festive Peke'n going on !!!