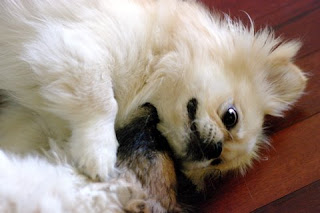 Here's Buster again! He joined his family "temporarily" but they decided he isn't going anywhere! His two Peke brothers are mellow, but Buster is sweet, playful and keeping his new mom on her toes!! His family has adopted two Pekes from us in the past, so they contacted us to turn in this shelter Peke-- he never left their house! 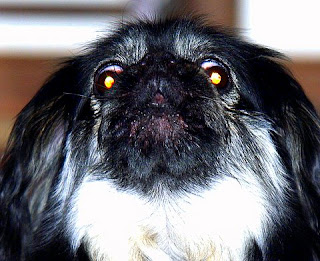 Chauncey is not a bit impressed with this little whippersnapper! Chauncey was also a rescue dog. 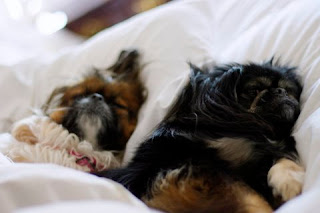 Georgie, on the left, and Chauncey, were used to calmly sleeping in their parents' bed. Are they adorable? Peace and quiet-- not anymore! 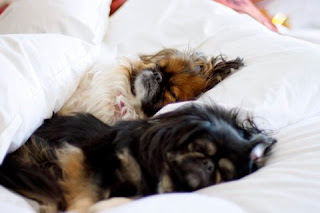 They used to relax in bed-- no cares in the world. Then, Buster arrived. 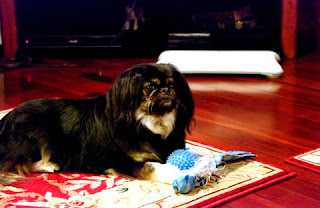 Chauncey is still trying to figure out how he got there-- you know, Chauncey, Buster just came to visit. You let them know you were not voting him in, but I guess you were over-ridden. 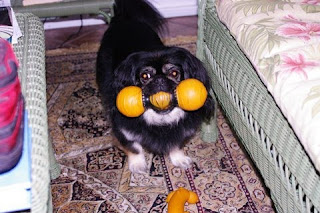 Yes, Chauncey, we see you are a strong dog-- it won't work though. Buster is still staying. 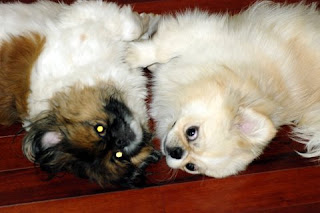 Georgie plays with him-- are you going to start playing with Buster? Come on, Chauncey, it could be fun. 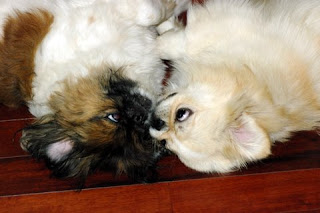 Buster would give you kisses and hugs. Georgie was pestered a LOT before he caved in and decided it was okay for Buster to stay. 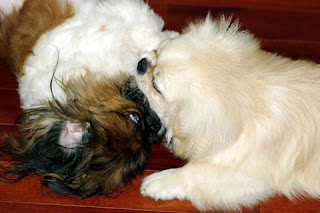 Chauncey, look at how much fun Georgie and Buster are having. Really, you could have fun, too. Instead you howled, got possessive, acted spoiled and regal-- those are your mom's words, not mine. :-) I think you are just being a Peke. :-) 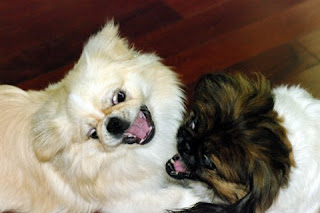 I don't think it bothers Buster that you won't play-- he is totally involved with Georgie. Maybe one day, you'll join them. Until then, just go climb in bed or snuggle with your mom-- she still loves you, too.
Posted by Linda at 5:00 AM

Love that shot with those two in the bed !!!!


Well - Buster needs to meet my Kenzo - they are soul brothers!
Big pests! as Moi Moi would say - I think Chauncey would be on Moi's side :)

Buster is so handsome!! I think he fits in well with Chauncey and Georgie..at least in the looks department:p At least Georgie plays with him..I bet they have lots of fun together!

What beautiful pekes! It looks like they were all meant to be together :)

Those two in the bed must somewhat resemble what Zack and I looked like this morning, although I finally had to convince Zack that we really did have to get up and get going - especially since I didnt have the day off. but Buster and Georgie on the floor look like Zack and Jazzy playing! So happy for their whole family!!!

Update........Sir Chauncey would like to give Buster to a good family for Christmas. The cat has decided he is a dog and my sweet King Georgie is still begging for a moment alone. Good Ole Boy Buster says, "Let's rock the house down yall!"

Happy Holidays to everyone!

UPDATE:......Chauncey is offering free shipping to anyone that would like to have Buster for Christmas! :)