Buster was an owner turn in to a shelter in S.W. Virginia. He tried taking him on his work travels with him, staying a pet friendly motels-- but it didn't work. He arrived at the shelter in a red convertible with his little paws on the dash. I can't imagine how he felt when his daddy drove off. 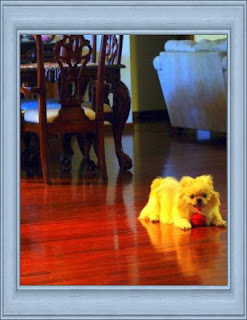 But, one of our rescue friends got him out!! They got him out and were going to turn him into our rescue, but they were falling in love FAST!! I understand this! It's happened to most of us in rescue. 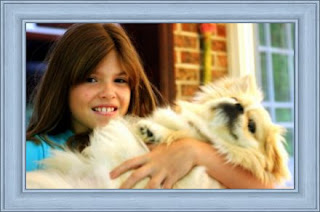 Buster is only a year old and 13 pounds. He is so sweet and playful and is keeping his new owner on her toes as he learns house manners and learns not to mark. (Been there, done that!) The cat in the house is tired of being stalked by Buster haha. He will probably need therapy unless Buster stops stalking him. :-) I've had dogs who LOVE my dogs-- to the point of distraction! But, Buster is a puppy and will be fine. His new owner said the dogs and the cat were all rescues. 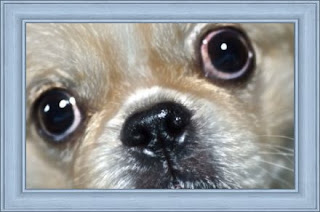 Buster, you are so cute! I'm so glad you found your forever home so fast! (Look tomorrow-- there will be a blog on Buster and his friends!
Posted by Linda at 5:00 AM

Oh my, who could NOT keep Buster!!

Yeah for Buster!!! Glad he got his furever home!!! How blessed he will be. I can't imagine what went through his poor puppy head to be dropped at the shelter. UGH. Makes me so frustrated with people sometimes. But, so good to see the nice side of it with people like Buster's new family!!!

it's a sad beginning of the story for Buster but I'm glad it turned into a happy ending, I wish people would at least look into rescue groups or reach out to family and friends before they take them to a shelter.
Zack, Jazzy and Abbey are happy that Buster has a Furrever family too...........but Abbey (a/k/a fat cat) says to Buster's cat...get used to it! Once there's one dog then there's another and another etc. etc. haha.

Yay for Buster!! That gives a sad frustrating story a super happy ending!!!

Yeah for Buster! What a beautiful ending to this story.....