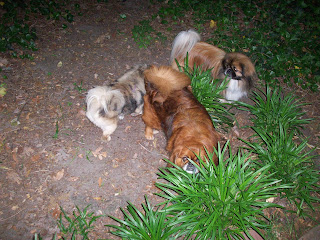 I had to include this picture before the blog posted. Little Daisy is dwarfed by Scooter and Kai. Can you see Kai playing peek-a-boo in the border grass? I'm going to be planting flowers soon in that area, but for now, the dogs are just wandering there. And here's little Daisy: 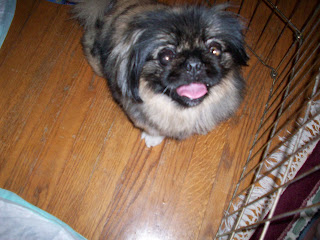 This tiny girl just came into rescue. She's only 9.5 pounds, but she thinks she's a big dog. 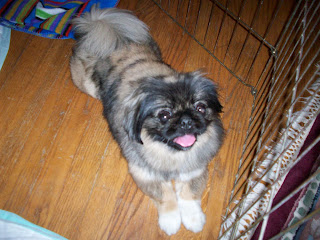 She was a stray, and I named her Daisy-- it just seemed to fit. 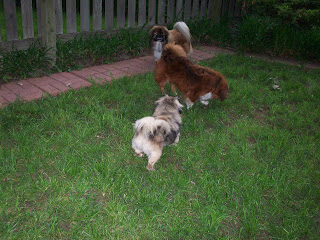 She went out into the yard with the big boys, Scooter and Kai. Scooter is over 18 pounds and Kai is about 20-- he would be two of Daisy. Daisy didn't seem to realize that because she thinks she is the boss. 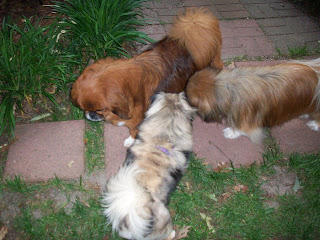 It's a meeting-- she's telling them she intends to take over and be the queen. 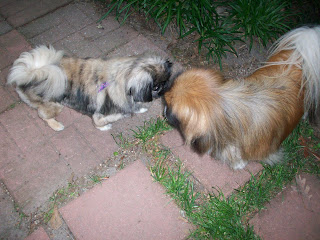 Do you understand that, Scooter? I am boss. ;-) Scooter doesn't care. He's so docile and just wants to be happy. 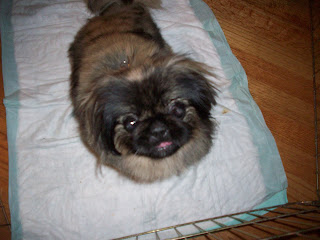 Daisy had her spay and dental and is recovering now. She is in the xpen or the playpen to keep her from moving around too much, but I know that won't last long. She is extremely sweet with people, but if she is with another dog, it must be one who is not alpha. She will definitely take over! :-) (Last night, she got to be in the family room with all the dogs. She just nestled in and rested-- the others didn't care if she was there-- they are so used to dogs visiting-- except for Cranberry and she went and pouted in the kitchen!)
Posted by Linda at 5:00 AM

Is Ms Cranberry over her pouting yet???

Poor Cranberry, just when she hopes you are done with Peke visitors, more come in;)

Daisy is super cute, I love that last picture of her!

Love the name! Daisy sure is a pretty little girl. I didn't realize there were such size differences in pekes.