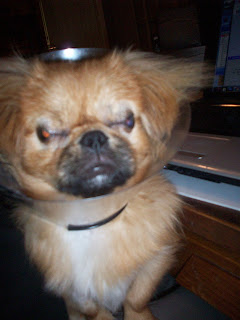 Abner had emergency eye surgery today.    These pictures of Abner have been taken within hours of his surgery.   As the opthalmologist/surgeon said, "He looks pitiful." 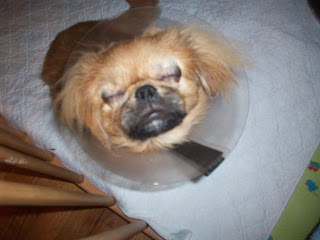 I bought a velcro, clear e-collar for him, so it would be easier for him to see.     His diagnosis was "Macropalpebral Fissure Syndrome, SEVERE and Medial canthoplasty surgery.  He also had a deep, chronic severe ulcer.   He had a severe puncture wound (actually four) on his left eye, it had probably already come out a lot once (at least).    His eyelashes on both eyes were also growing into his eyes, which made the hairs to rub on the surface of the cornea, causing scarring, pigmentation and irritation.    He also had a difficult time closing his eyes and the center of the cornea was getting dry.    This all led to chronic ulcerations and scar tissue formation, and he was a high risk for prolapsing his eyeballs. 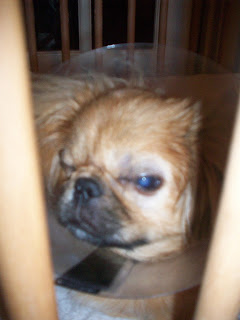 He is in a playpen when I can't hold him-- here he is peeking at me.    His eyes are closed more than they will be once the stitches are out-- there is an "extra" stitch to hold the surgical stitches in.    This surgery is usually only done on dogs who are full grown, but we didn't have a choice.    Abner was in danger of losing both eyes. 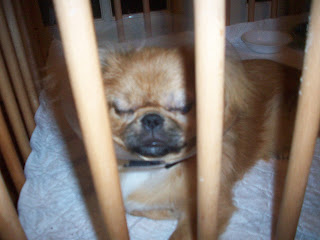 When I hold him, I am getting kisses and he is wagging his tail-- he looks worse than he feels.   I'll keep updating you!  He is one sweet  puppy!
Posted by Linda at 1:00 AM

Oh what a brave guy! he must have been in shocking pain and I do hope his eyes are saved now.

We all send our love .

Veterinary Opthamologists rock! I really think more Pekey (and all brachycephalic breeds) eyes could be saved if they were consulted initially with eye issues.

I am glad that you got Abner to the eye doctor right away. Sounds like it was just in time. I am glad he is giving you kissses. I know he must be a bit confused right now but he will be so happy in the long run!