Warning on Promeris: I received this warning and want to pass it on. Just check with your vet.
++
This is extremely disturbing news. Stick to the tried and true...
AMI wanted to share with the group something that happened to one of my babies. I recently took one of my dogs to Fortpayne Alabama to a vet there. He is an hour from me but, I like the way he interacts with my dogs. While there, I decided to get some Frontline. He explained that he had patients unhappy with that product and began carrying Promeris. I hadn't heard of this product but felt he wouldn't carry it if there were problems.I applied the product to seven of my dogs one afternoon. Everyone appeared to be fine however, Banjo(Shepherd/Collie X) vomited a bit of grass but, that wasn't alarming to me. I never left the house that night but was upstairs in my office working. When I came down stairs Banjo wasn't at the hallway door where he always waited for me. I found him in my bedroom laying on his pillow his little head between his paws, his eyes staring. I called for him, no response. My boy was dead. I couldn't understand what could have happened to my baby? He was only 4 yrs old. Beautiful, healthy, energetic boy. It was a holiday weekend(Sept 3) so I called the crematorium to see if they would allow me to freeze him until I could get over the shock of this and figure out what I wanted to do. It suddenly hit me,the promeris? I called my vet were I purchased this. He agreed that it was very suspicious and requested that I bring Banjo to him for an autopsy. As much as I didn't want to do this, as a rescuer,I felt it would be irresponsible not to follow through.Our suspicions were accurate. The chemical in the product shut down his motor cortex at the base of his brain. It appeared that the neurological inhibitor put my Banjo to sleep. His application was for less than his body weight. The vet said that if he had gotten the full dosage he would have been gone in 30 minutes. The product takes 8 to 10 hours to get in to there blood stream. Banjo was dead 9 hours after his application.The company(Visor)that makes this product has asked for a pathology report to be done. Dr. Lee sent more tissue samples off to Auburn University and we are waiting for the results. Not certain the tissue will still be viable. Please tell everyone you know to stay clear of this flea/tick product. It's a roll of the dice and not worth the risk. I have 6 dogs that appear to be o.k. but, Banjo lost his life. I don't know that I have ever felt such heartache. I will fight in his memory to have this product pulled or at the very least have the wording"this product could be fatal to some dogs"added to packaging. My vet boxed up this product and sent it back to Visor after his autopsy findings. He said he would not carry a product that could harm a dog in this way. Thank you Dr. Lee. Sincerely,Beth Ann Webb Wet Noses and Wagging Tails
++++++++++++++++++++++++++++++++++++++++++++++++++++++++
THEODORA>
This is Theodora, who was adopted 5 years ago. I remember transporting her from Maryland-- she had been spayed in the shelter and hadn't been bathed first. (How can you do surgery on a dirty dog??) Theo smelled so badly that I felt awful taking her to her new home. But, you know what-- they loved her anyway! And have continued to love her since then. I love adopters like this-- they see past the smell and the "view" and love the dog. 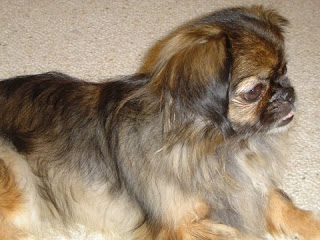 Theo was checking out her new environment-- I think she knew she'd be safe there. 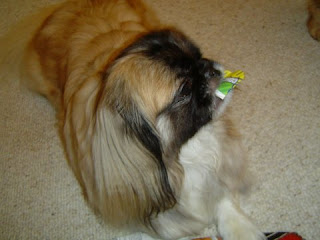 She joined the family who had beautiful JR. He was a rescued Peke from Carolina Rescue. 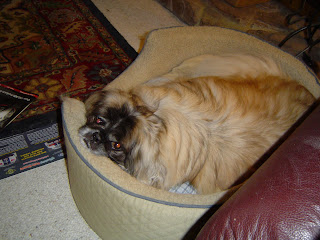 JR is doing great-- Theo and he are not best friends, just friends who steal each others treats for fun. He's very cuddly and uses his cuteness to perfection. He has his mom wrapped around his little paw and knows exactly how to tug on her heart strings . . . 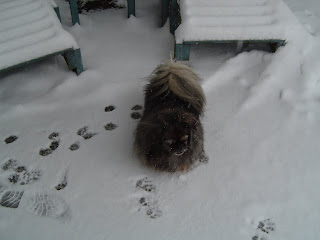 Here's Theo during the snow we had last winter. I love the little tracks. Theo is 14 now!! I love when people will adopt older Pekes-- they have so much love to give. I love the older ones! 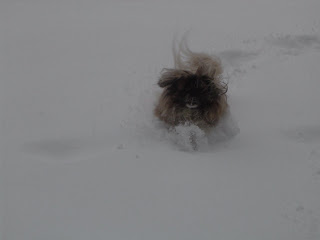 Theo is now about 20 pounds-- but she's a big girl. She's lost a little of her hearing, but other than that, she is doing great. She is a sweetheart. She still has a lot to "say" whenever her mom and dad come home. Theo has trained her parents pretty well. While they don't always do what she wants, she usually gets her own way. (Don't they all!!) 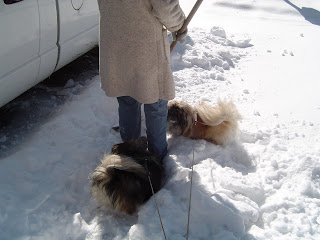 I don't know about Theo and JR, but mine love the snow! We don't get much of it in Virginia Beach, but when we get it, we are very excited. (And then, I go inside and stand in front of my gas logs!) 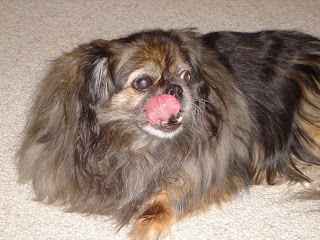 Her mom told me this: "We couldn't live without both of them. I don't have any current photos here at work, but I've attached some from this past winter when they were supervising our clean-up efforts. (I feel cooler just looking at these pictures). Thanks for all you do and for taking in the peke's in trouble. You and your group provide blessings to all of us adoptees. Thank you, all!"
THANK YOU for adopting Theo-- she couldn't have a better home. It is what I want for all of them!

Linda, please tell Theo's family that my Lulu lived to nearly 17years old so she has lots of time to be cute!

Adorable pekes! So glad they have a good home! And terrifying about the Promeris - thanks for the warning.

LOL, love the snow pics. Newmie and Drizz LOVE the snow too..so much fun for them, lol.

JR and Theo are stunning! Theo has that expression of "Yep, I'll be treated like a princess here."

Thanks for the warning about Promeris - how awful! I absolutely HATE using Frontline on my little dogs and it takes everything I've got to bring myself to apply it. I don't use it every single month like they recommend. I just ordered a natural herbal spray which needs to be sprayed on twice a day to repel fleas, so we'll see how effective that is. Some of our local vets are advising against Frontline because fleas are becoming resistant to it in our area. I always thought the smaller dogs were more likely to have a bad reaction, but this proves that's not the case. I'm so sorry for the owner this happened to.