BERNIE TO THE RESCUE 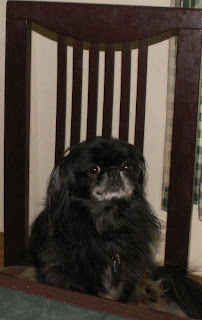 Bernie was adopted by Essie and her husband, Kevin. Kevin and Bernie are BEST Buddies!!! Bernie loves his daddy!! 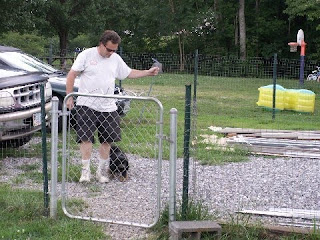 Here he is with Daddy. They bonded the moment he arrived at his new home. 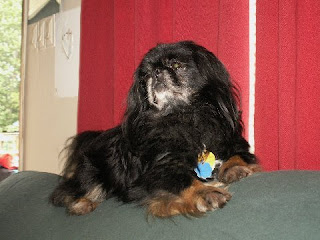 The other day, Kevin was out working on putting the roof on the shed. Essie was inside and had the TV on while she was cooking in the kitchen. She heard a loud banging and thought Kevin was hammering something together. Bernie ran to the front door and was trying so hard to get out. He was barking and growling. Something was really upsetting him! 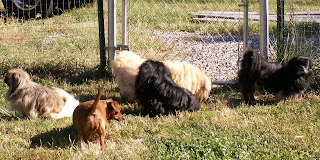 Essie heard the banging again and went to the door to let Bernie out and see what he was doing. Bernie ran to the gate and before Essie could get it shut, he ran out. 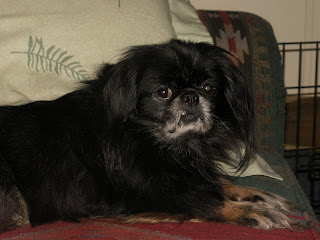 He went straight for the shed and Kevin had tipped the ladder just enough where he couldn't move or he would fall. Bernie was going crazy until Essie got in there to help Kevin get the ladder straight and steady again. 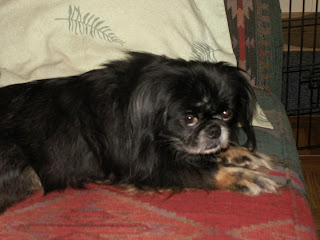 Bernie knew is Daddy was in trouble and needed help. Now that is one smart boy! 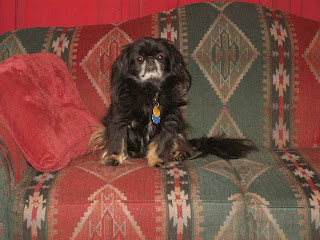 I think he should be the Peke of the Day Hero!!! He looks like a hero to me!
One of Bernie's sisters is Meggie Mei-- she is REALLY trying to get Giz Moe Li to play-- but he's not budging!! http://www.youtube.com/watch?v=pENSZcuSZHY&feature=channel I love this Peke family. :-)
Posted by Linda at 5:00 AM

Bravo Bernie!! That is a superdog!

Hi Linda, just got in tonight and I am tired but , I MUST check out "Must love Pekes" before I go to bed.

Yay Bernie!!! That is a great story:)

Bernie is a Hero! What a sweet boy just wanting to keep his family safe, he probably told Dad to be careful too before he went outside with one of those precious Peke looks!

He is always on the prowl watching us. He really is one awesome little boy. Cris yes he did give daddy that look. ggg He sleeps by me either next to my pillow or on my side of the bed next to my sholder when I turn over that way. When he hears something that doesn't set right with him he lets us know. We just love this baby boy so much. He is a one of a kind.

lady jicky.....welcome back. We have missed you !!! Hope you had a good trip.