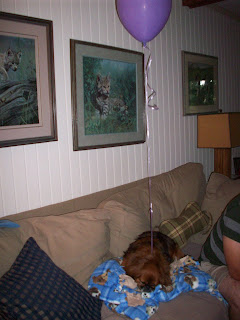 We had a birthday party for my grandgirls and great-niece a few weeks ago. Kai Kai got right into the spirit of it. He was thrilled to have a balloon tied to his collar. Don't worry, it was there long. 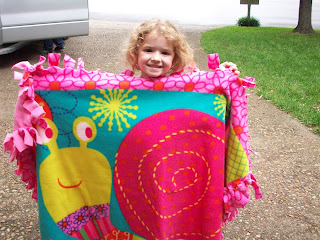 The girls even received special blankets made by Michelle in Massachusetts! If you were at the picnic, you saw we had a lot that were donated to raise money for our foster dogs. Bitty Bit loved hers! 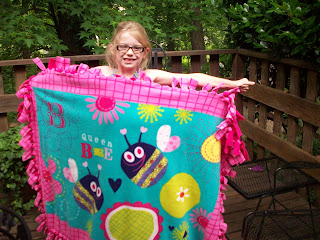 Lil Bit loved hers, too. 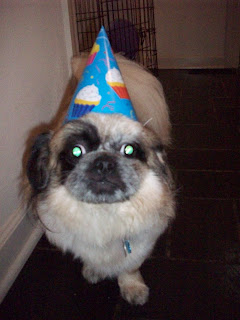 Harper was still here then, and he got to wear a birthday hat. He was so happy-- can't you tell? 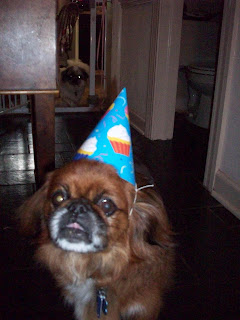 Kai Kai-- are you sticking your tongue out at me? 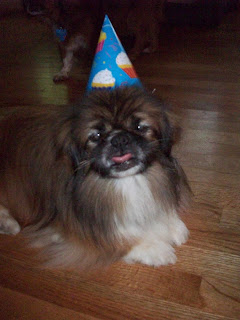 Scooter is for sure! But, his tongue is so big, it usually doesn't fit in his mouth. 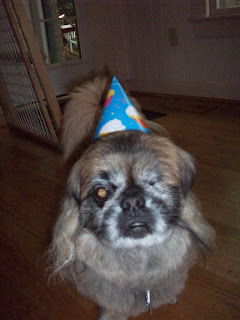 Max just tolerated the hat. It didn't stay on long. Max was one of my foster dogs who wasn't adopted-- he's almost nine! 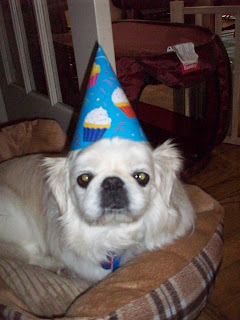 Cranberry couldn't believe I humiliated her so much by putting a hat on her. She's almost eleven. She doesn't move to well now, but she did just lay there while I took her picture. 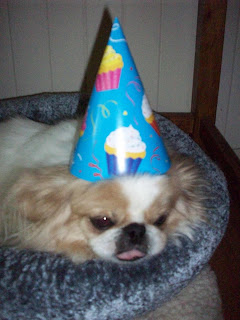 And then, of course, there's Starlight. Her tongue usually isn't out-- but it was when I put the hat on her head. She puts up with a lot around here-- with dogs, grandkids, and fosters coming in, she has a lot to deal with. But, she's a good sport and she let me put the hat on for a few seconds. Then, that was it! ;-) We had a great birthday!
Posted by Linda at 1:00 AM

Happy Birthday to you all!!!
Love those blankets and love those party peke's!!!!