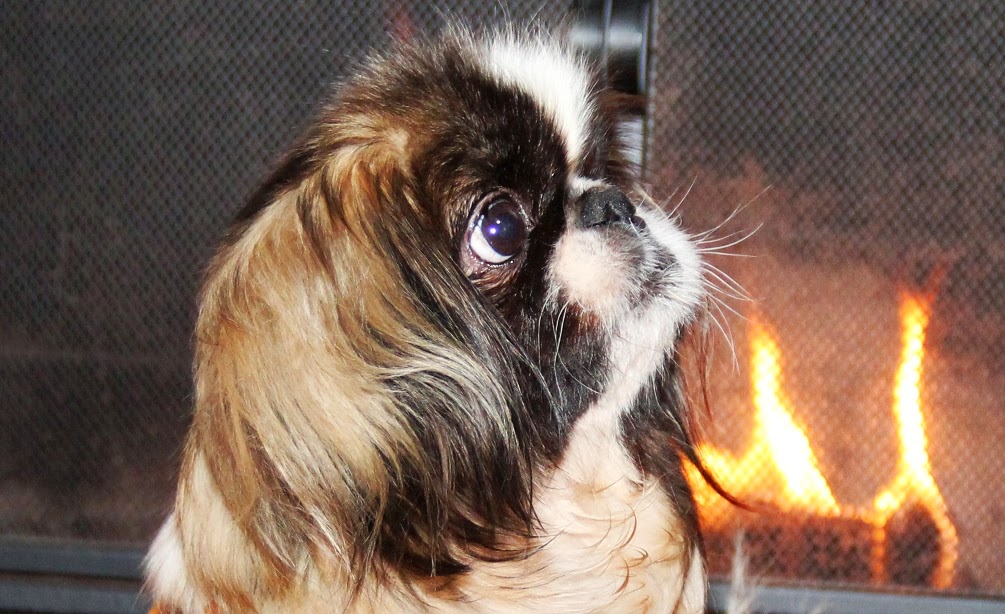 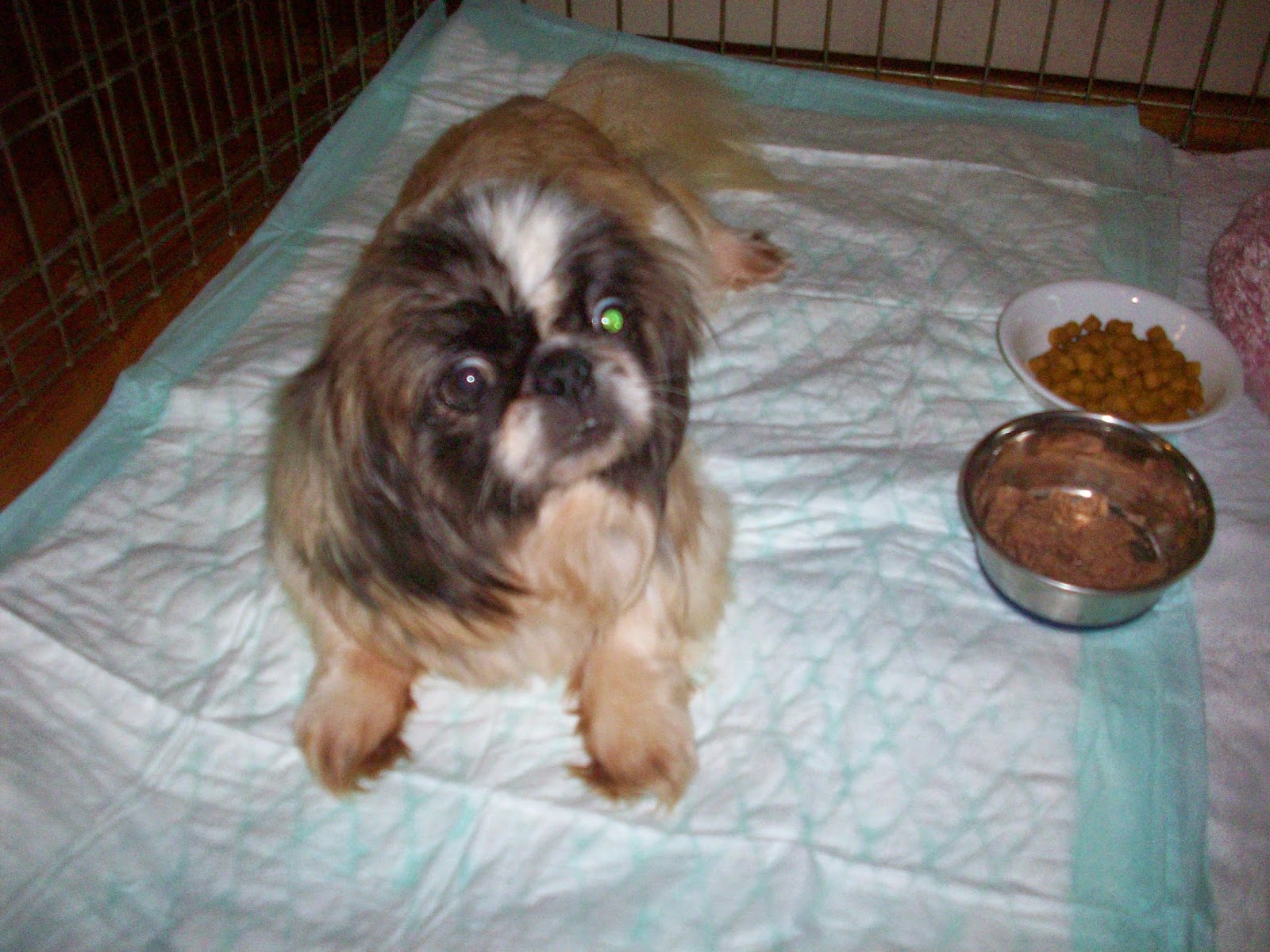 She was an underweight, very sick Pekingese. 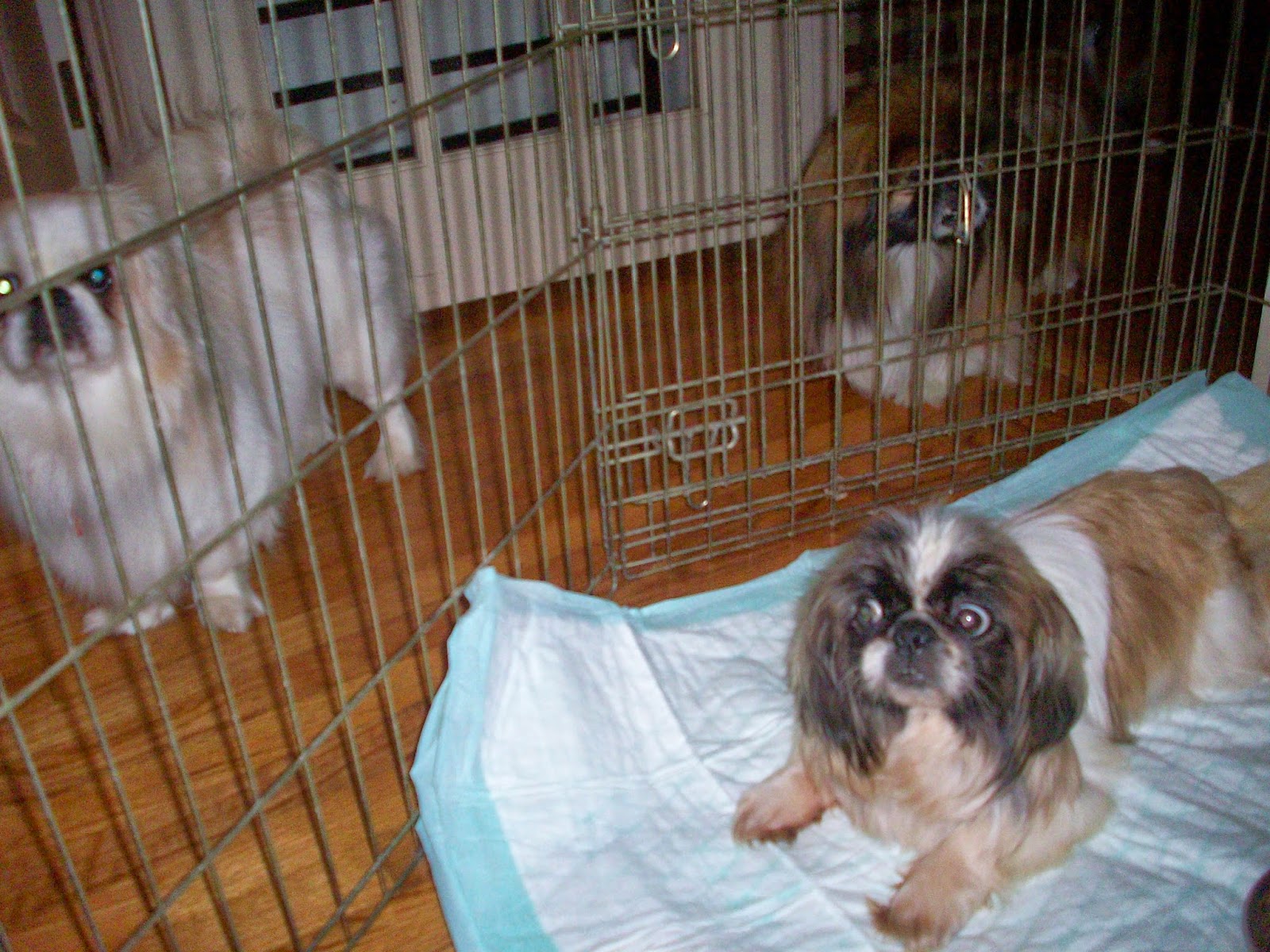 He gums were almost white-- she was very anemic. We took her immediately to the vet. 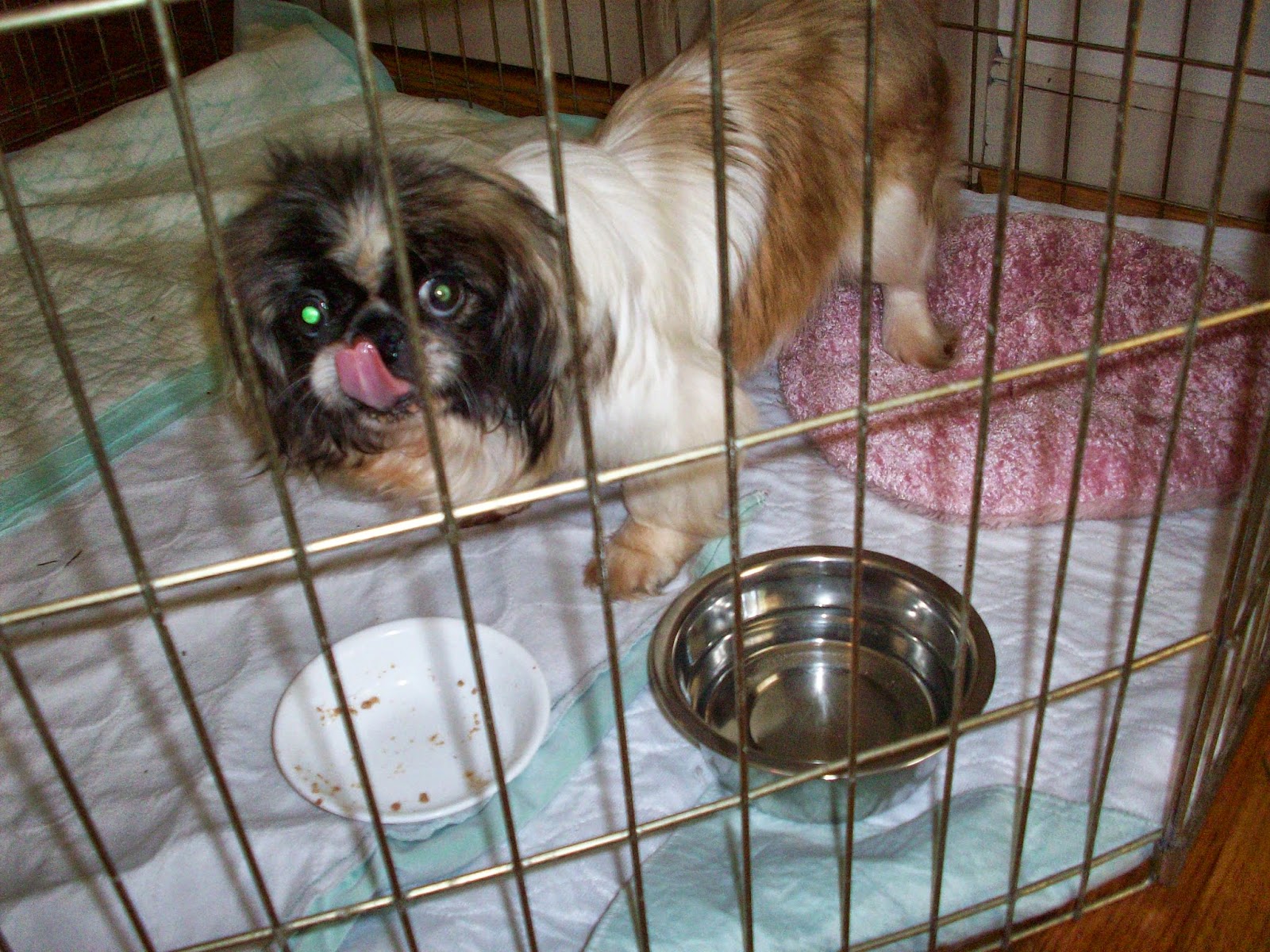 She stayed in my office, resting in an xpen, where I could keep an eye on her. 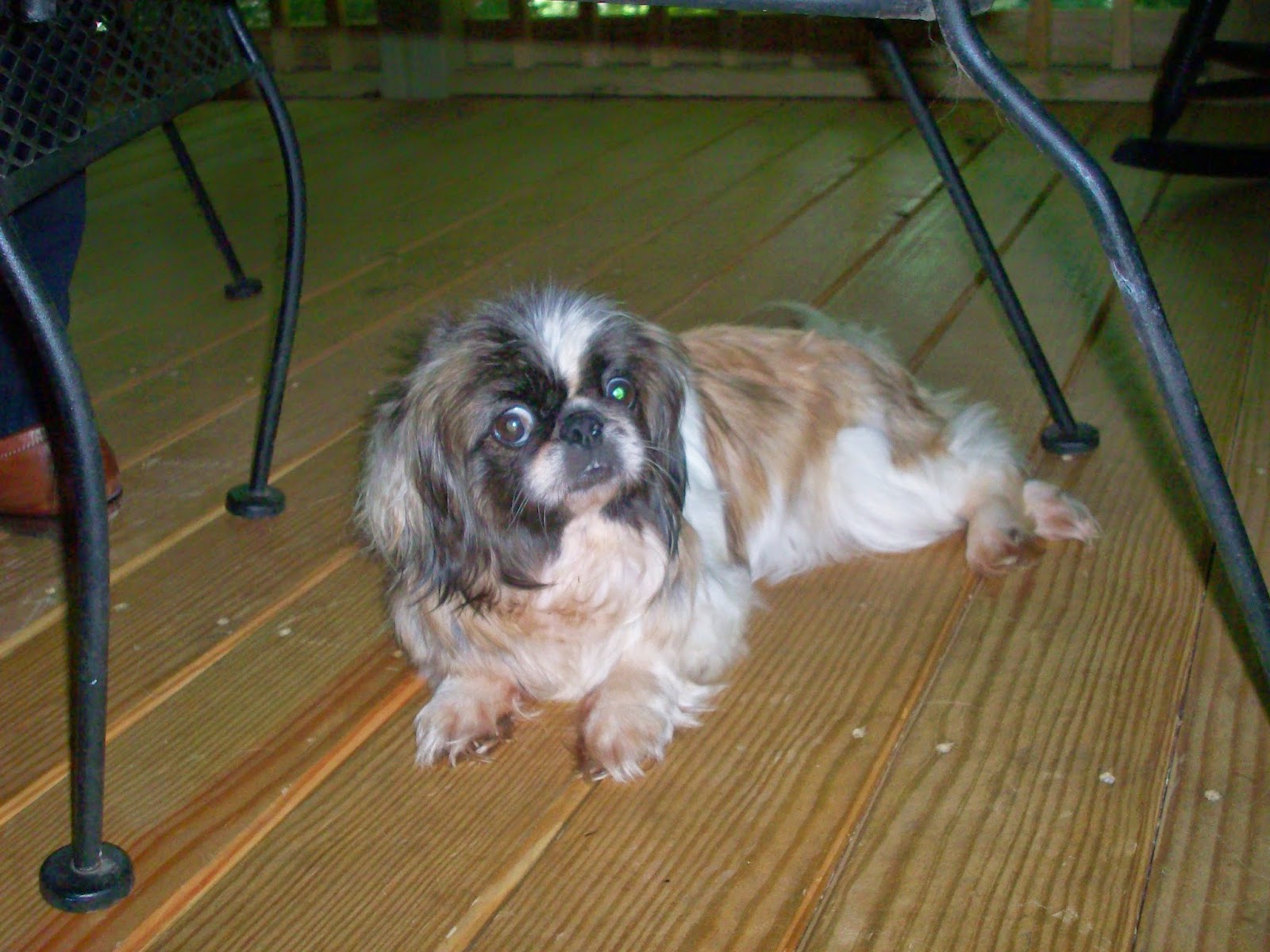 She wanted to be wherever I was.  She had been kept in an outside pen in her other life, and she was afraid of being left.  Don't worry, little girl. 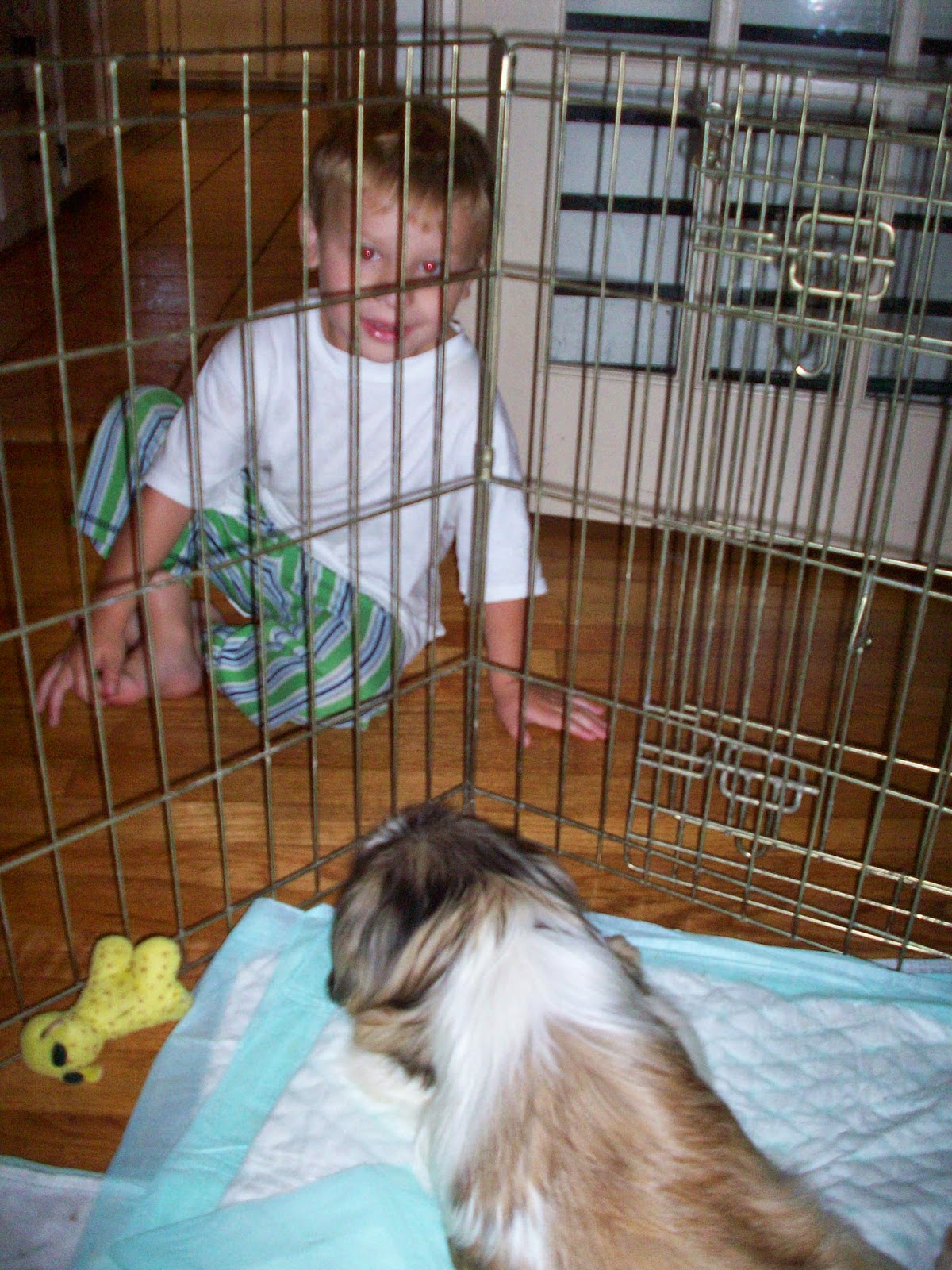 Beach Bit watched over her also. 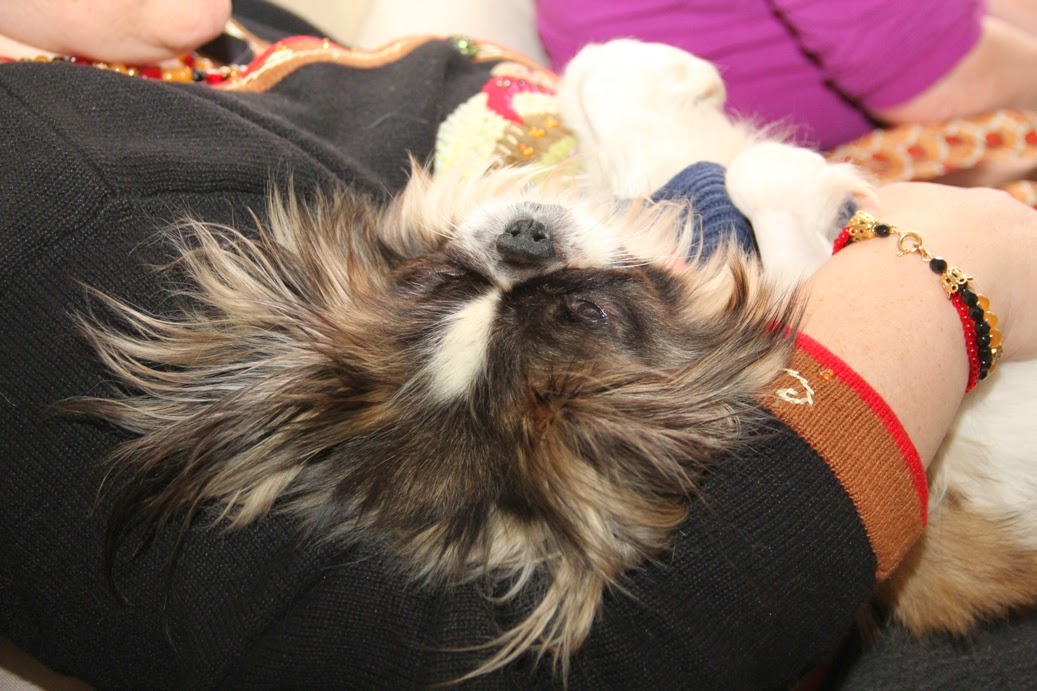 She adored being held. 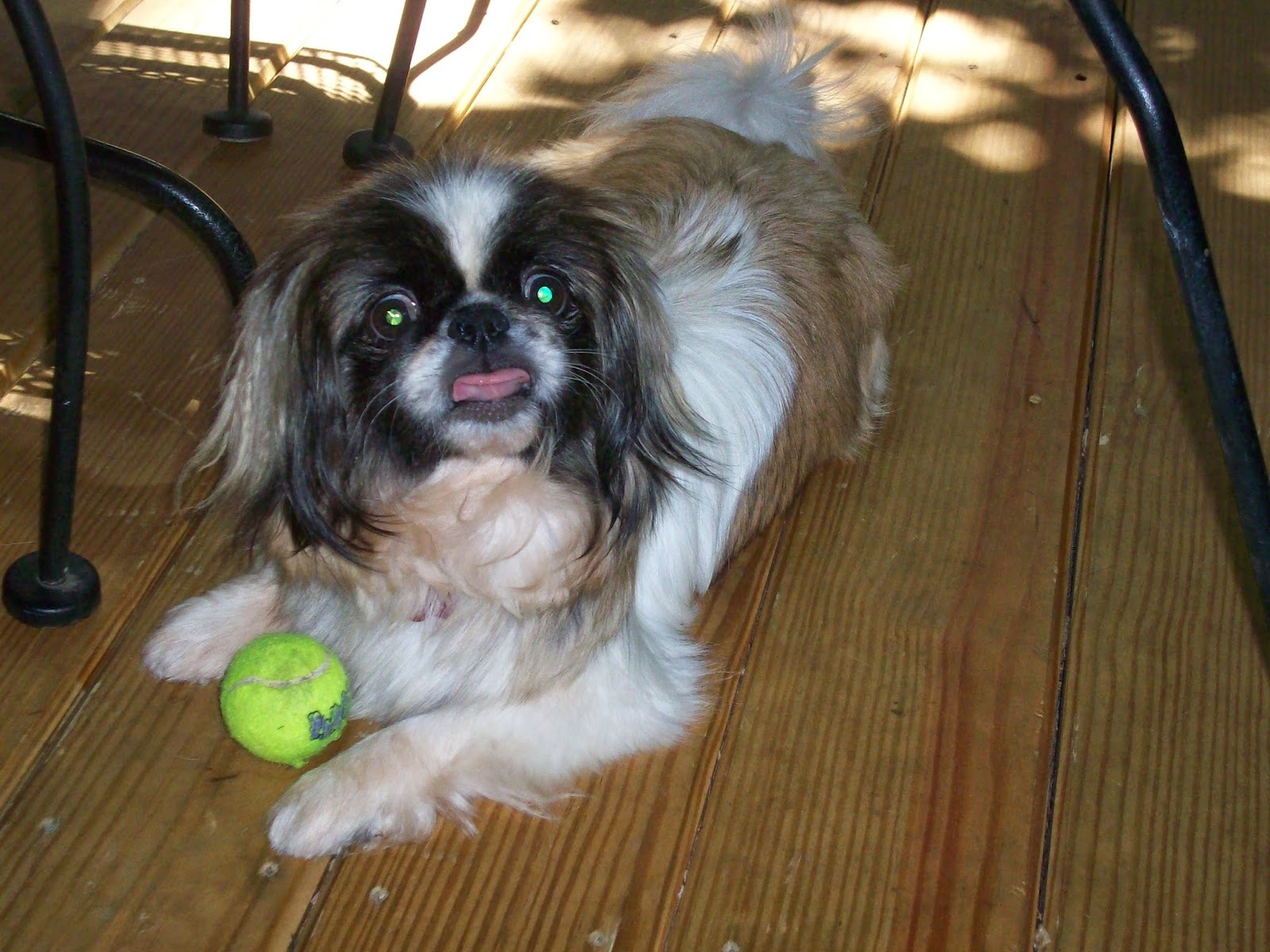 She had two transfusions when I got her-- her red blood count was dangerouly low. 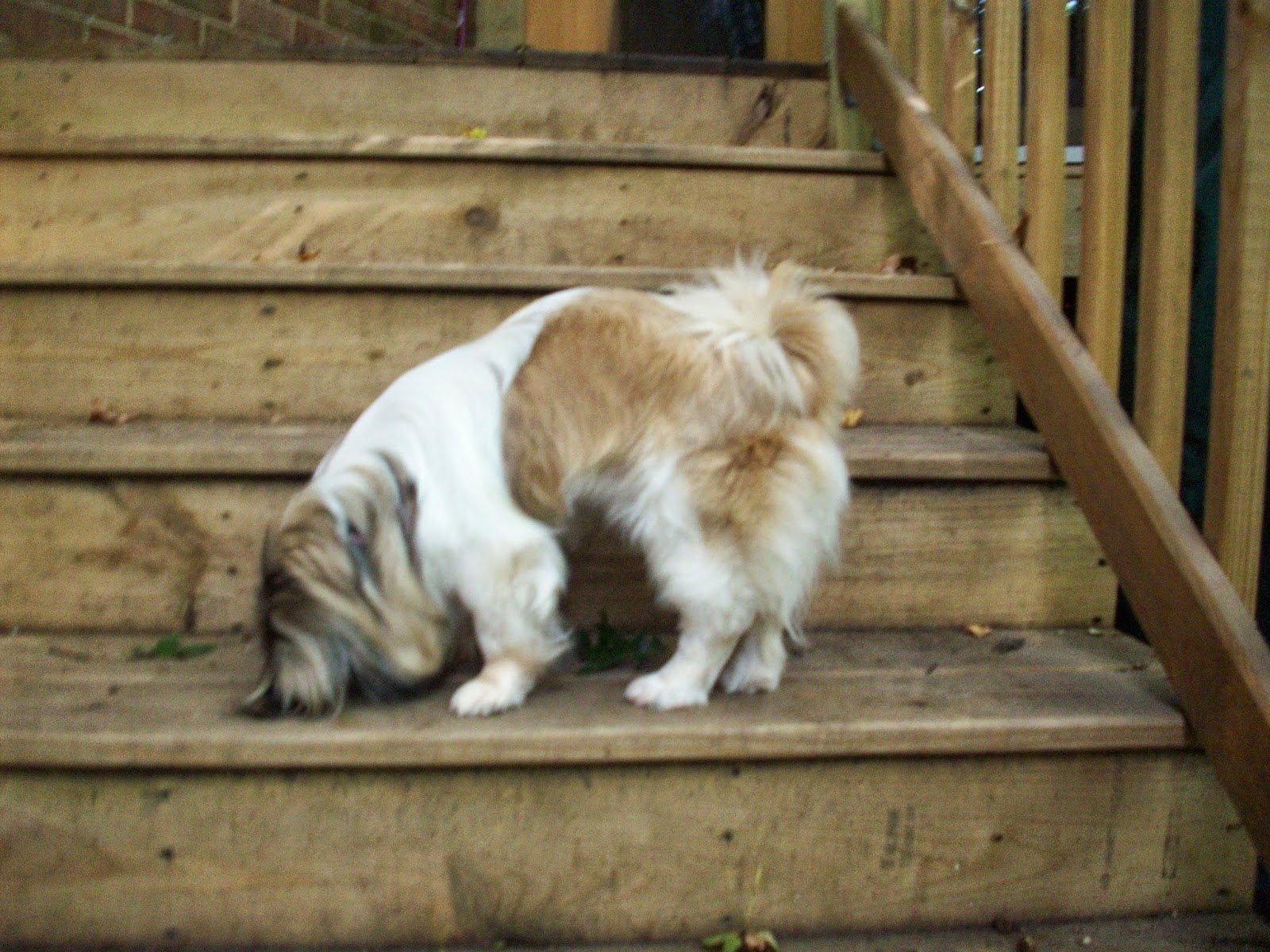 She ate, gained weight and began to take a lot of medicine. 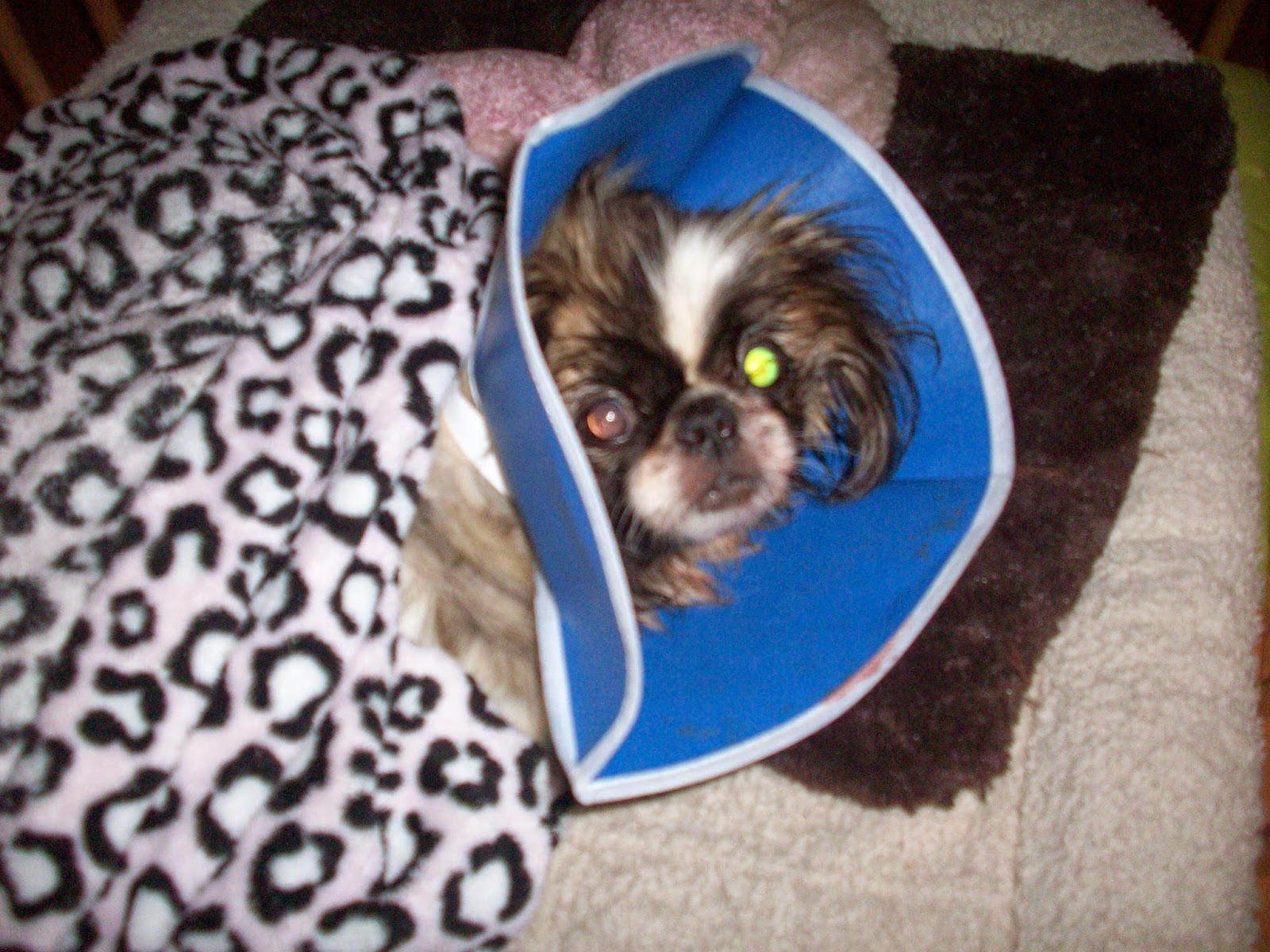 Her mouth and teeth were so nasty-- she needed a dental badly.   When she was stable enough, we were able to do that.  She had a fistula from her mouth up to her sinuses, full of infection.   We fixed that. 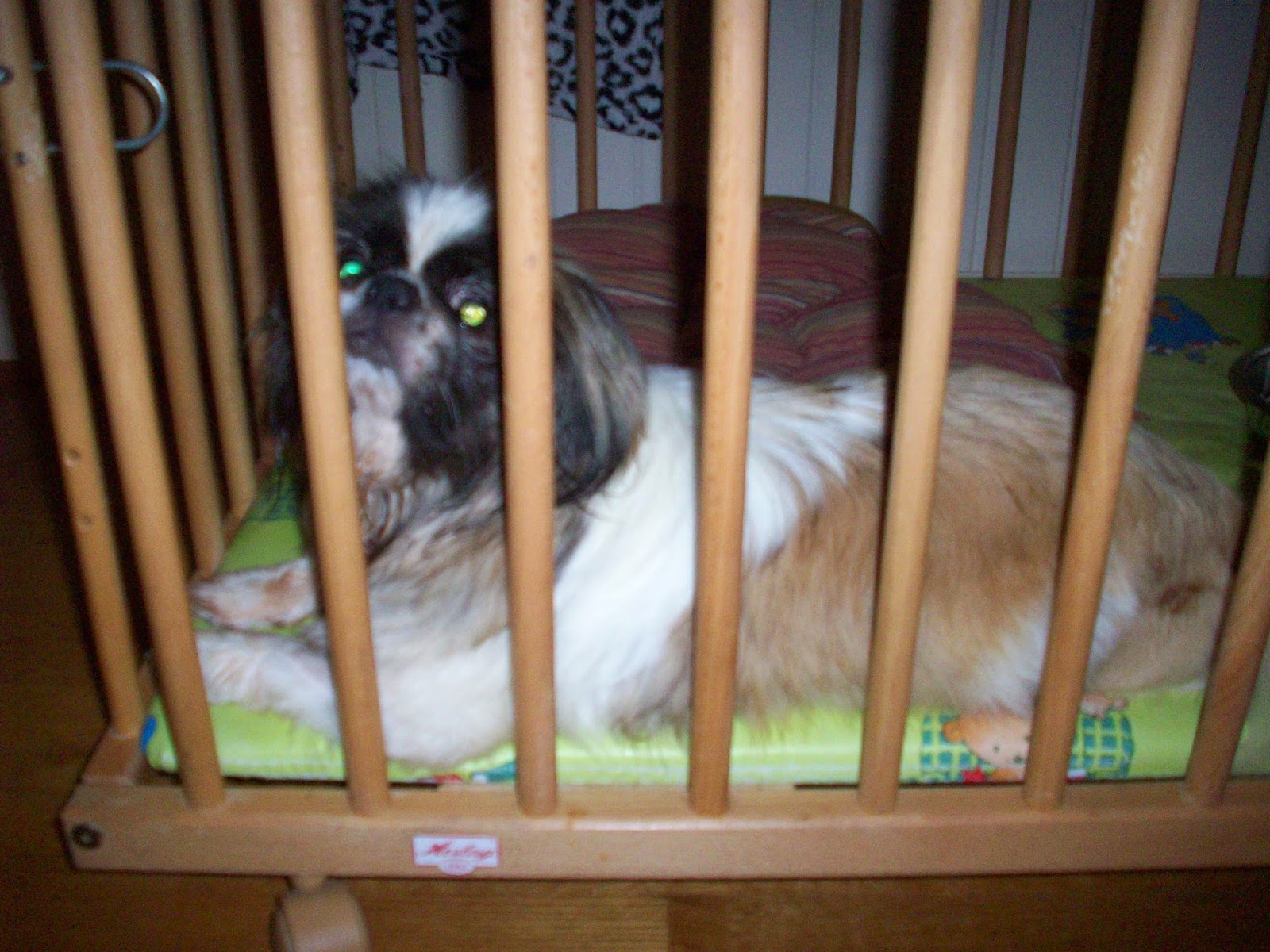 She slept in a playpen in my bedroom-- I wanted her close so I could watch her.  (Now, she sleeps on the end of the bed!) 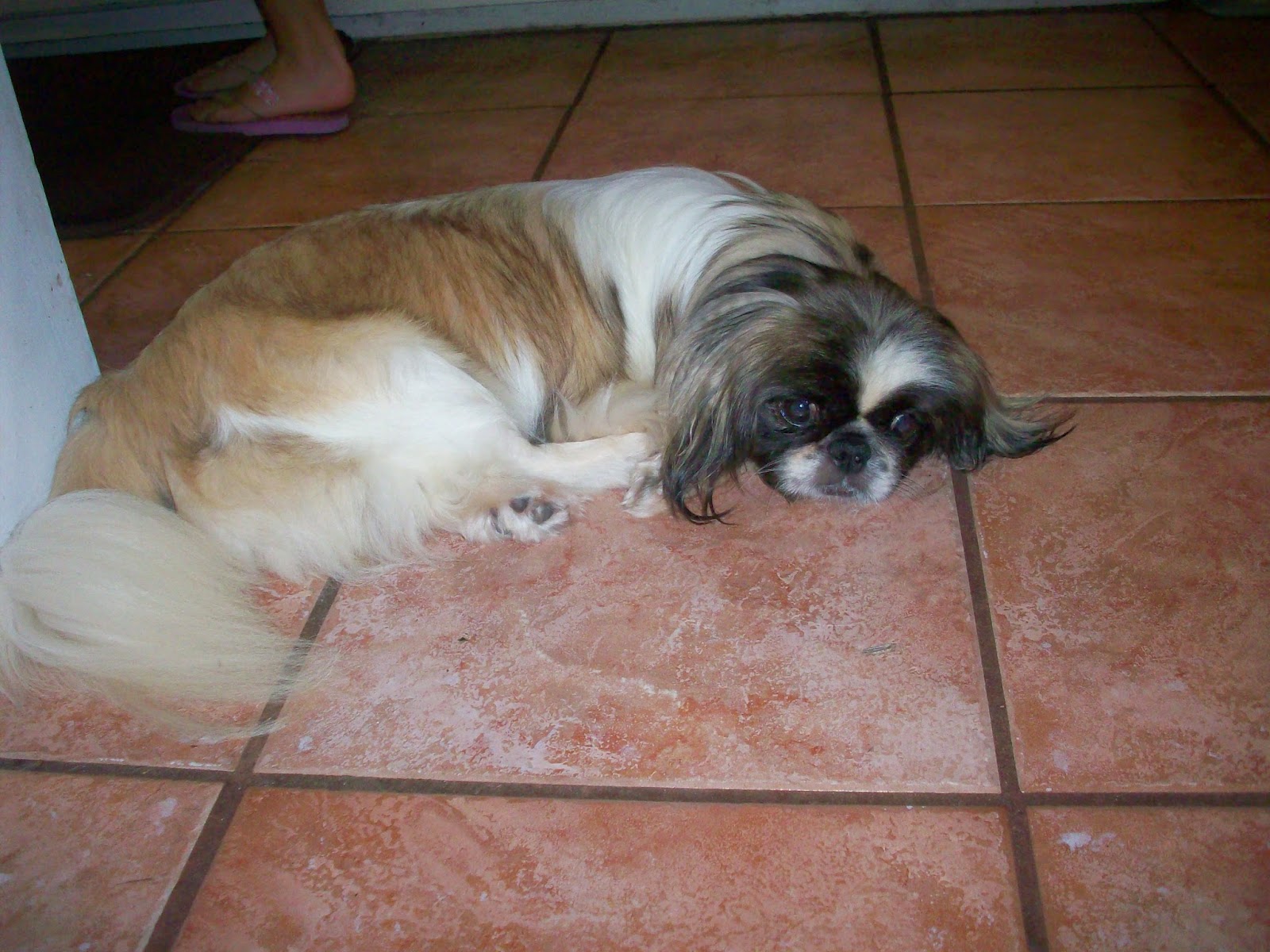 She healed from the dental (and we were able to spay her). 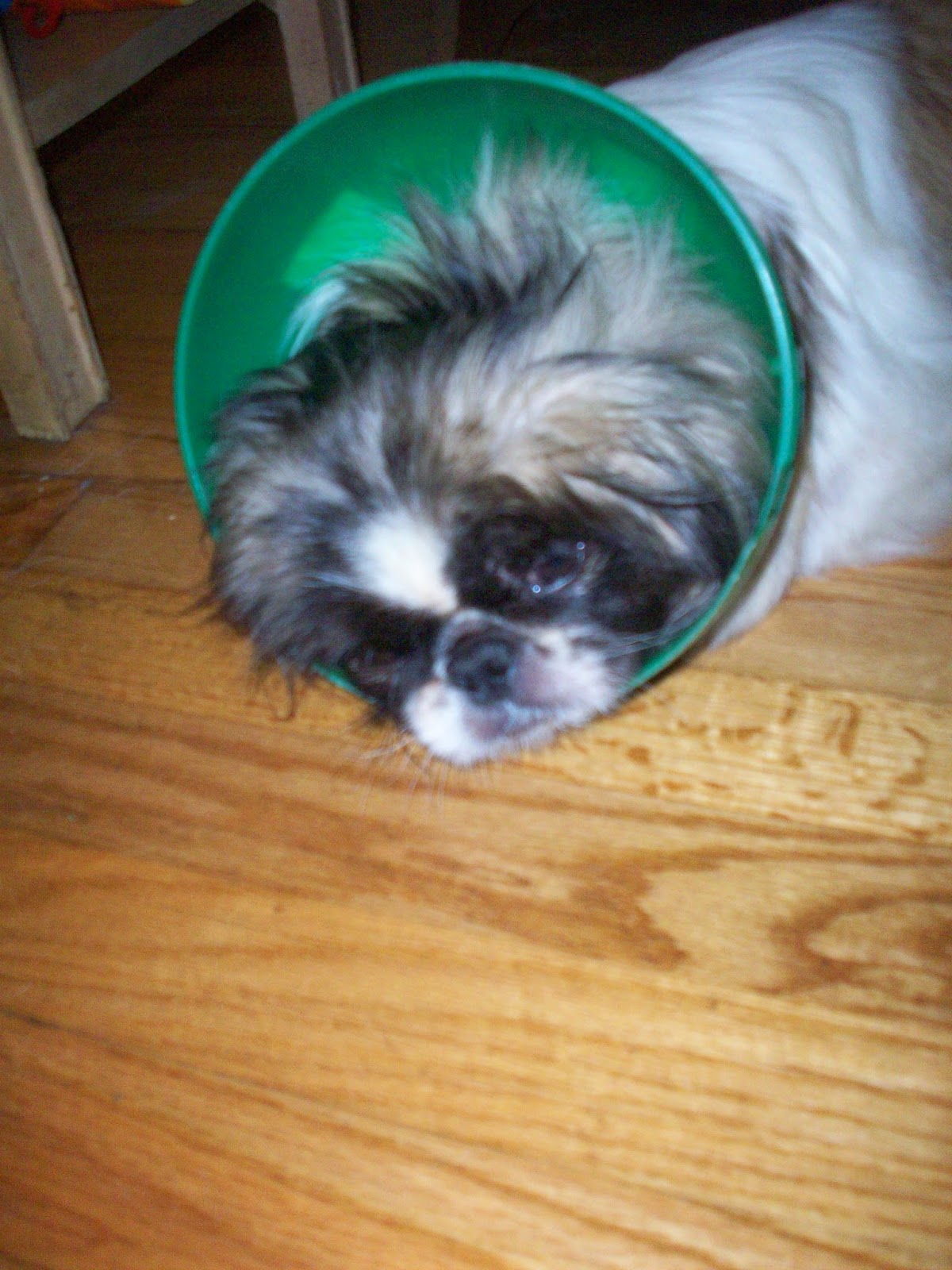 Right after surgery, she felt terrible, but that was short term.  And she was babied a lot. 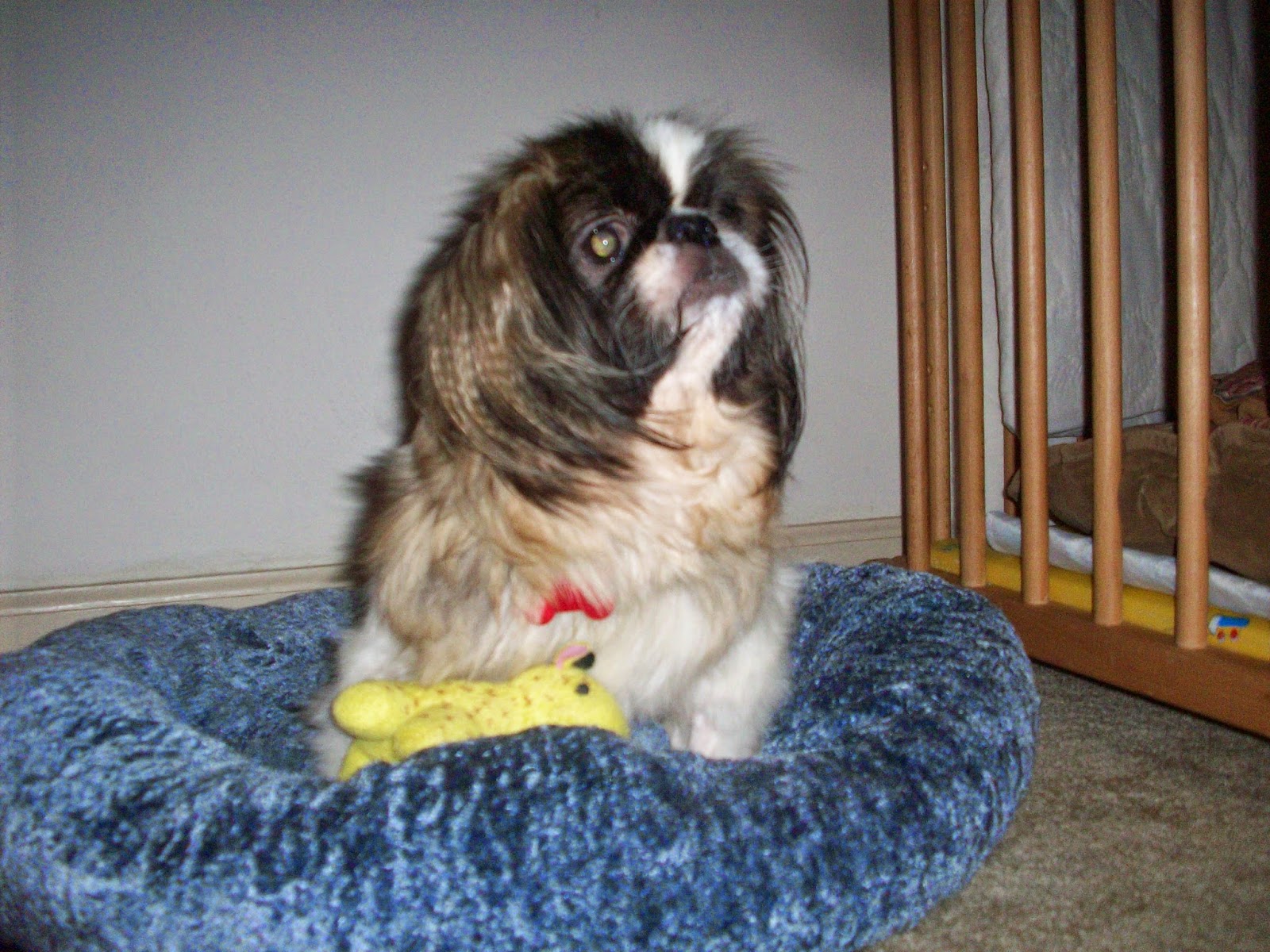 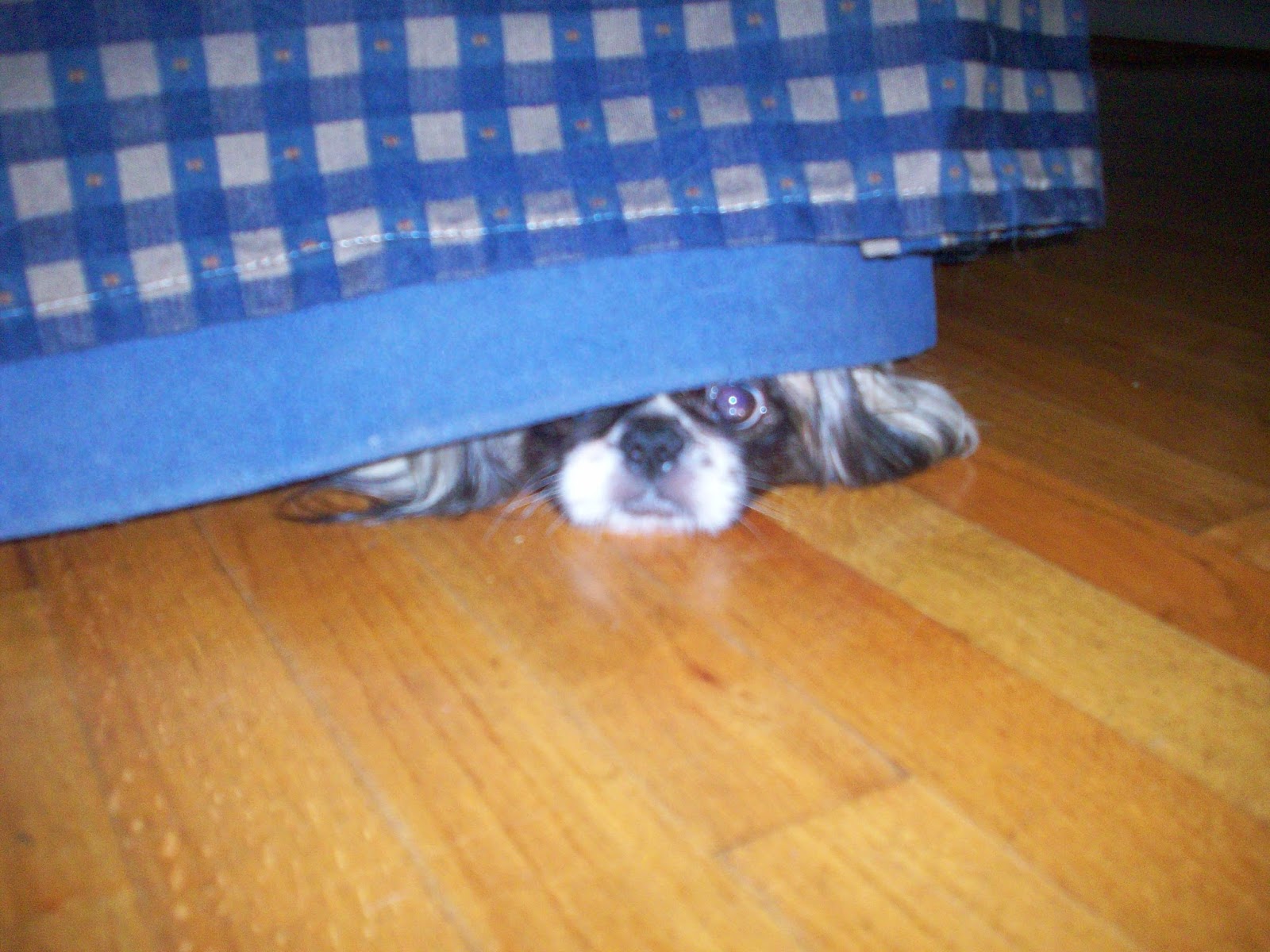 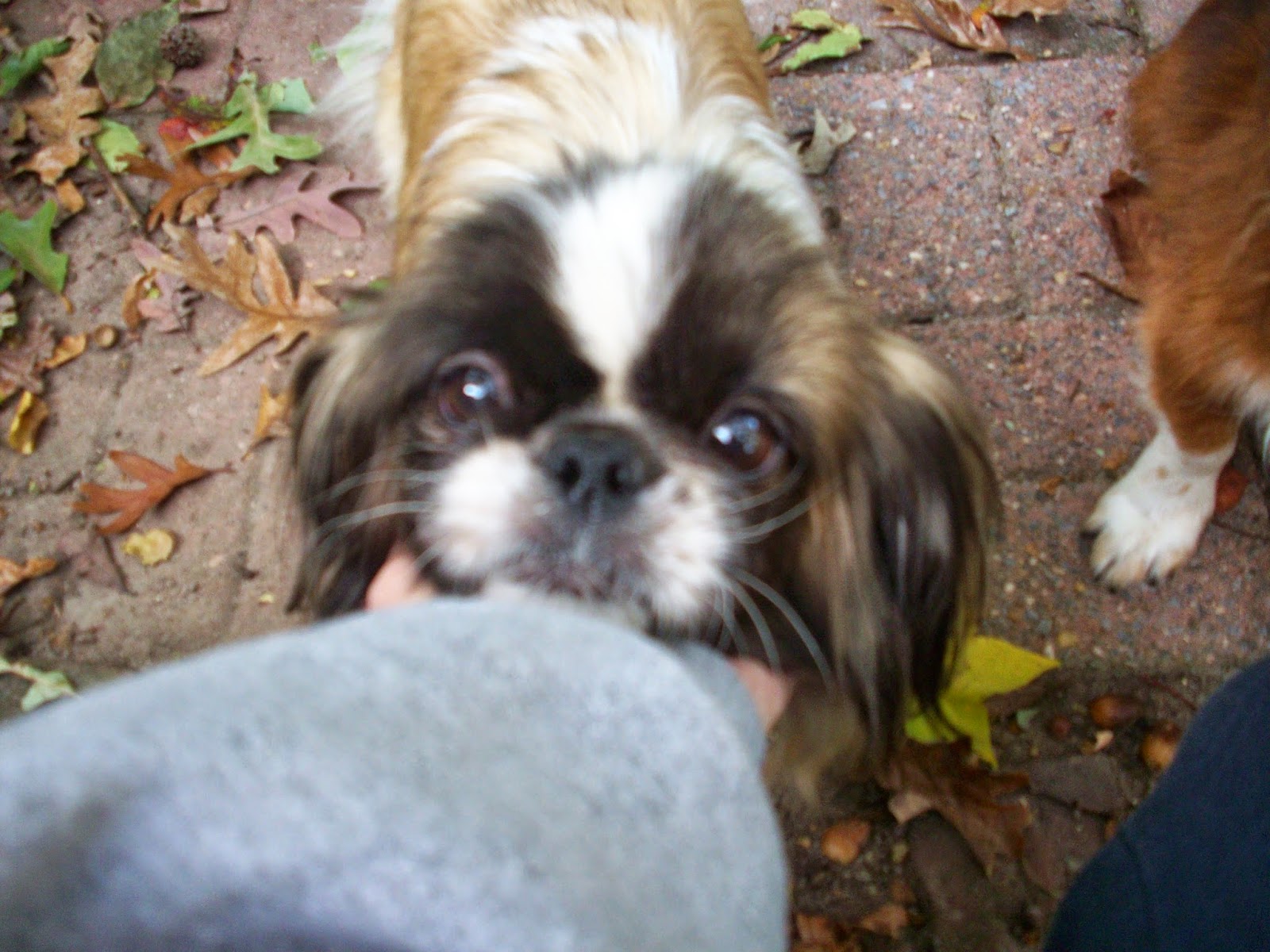 She learned I was never far away. 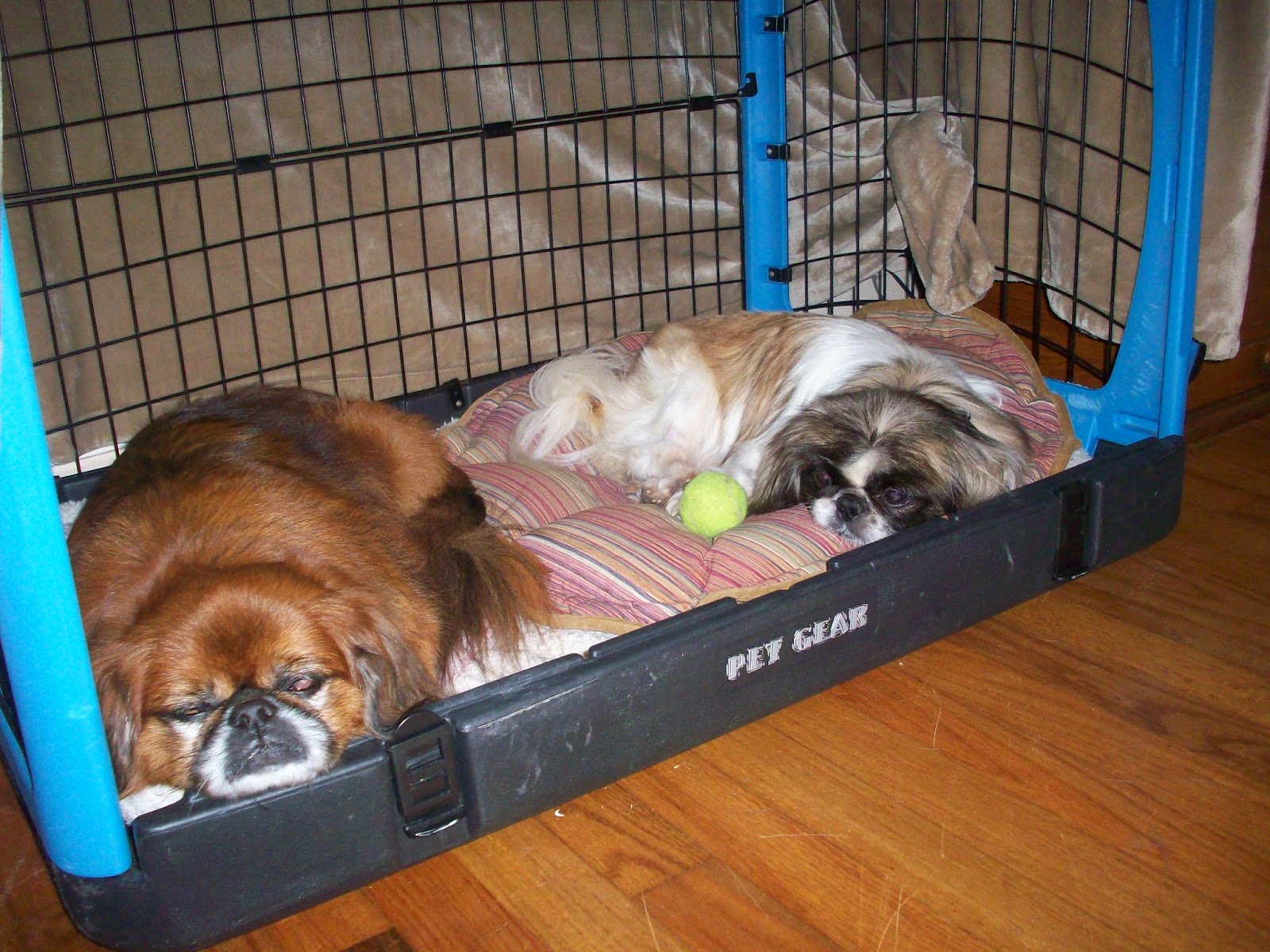 The open crate behind my desk is usually full of Kai Kai and Lexie. 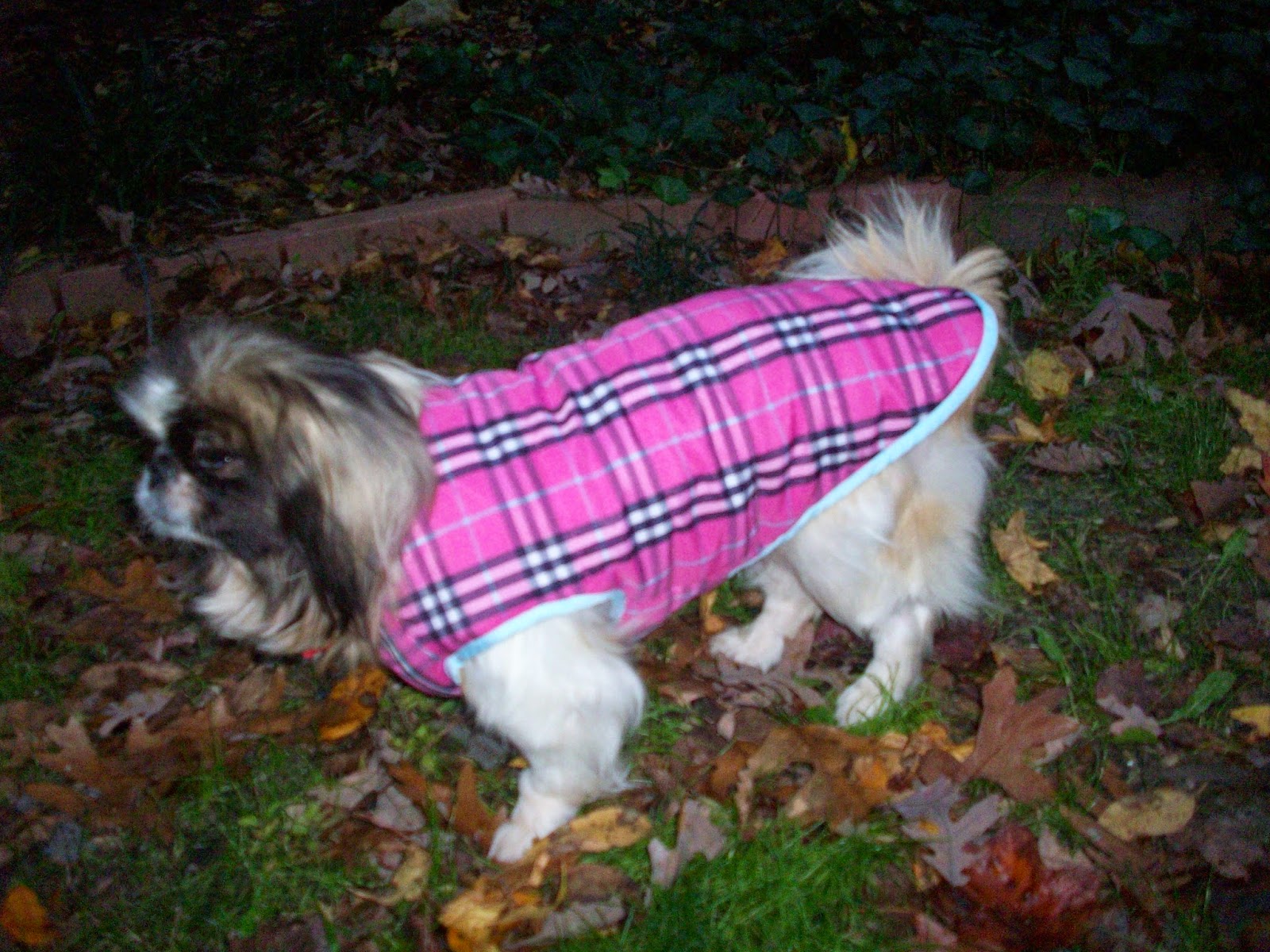 When it got cold, she wore a plaid coat and a blue sweater. 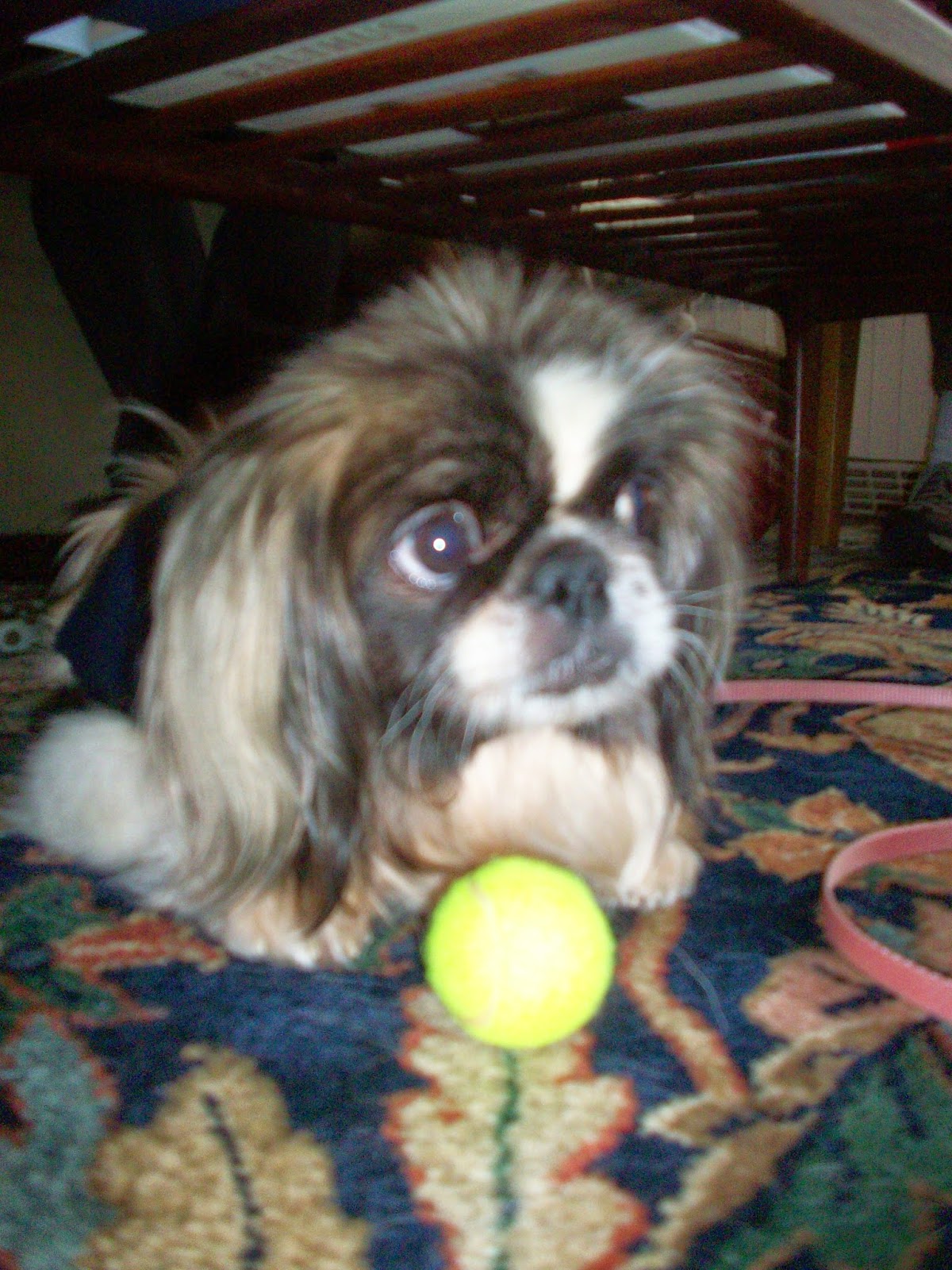 She stole tennis balls at the Peke meeting. 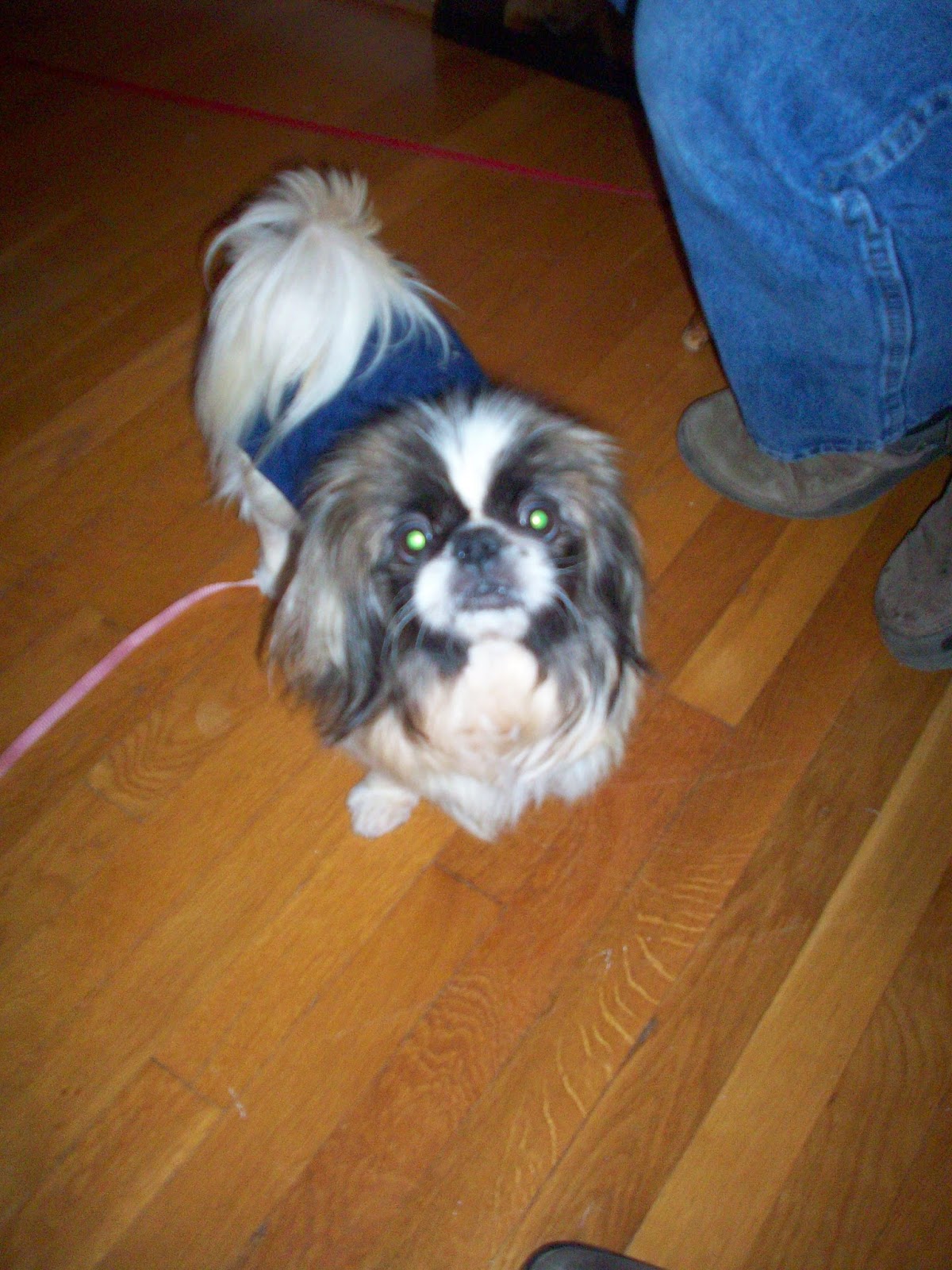 Lexie has gained weight-- is now over 11 pounds! 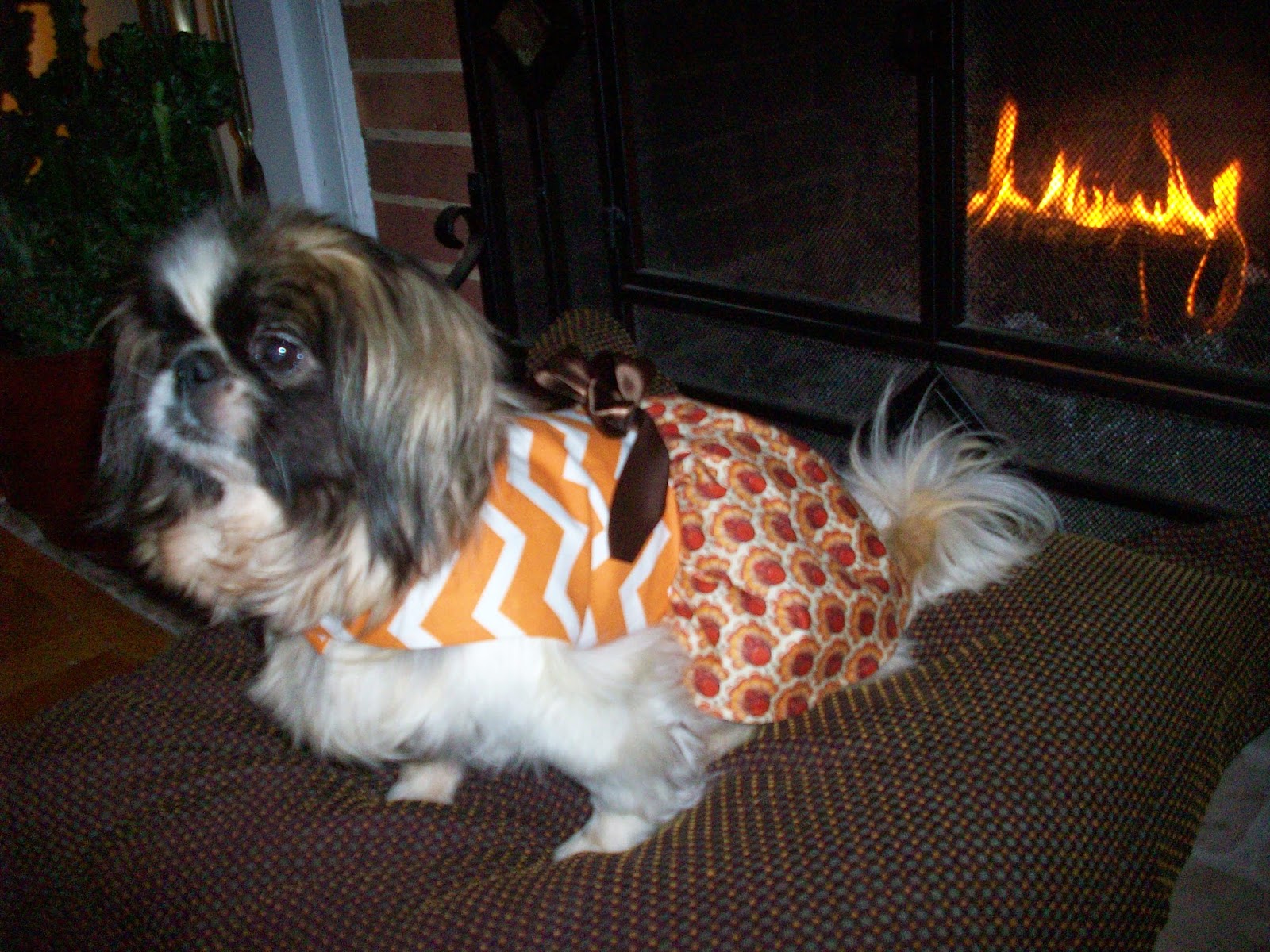 She was diagnosed with IMHA-- Hemolytic Anemia.   It is very serious.    After over 4 months of treatment, I was encouraged to also have an internist see her, so we did that yesterday.   They did a few tests that had not been done before (I thought we had done everything, but there were a few more.)     We watch her red blood count careful-- and yesterday, it was 34!   YIPPEE!   The internist adjusted a few of her medications.   We will get test results of her tests/bloodwork  next week after Thanksgiving. 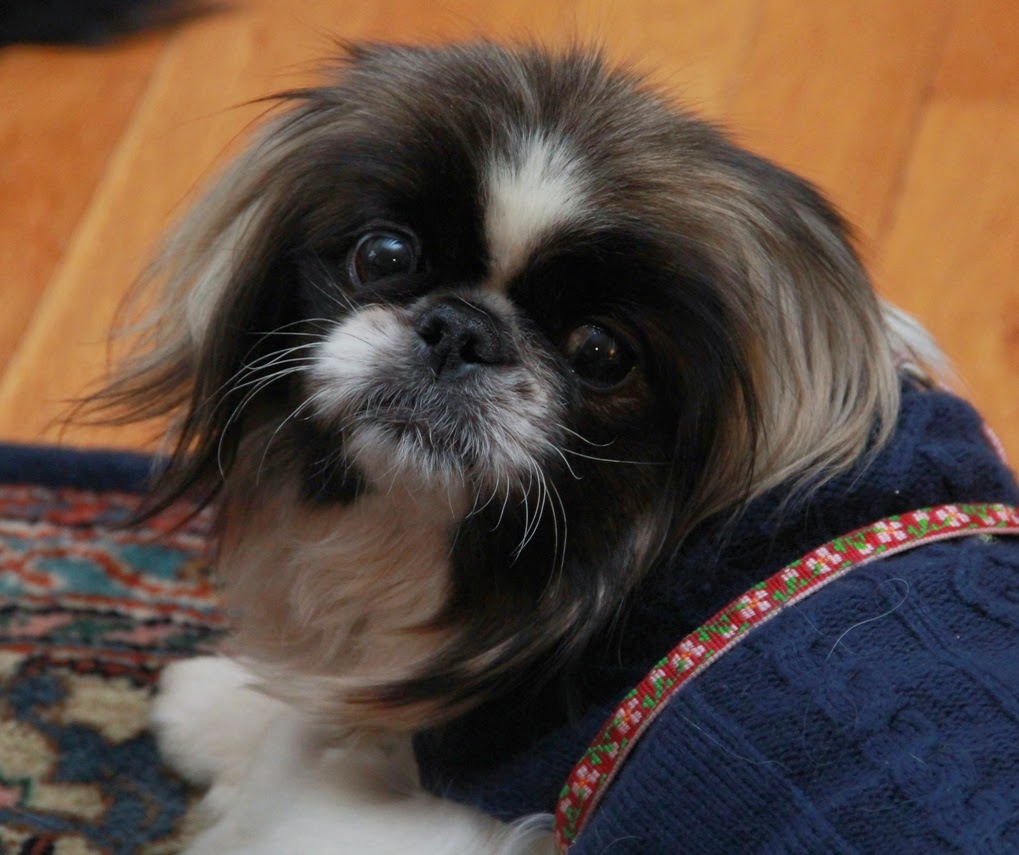 I am so grateful for Dr. Evans and Dr. Hodges who have watched over her carefully.   Dr. Evans is my vet at Acredale Animal Hospital in Va. Beach and Dr. Hodges took care of Lexie for a few weeks in Roanoke.   They have taken so much time to research this awful disorder and have done so much to help her.    Lexie is so sweet and we want her to live.     We have several people that are on her team-- Team Lexie.    Her bills are high, so if you would like to be on her team and help us with her care, please email us at either potomacpekes@gmail.com or haveninhim@aol.com.    We are so grateful to all of you who have stepped up to help this sweet girl.  She is only 5 years old-- she deserves a long life of love.    So, for all of you who are already on Team Lexi, thank you!    You are appreciated and it's because  of you that Lexie is here.    You are all the best!
Posted by Linda at 1:00 AM

This little girl was soooo sick but you saved her !!!!!

Thank you, Linda, for taking such wonderful care of this beautiful little girl. It's hard to believe she's so young. Do you think she will ever be adoptable?