Andy in his wagon.   The only other Peke I know who had a wagon was my Starlight. 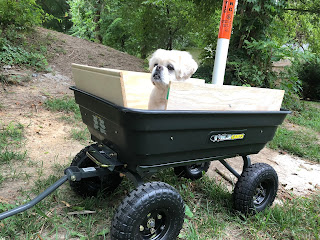 Andy came into rescue with his mom, Minnie, and his granddad, Koko.  Of the family, he was the most traumatized.   He needed special care. 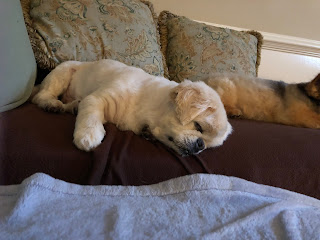 Jamie and Kim were up to the task.  They had adopted Harrison from us and he was a needy one, too.   Jamie and Kim have so much patience, and Jamie wanted to help another one who needed a "Peke whisperer" on his team.   They offered to foster Andy. 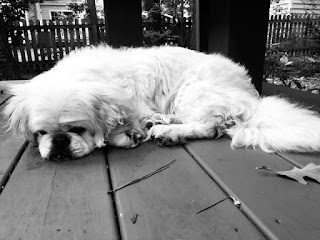 Kim wrote this: "Well, that only took two weeks. Jamie called it this morning: Andy is our dog now. While there were some potential adopters for Andy, Jamie felt that his special needs meant he should stay with us permanently. He’s completely deaf, and probably blind in one eye. He exhibited pretty significant separation anxiety when we got him, but has settled in nicely and is sleeping through the night. Andy took the news of his official adoption in a very chill way - by sleeping through it on this rainy Saturday. My husband is a Peke whisperer and I admire his patience and compassion for these special dogs." 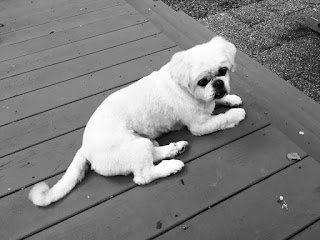 Andy now has a lifetime of safety, caring, love and security. 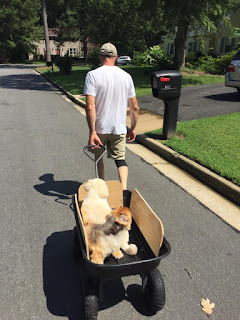 His new dad calls him Mr. Rooney-- after Andy Rooney.   He said it did his heart good to help Andy and give him a good home.  It does my heart good, too!!   Harrison has been great with his new brother.   Harrison did let Andy know who was in charge, and Andy didn't care.  He isn't a take-charge kind of Peke.   I'm SO happy for Andy/Mr. Rooney.   He deserves this so much.   Thank you Kim and Jamie!  And Harrison!  💙
⭐
Posted by Linda at 12:30 AM

I guess he is now Whispering right back at you Jamie :)

*Love the photo in the wagon and yes Linda ..... I thought of Starlight too.

I think this presents a good example of the bond between a dog and their person/s. For my wife and myself we have a Peke-a-Pug who is blind, deaf, has cognitive issues and just underwent cancer surgery (thank god for pet insurance on our pack of five small ones). I've had people ask me why we don't put "Cleo" down. My answer always is all long as she has quality of life, isn't in pain and the vet confirms that she has good quality of life (also confirmed by Cleo via kisses and tail wags), she stays in our house.

It’s a tough call on when it’s the right time to say goodbye. That’s why it so important to connect with your pet. You have to reads their signs. They will let you know. By putting yourself aside for awhile and getting on their level. Puts you in a better position to make the right decision. We sure do love our babies, they bring us so much joy