UPDATE ON PRINCE and GINGER KENT 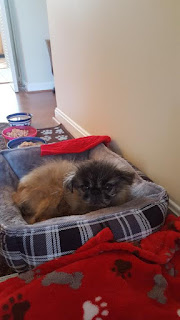 You remember that Prince came to us in horrific condition.   He is being given the best care with his foster mom, Kim, and the vets.   He has a  lot of worms, and his mouth is in terrible condition.   (Floyd came to us last year and his mouth was the worst we had seen.   His teeth were so infected that it caused heart issues that he still takes meds for.   So, getting the mouth healthy is very critical.)   After seeing the vet again yesterday, he is now in the vet hospital getting 24 hour care, so that he can get meds for his eyes every 2-3 hours around the clock.   He received medication to get rid of the worms (sometimes, panacur is not enough, we use Drontal for more in depth "kill"). 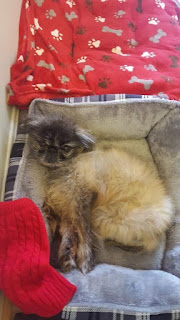 He has an e-collar on so he won't scratch or rub his eyes.   He has eaten some turkey that his foster mom took there and he decided chicken is good, too!   He is getting a lot of extra snuggles at the vet because he is just so sweet.   Ida, one of our great volunteers, is visiting him today, so I'll have an update later that I can add to the end of this blog. 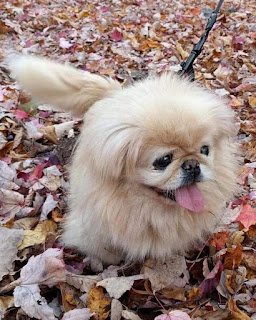 Ginger, this beautiful little girl, came to us with eye issues.  We thought she was doing better, but she saw the ophthalmologist yesterday.   Her eye is leaking fluid and the ulcer has become larger, so she needs surgery, which is being done today.    She should not lose her eye because she is having this surgery.   She will also have canthoplasty to help her eyes become more stable.  She has been getting eye drops since she came into rescue and is no longer bumping into things, so her sight is much better. 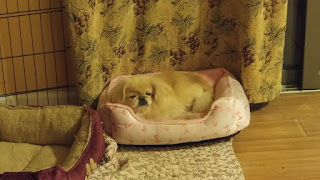 I'm so glad Ginger Kent came to our rescue group so she could get the care she needs.   She did great on the ride to the vet, and is a sweetheart when she is being examined.   On a side note, Ginger Kent is in the same foster home as Oreo.   She tries to keep him in line when he runs around "like a fool" as his foster mom says.  Jackie, her foster mom, says it's so cute to watch her tell Oreo to "settle down!"   Love that!

I'll update this blog later today with an update on them both!
+++++++
Here is the update!   Ginger Kent has her eye surgery today-- it was done this afternoon and so she is still drowsy. She will go back in two weeks for her follow up. She still needs to be spayed, have a hernia repair and a dental, but those had to be put on hold to save her eye. She is such a sweet girl!!   Ginger is home and doing ok, but hates her cone of shame that she has to wear for the next 2 weeks. She ate a great dinner and is back to keeping everyone in order. She let Oreo know that her blanket is off limits for him to chew on. 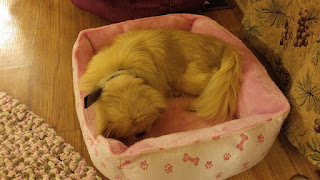 Prince is at the vet being cared for. He was given some appetite stimulant and he is eating and drinking more. His eyes are getting special drops to help them heal. His spirits are better and he is engaged and becoming playful! Thank you to everyone who is praying for him and donating to his care.

Prayers for Prince and Ginger Kent! Just getting rid of all those worms will do Prince a world of good.Glad he is eating now.

Prayers and blessings to you and the fosters for giving these babies the love and attention they needed to start a new and much better life.