ONE DAY TIL THE PICNIC! 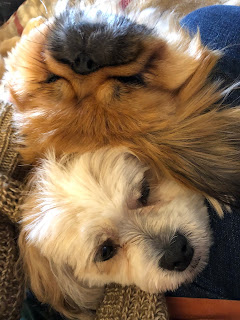 Piper and Paddington came to me just over two months ago.   They were so bonded that we took Piper in also, even though he wasn't a Pekingese. 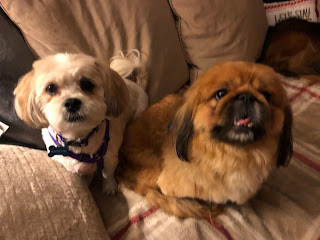 They both needed eye surgery-- Piper for a small tumor on his eye lid and Paddington to fix those huge nasal folds under his eyes. 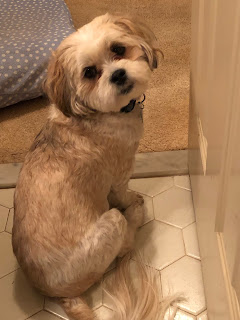 I haven't ever had a Malti-Poo, so Piper has been new for me.  But, sweet!  Oh, so sweet.  His hair has grown out some and I like it a bit longer. 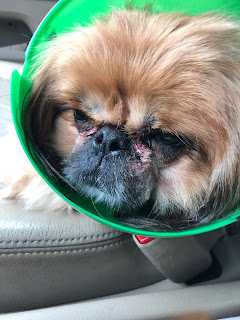 Paddington had eye fold surgery and now his eyes are great.  No more tears constantly on his face from the irritation. 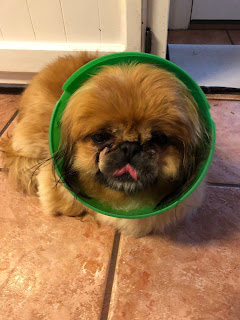 He didn't think much of the various e-collars I put on his face.  And he never barked!  NEVER.  Did he know how to bark?   We didn't know. 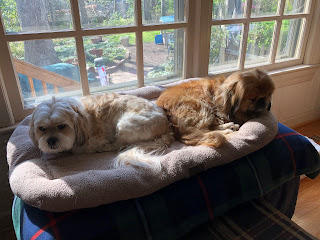 They are both doing great.  They are house trained now, for the most part (Oh, yea, I love house training dogs-- NOT).   And last night, while having play time on the bed... Paddington barked!  A real bark!  WOW.   They are both coming to the picnic, so you can meet them.  They will get to see their Bits-- four of them will be there.  Their first Peke picnic.   We are so excited and getting all the things in the car today.  I'll have extra x-pens if someone needs to borrow one.   Petey was coming, but he won't be able to since he had a dental and is on some strong meds right now.   So, he will rest at my house.  But, lots of Pekes will be there and we plan on having so much fun!!  SEE YOU THERE!
Posted by Linda at 7:40 AM

Yet again I'm going to miss going to the Peke Picnic. We made grand plans with the Pekes coming with us and we were going to find a hotel that welcomed our Fur Kids to spend Friday night then go to the picnic and spend another night at the hotel before driving back home on Sunday.

That's out of the question now but there's always next year (I hope) that we can actually carry out those plans.

So this year I'll be watching for tons of photos to see what fun I've missed in 2019.

It will be the best picnic and how I wish I was there to see the Bits and Peke's and you all from Must Love Peke's .

I do hope you will get some adoptions Linda .... I will be doing my Dance but wish I could do it right there at the picnic tomorrow!

Put a Shrimp on the Barbie for me and Yum Yum :)