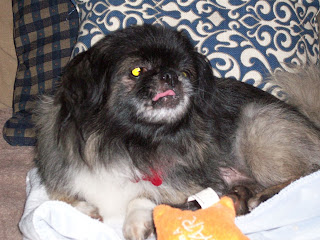 Cami Bear has been with me for a few weeks and he still wants chicken nuggets-- but I'm getting away with mixing in good dog food, grinding it all up and he loves it.    He'll slowly get off the bad stuff.  I tried going cold turkey to good stuff, but then I realized he must have been fed junk food all his life.    He was going to win. 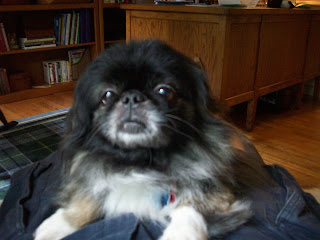 So, the sneaky approach is working-- mixing it up in my mini-grinder.     He has put on a little weight (he lost some during his hunger strike).  Of course, he also had kennel cough-- I was syringe feeding him to make sure he was getting fluids.    His coat is getting softer and he's a sweet boy-- all 10.5 pounds of him. 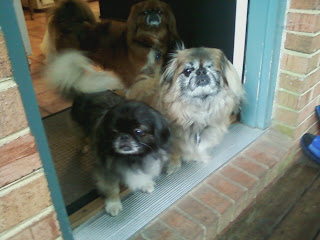 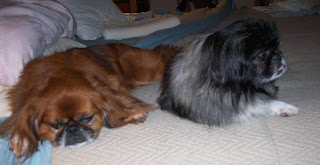 Kai Kai and Cami sleep on the bed-- Max has decided he should be up there also.    Kai was there first, and Cami hopped up on the ottoman to the bed and went to curl up beside Kai Kai. 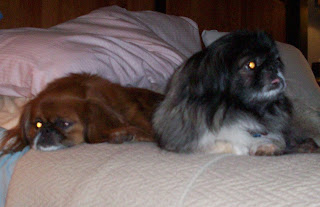 I didn't tell him he is being neutered today.     It's going to be a big surprise-- he probably won't be happy with me tonight!    Once he's better, he's going to his new home.  His future  mom is so excited!!
Posted by Linda at 1:00 AM

For goodness sake Linda - keep Cami away from the drive-through at McDonalds!!!!!! LOL

What an adorable little man Cami Bear is... you did the right thing by changing his diet gradually - that's always best. I'm glad they're all getting along and that Cami is getting a forever home. I'm praying for a successful surgery and know he'll be just fine :-) Thanks for helping! We need more people like you in the world!