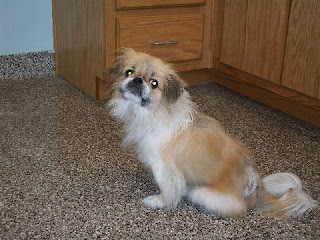 Wylie came into rescue in September of 2009.   He was in rough shape, but he had such a sweet personality. 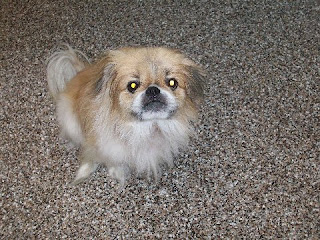 I had him a short time when I went to do a home check at Beth and David's.  I took Wylie along with me just to see how he would do.   He really wasn't ready for adoption, since he was completely healthy yet.   But, when he got there, he rolled over for a tummy rub and sealed the deal!   He decided this was the place to be and he let them know it. 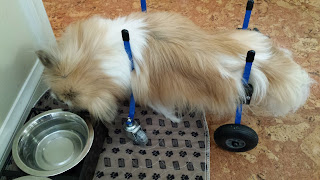 He was a small boy, under 12 pounds.    This year, he had a stroke, and his parents ordered a wheelchair for him.   Wylie really liked it. 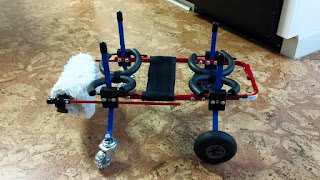 They ordered it for him after her had a series of small strokes that left him blind and with front leg weakness and balance problems.   Wylie liked how it supported him and didn't want to be taken out of it.   They got this custom made wheelchair from a company in Washington state: K9carts.com. 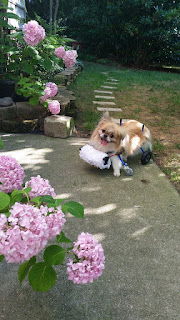 Unfortunately, Wylie only used it a short time.    He died in his sleep on Thursday.   It is so heartbreaking for his parents and Peke siblings.   He was such a sweet boy and he will be missed greatly.   You can run free now, Wylie-- You have been loved, little one.
Posted by Linda at 8:48 AM

What a joy you brought to Wylie's life by taking him visiting and loving parents adopted and cared for him. Love these stories..the stories you tell about each and every Peke erases the headlines and tragedies we are subjected to in every waking minute these days.

Oh Linda .... what wonderful owners of Wylie ... to find a wheelchair for him!

I am so sorry for their loss of Wylie but he had the most loving of homes :)