JANEY AND HER NEW FAMILY 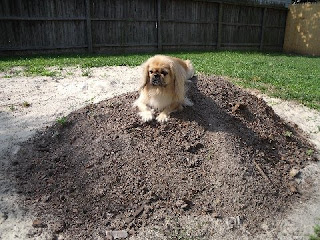 Janey was in foster care and had so much fun at her foster home. She liked to be "king of the hill"-- or should I say "queen of the mound." 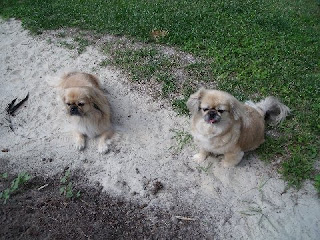 She and CoCo were good friends. I wonder if CoCo misses her? 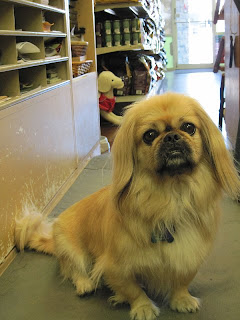 Janey was adopted and her new mom owns pet food/nutrition stores. You can see her web site at: http://doggonenatural.com/ So, you know Janey is going to have GREAT food and care! 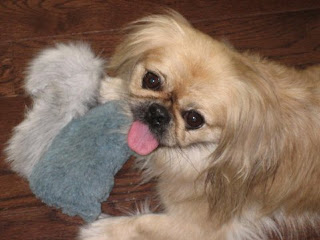 I think she has acquired some new toys that she picked out herself on one of her outings to the store. Look at that face-- she is so happy!! 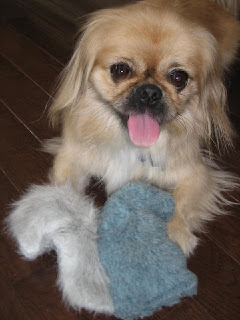 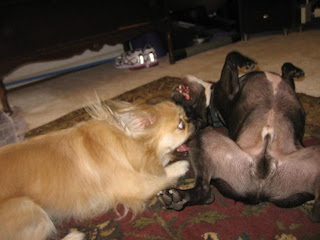 Her new best friend is Lyon, the French Bulldog. Janey looks vicious! But, they are just playing. Honest! 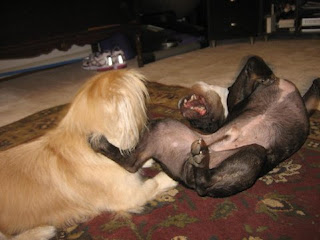 Her new mom says they are REALLY playing a lot now. Lyon looks very happy and they even started to chase the poodle around together in play. (maybe they think as a pair they will be more successful in tagging him!). 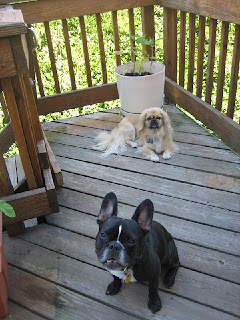 Here's a better look at them. "I know she's behind me," says Lyon. 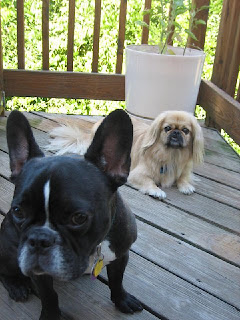 Craig and I are so happy to see this! Janey is going to such a nice family!

What a pretty girl Janey is! It's obvious she's enjoying her new friends and toys immensely.
That holistic pet store is right up my alley. I've seen firsthand what a HUGE difference quality nutrition can make in a dog. I'm still learning about all the horrifying garbage they put in other petfoods, like cancerous tumors from beef and chicken.
As I've mentioned before, Linda, you made me aware of the Nutro recall about a year ago, which made me search for a holistic formula. To ensure your petfood is made with human-grade ingredients it should be APHIS EU certified, which means it qualifies to be sold in Europe where the standards are much higher than in the US.
I also learned that socalled "senior diets" which are often recommended for overweight older dogs have greatly reduced protein so your dog ends up losing muscle and becoming flabby, not to mention they are always hungry because they need protein not carbs.
Thank-you to Janey's owners for educating pet-parents and for offering only healthy pet food!

I will have to ask Janey's mom to contribute to the blog!! :-) We could all learn from her!
Linda

That's a great idea, Linda! I wish I lived closer so I could actually visit the store and meet them! Of course I'd want to meet you and your pekes too! Maybe someday!?

I wish I lived closer so I could visit the store and meet you all! LOL