Remember Maximus? He came into rescue and after I picked him up, he got to go to the farm with me. I took advantage of being in Richmond, and just continued on a little further. I could tell right away that Maximus loved toys. 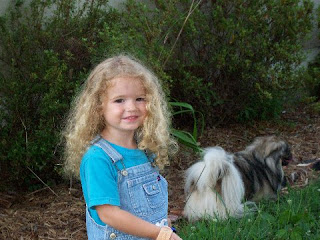 He did great with my grandchildren, too. This is "Bitty Bit" walking him. Remember that my grandchildren have been around small and large dogs all their lives and have gentle hearts toward my rescue dogs. They know not to tease them or roughhouse with them. When I go to the farm, I have helpers! They love to help walk my fosters. (And my own dogs, like Starlight!) 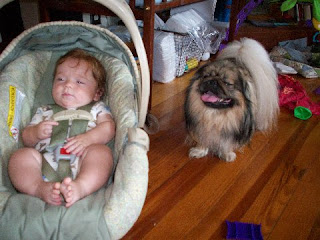 The baby, "Drill Bit" couldn't fuss with Maximus at all--he was stuck in the seat. Maximus was curious about him. But, he was not a bit aggressive with the baby. 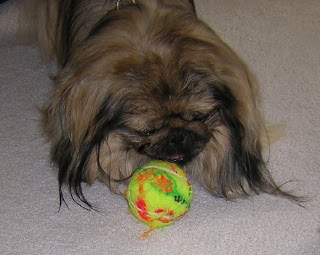 Maximus had his eye and nose surgery and is doing great. He had those big eye folds and his nose was pinched, but now that's all fixed. He is on a special diet (which three in my house are on for bladder health) and loves it! He doesn't have accidents any more now that his infection has been cleared up. 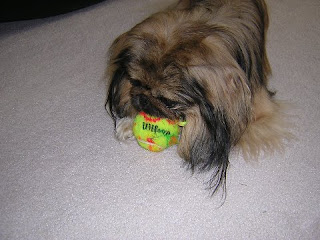 If Maximus has to go outside, he will bark to let you know. He also is very people-oriented and does not like to be left alone. He needs another dog friend, too. He is not a loner. He does like children (obviously since he loved my grandkids) so a family with kids who know how to treat dogs would be fine. 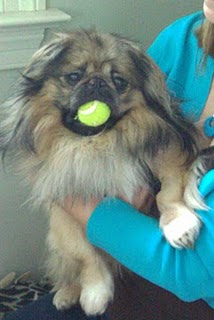 He's too cute! He even catches the ball like Shami--with his front feet! They would have a "ball" playing together!

I could really use a smart dog like Maximus to teach my three poms to bark when they need to go out ~ they only bark when they want to come in for a treat. He is even more beautiful now after his surgeries.