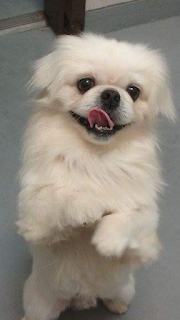 Digger came into rescue in April with two Pekes we think are his parents.   He immediately charmed us when he sat up and smiled. 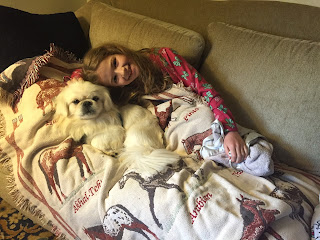 My daughter's two Pekes, Wicket and Lottie, passed away several years ago and she really missed having a Peke.   I raised my girls with Pekingese so Pekes are just part of our make-up.    Here he is with Bitty Bit, my granddaughter. 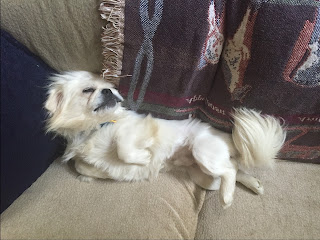 Digger went to my daughter's to be fostered. 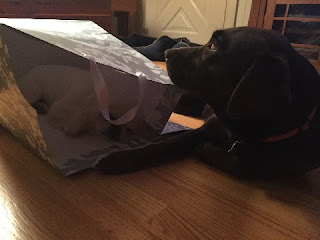 That means, when Camp Runamuck is in session, Digger is here.  His side-kick, Gigi, is watching him as he naps in a gift bag that he crawled into.  These two are SUCH good friends.  OH, and do they play! 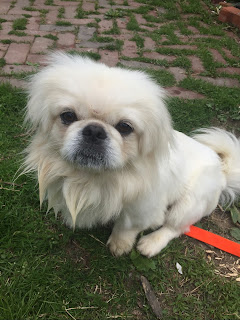 Digger is a little escape artist, so special additions had to be made to the fence.  Mesh was added to the wooden fence.  He is a little inventor of ways to get out-- he just wants to go visit the horses, but he can't get out now! 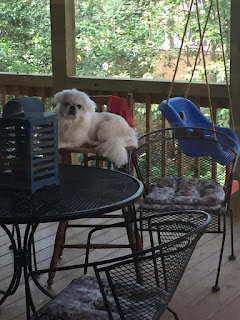 He likes to help clean up-- what a good boy.   Yes, I am sure there was something on that high chair when Digger came to my house.  Tidbits left over by Sugar Bit. 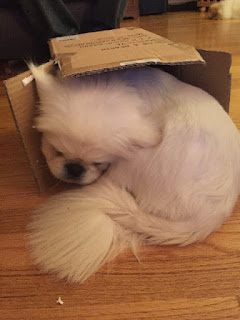 He likes to get in things-- he likes his open crate in the laundry room-- where he stays if my daughter is doing errands.   (At night, he gets to decide who he wants to sleep with.)   He also likes tiny boxes.  I don't think it fits, Digger! 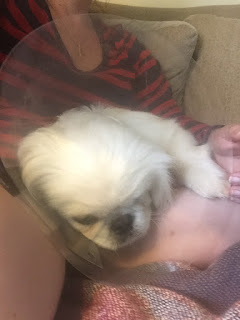 He had a reaction after his neuter and had to have additional treatment-- which also meant the cone went on again.  Poor baby. 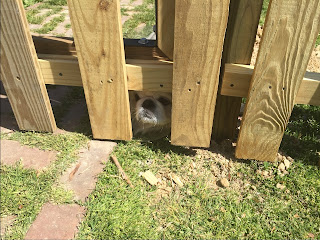 Before the mesh went up, he tried to look for escape routes in the fence.  The e-collar got in his way! 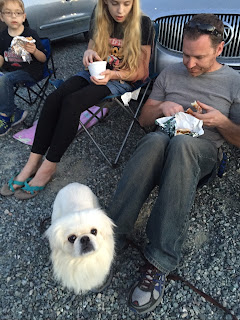 Digger even got to go to the drive-in.   My daughter lives in an area where it's still very family oriented, and people come the the drive-in and bring their dogs and watch commercials from the 50s before the movie begins.    Digger was a hit! 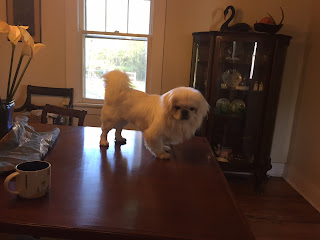 He likes to climb-- did I mention that? 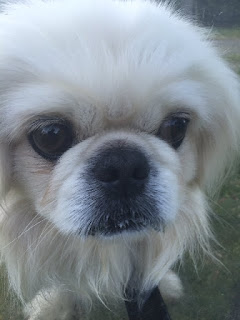 My daughter's family feels like  Digger has filled a place in their hearts that was left open when Wicket and Lottie died.    A Digger-sized place-- so Digger isn't going anywhere.   As soon as he's all healed, he will be adopted.  Of course, that means you will continue to hear about him since he'll be part of the family!   I love that!
Posted by Linda at 12:30 AM

I had a feeling Digger would be hanging around ! LOL

Oh he is sweet.

*Coco is doing good but ..... she has turned into a Princess and must be hand feed if she has to have that rotten "cone of silence" on!!! The eye is looking good I think ... see Vet this Saturday.

Hooray for Digger!! And healing wishes for Miss Coco…… :)