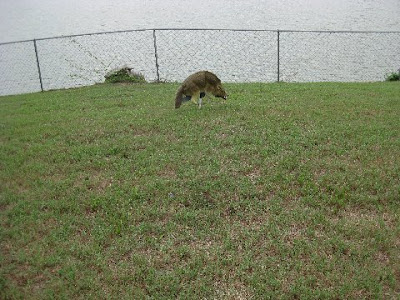 Look at this scary thing on Gracie's yard! 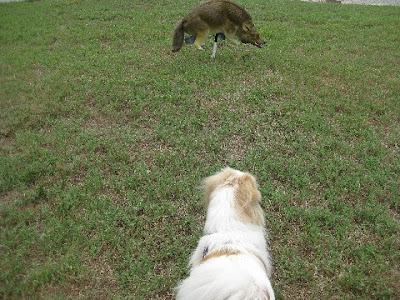 Gracie is off to check it out. She's brave! She's not afraid of that coyote! 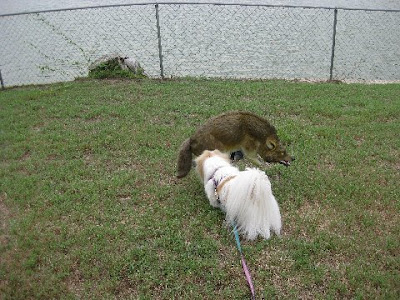 Let's see what makes this thing work. Boy, he looks fierce. They are made of some sort of rubberized material and the tail is of nylon that looks real. They are mounted on a stick that goes in the ground. When the wind blows, they move and the tail moves too. From a distance they look as if they are crouched ready to pounce. 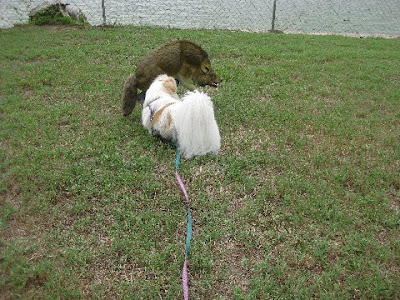 Several of Gracie's neighbors puchase the plastic coyotes to discourage the geese from their yards. Naturally Gracie had to see what was in her yard. Gracie's mom thought she might be afraid, but no, she just checked him out and then joined him in looking for the geese. She sniffed him, walked around him, and then sat down as is to say, "I will help you scare those geese away." 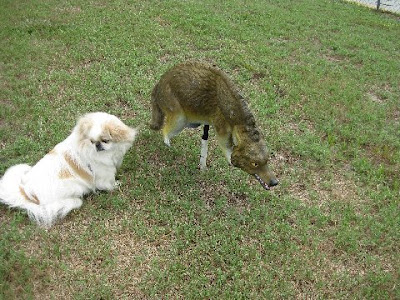 And these things WORK!! Since they have had them up they have not been in any yard that has a coyote. They come on the lake periodically but stay in the middle of the lake or go to the other side where some of the folks didn't get a coyote. There approximately 200 in the surrounding area and they can destroy a yard in no time flat and they spread diseases. They are federally protected so there are few alternatives and they are not afraid of people--- but they don't come near the coyotes. Gracie's mom said, "Geese have the reputation for being stupid. I hope that is true and that they don't realize the coyote is not real."

Gracie never ceases to amaze her mom. She is now known as the "Geese Exterminator!"
Posted by Linda at 6:00 AM

Gracie is one tough chick! LOL

Gracie didn't even bark once, did she?
I have never heard of the fake coyotes~ They sure do look real. Something to keep in mind if the goose population increases around here. People who live in the country have more of a problem with turkeys around here, Hmmmm...