I want to add two warnings on this blog-- one is for "bugs" and one is for a medication. The medication is Confortis. It is a new flea medication, a once a month treatment. Two dogs I know of have almost died after using it. The side effects can be VERY serious, even lethal. Chancey, our adopted foster dog, almost died this week. Please be very careful if you use this medication on your dogs. I won't use it. (I now have four cases in Pekes reporting back to me that have used this med.)
Holistic veterinarian, Dr. Blake, on Comfortis
++++++++++++++++++++++++++++++++++++++++++
I received this from a rescue friend. I had one of my dogs have an allergic reaction to something-- his face/snout began to sweel up severely. This can happen because of a bee sting or a reaction to a rabies shot. This is VERY serious. 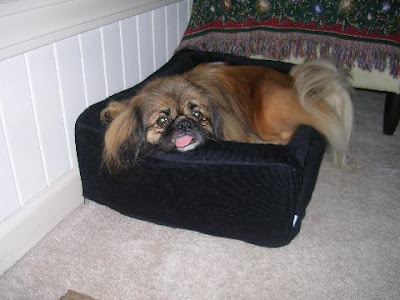 This is my Scooterbug-- he had his face swell up so badly, and it really scared me. I didn't take a chance and rushed him to the vet. He got a shot there and I waited there to make sure he was okay and didn't need more medical attention. He is my sweet, sweet boy-- a therapy dog to all the fosters who come here. He is silly-- as you can see in the picture-- and such a great dog.

I keep diphenhydramine (generic Benadryl) 25 mg tablets (not capsules) at home for use in an emergency ALL THE TIME. You still want to go to the vet to make sure there is not an allergic reaction that cuts off their air supply. 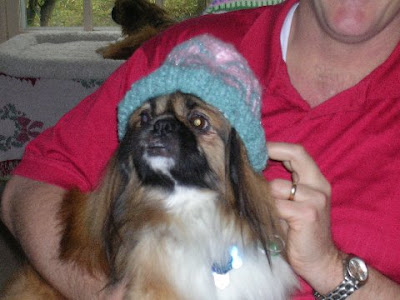 This is what I received and it's a serious warning about the dangers of bee or yellow jacket stings. It can also happen from a spider bite.
"About two weeks ago, the dogs went out at night, and our nine-year-old female pug, Rocky ("Rockefeller"--she thinks she is one!) went into the onecorner of the fenced-in yard to "do her business." All of a sudden, shebolted back to the deck like a bat out of the bowels of Hell, and pacedaround the deck in a very bad mood. This is a dog who fears nothing, and obviously something was wrong. We checked her for animal bites, and I went back out and didn't see any wild animals.The next morning, she suddenly woke up, acted as though she needed out, and then proceeded to faint--her legs went out, she fell on her side, and shepuked/peed/pooped all at once. After about ten seconds, she was back to being herself (but upset about the incident--unlike a seizure, she neverreally went into an unconscious state). I watched her all day, and everything seemed okay until later in theafternoon. She walked upstairs, and all of a sudden, another incident happened. I grabbed her, and rushed to the vet five minutes down the road. Three hours and over $400 later, nothing could be found to be wrong with her. The vets were puzzled, and suggested that if anything else happened,we should rush her to Dogs and Cats up in Bowie (which is basically $1,000 just to pass through the door). Luckily, I stayed home with her for the next two days (we never left her alone), and nothing happened. Fast forward three days.... We are all in the backyard, and what do I find out where she was, but a nest of (what appears to be) Yellow Jackets in the ground! It now appears that she was stung by a Yellow Jacket, which caused her to rush back to the house. Meanwhile, she started having allergic reactions to the sting, which caused the fainting spells the next day. If we had known,we could have saved several hundred dollars, and the vet could have solved the problem with a simple Benadryl tablet. So if your dog shows the same symptoms, be sure to ask your vet to check tomake sure your dog isn't having an allergic reaction to a bite. "
Posted by Linda at 6:00 AM

Firstly , thankyou for the warning on Confortis. I do not think its available here and if it does come - I will give it a huge miss. I must say - I like Sentinal very much for my dogs. Many years ago I used Advantage on my old peke Lulu and she got a skin reaction - so I went to the tablet Sentinal and it was fine. So I stick to what I like.
Kenzo is a pest and loves to sniff up bees - we think he got stung when he was younger. He did not get a bad reaction luckly. We do have wasps and as yet the little pest has kept away from them . I cannot see Moi Moi going for bees or wasps - not her . LOL
Luckly we do not have rabies here in Australia. We have very strict quarantine laws for importing animals and if you bring one into Australia they go out to quarantine for some months - very expensive too. My groomer had to pay for her 4 dogs when she migrated from Hong Kong to Aust. That is one reason many dog breeders do not import enough - the $$$ - sadly , for it improves the gene pool .

That is so scary! Poor Chancey! Do you know what caused Scooterbug's face to swell up? I've learned it's VERY important to keep a close eye on our pets after any shots or new meds. Our Sisqo had an anaphylactic reaction after his first immunizations, purple lips and major swelling. I had let him crawl under a chair and wasn't paying any attention because I thought he needed to rest. Luckily my daughter came home and checked on him and noticed. We rushed him right back to the vet. Also our oldest, Mocha, is still recovering from a bad reaction to his shots a month ago. He developed a huge, deep abscess at the injection site and had to take two rounds of antibiotics. I was not aware that he had an infection because he was acting better after two days of being lethargic. The area was bruised and a scab was developing, so I thought this was normal healing, but again my daughter said it didn't look or feel right and that he needed to go to the vet. We are very lucky the infection didn't go into his blood. I really think veterinarians need to make us more aware of these possibilities.

Poor scooterbug, i bet that was scary! I hope he is feeling back to himself, bless his sweet little heart!!!!! Take care

Scoter is fine. I was stung four times a few weeks ago by ground yellow jackets and was VERY careful when I got near the next-- even though my husband treated it twice. I was okay, but I was sure watching!
Linda

My vet has everyone sign a paper with possible shot reactions on it. Scooter reacted years ago to the rabies vaccination, so now he has the one that does NOT have the lepto in it. Just can't be too careful with them.
Linda

Ouch! Stung four times at once, my goodness they are vicious!!
Sounds like your vet is more responsible by having a form to read about possible reactions. I shudder to think what could have happened if Mocha hadn't been shaved and still had his long thick coat to cover up the area. Sisqo just gets a "Dex" shot along with his immunizations - I think it's what they give them when they have a reaction to get rid of swelling. A steroid maybe?

I haven't heard of a "Dex" shot-- can you find out what that is? I wonder if it's some kind of antihystamine.
Linda