Oliver in the Spring

Oliver was adopted last fall and loves his new home. He has two Peke sisters. Here is Snuggles-- she loves to get the milk jug and take the cap off and lick the remaining drops of milk. There must be a little bit left and she's doing to find it. She also likes to take the paper off smaller jugs and bottles. She makes a mess at times, but at least she doesn't eat any of them. 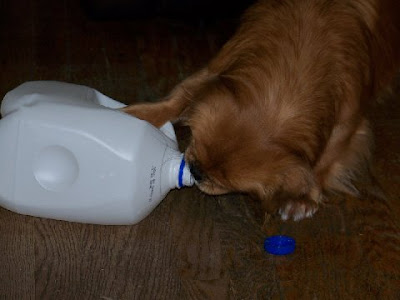 Cuddles and Snuggles are such happy girls! Look at that smile on Snuggles' face! They know someone has a treat!! 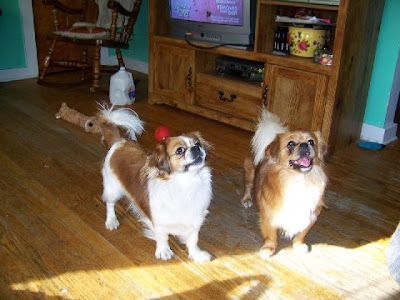 Snuggles and Oliver are on the couch. Can you see Snuggles little tongue sticking out. I love that about Pekes-- sometimes their tongues just will NOT fit in their mouths! 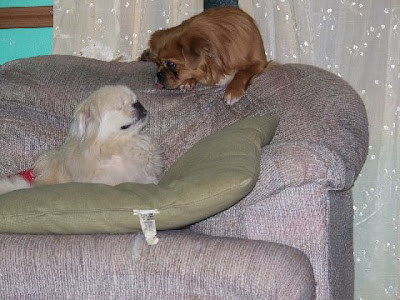 Oliver was returning from a walk, just prancing right up to the steps. 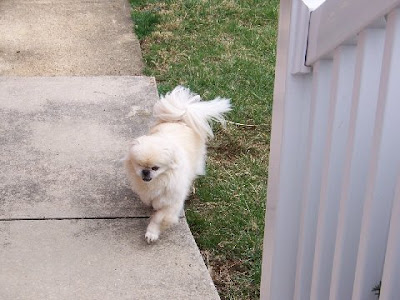 Wait, there's something to sniff before he goes in. Have to stop a minute. 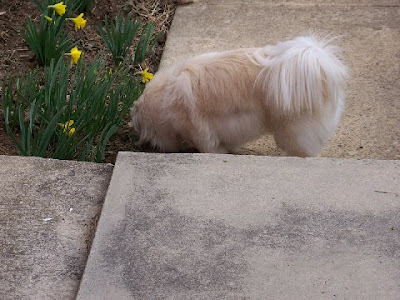 Here's Oliver after going to the groomers. He was so uncomfortable and hot, but now he is not panting as much. Some Pekes just can't cool down enough with all that hair. His sisters were groomed, too. Their owner said they look like monkeys. But, they are loved! 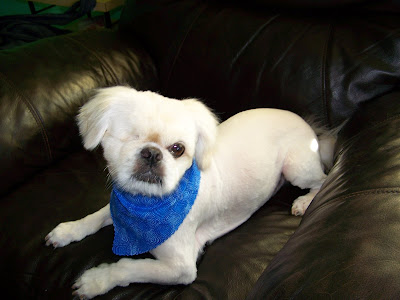 I love the summer "doos"! My two boys were hot for the peke fun day-I wanted to leave them long so everyone could see how beautiful their coats are. But as soon as I got them home, off came the hair and now they're happy, running and chasing each other again! They're really happier now that they're cooler!!

I am glad to see Oliver is happy and loved :) I can't bring myself to have Lulu groomed, she's such a princess with her flowing hair.

I remember the horror a old lady who was showing a Peke at a dog shower had on her face when I told her I had mine clipped for summer many years ago now.
"Oh , you should NEVER do that- ruins the coat!!!!"
Well, we had Lulu clipped and it was kinder in our hot summers and the coat did not change either!
The dogs feel so much better with a clip in the hot weather.