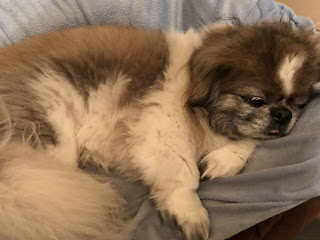 As we were busy getting ready for today, the dogs were perfectly content to watch us... Chumley was napping. 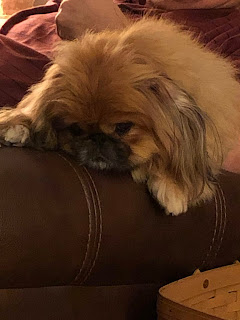 Paddington was totally uninterested in helping.   He doesn't look bad does he?  LOL 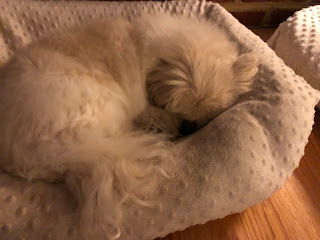 Little Minnie was snug in her bed.   She is over 14 now and her age is beginning to show.  But, she's happy to just curl up and nap. 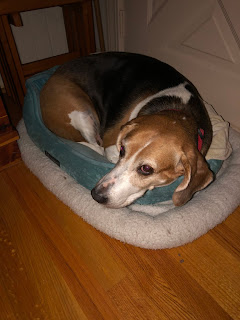 Callie Hound continues to try to fit in the Peke beds.   I don't have a large bed-- why get one when she would rather have the Peke ones.  And the couch, too. 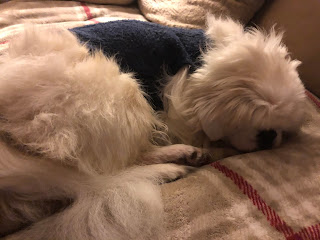 Stewart gained 4 ounces.  It's not much, but I'll take it.  I give him large portions, but he is at least going up, not down.   He will have ear surgery on Tuesday to remove a growth in his ear.  I hope it will help him to hear. 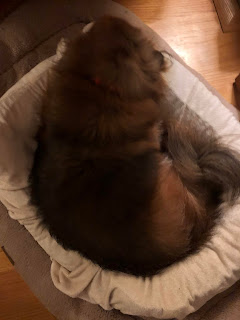 Kai Kai loves his bed-- this was Max's favorite spot and Kai Kai has taken it over.  It must smell like his friend. 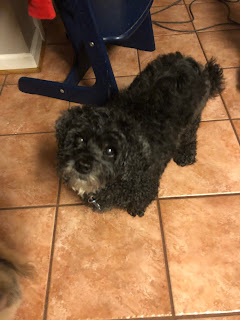 Barty was over, too.  My daughter's dogs sometimes hang out here (Callie is hers, too) and they love the company.  Barty was rescued several months ago, and was saved.  He was in rough shape with no people who wanted him.  But, my daughter did.   He is very sweet and was even playing some, too.  He's an old man.  He fits right in. 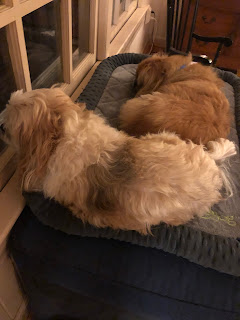 Piper and Paddington were patiently waiting for Thanksgiving to arrive-- don't worry, they won't get any turkey.  It's not good for them, even if they think it is. 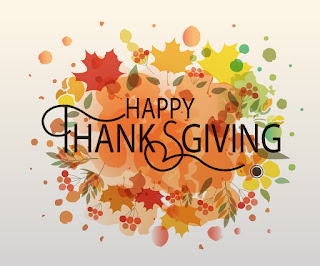 I hope all of you have a wonderful Thanksgiving-- it's a day where we have so much to be thankful for.   🍁
Posted by Linda at 12:30 AM

I hope all who visit Must Love Peke's had a lovely Thanksgiving.
Oh .... I just love turkey!

What a beautiful household. Happy Thanksgiving to you and your family.