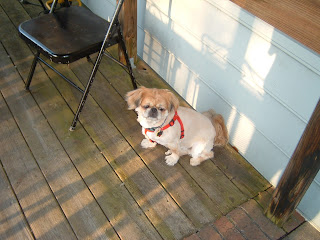 It's been a year since Ginny Lee joined her wonderful family!    They sent me pictures of her.  She's adorable.   Here's what they wrote:    It's been almost a year now since we adopted Ginny Lee and I thought you guys would like an update and reflection of the past year. She's so sweet and we are so thrilled with her. When looking for a new family member, we'd seen Ginny Lee's picture and description. Although Ginny Lee had a reputation as sweet to people but not to other dogs, she was perfect for us. We'd had experience with our last beloved rescue having "only dog issues" and it just wasn't an "issue" for us. 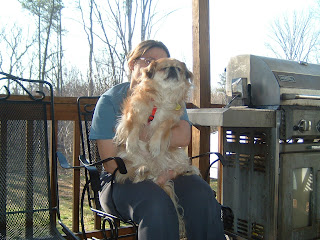 The day we first got her was hot. We were so excited to see her. She was adorable and Kim was so nice. The drive home was quite long (traffic) and I understand Kim's drive was pretty congested also. It may sound silly, but the traffic didn't bother us a bit because Ginny Lee was in the back seat between the kids with her (still) favorite Christmas puppy toy playing almost the whole way home. The kids giggled and Ginny Lee playfully growled, snorted and yipped. It was fun.

That evening we had a HUGE thunder storm and I feel so bad for Ginny, because we learned she does NOT love thunder. I''ve noticed dogs will often pick a person out of the family to be the "one" they go to for help and safety and Ginny picked my husband that night. She crawled up under his chair while he played guitar and shook. He petted and spoke to her soft and she's hooked now. Needless to say, now every storm my husband has a friend under his chair or in his lap although my daughter thinks it's too cute to pass up and will hold her in her lap and stroke her back. 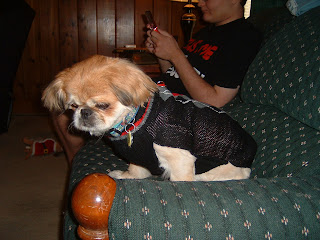 Some cute Ginny Lee facts:
Still doesn't like other dogs (or cats, squirrel or deer - because they are all "probably" funny looking dogs), Still afraid of thunder - because sounds like that have GOT to be bad, rain is not so good either.

Loves: being held like a baby, tummy rubbed, held in arms, brushed, cuddling or wallowing on beds or couches, playing with toys, playing under the covers monster, snow, sleeping with someone in bed as long as she has most of the bed, snoring, steamed carrots, apples, sniffing flowers and especially cedar trees (must smell REALLY good), barking at the neighbors cats and the other neighbors dogs, digging "wolf" beds in the carpet, barking at delivery men, pretty much any kind of love from her family. 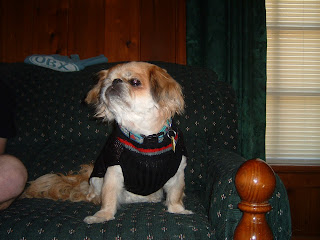 Ginny Lee is really smart too, but can be stubborn. My daughter has taught her to sit on command, but she will only do it for my daughter and only if the treat is worth her time. I may try to get a video of it, because it's so cute how fast her rump can hit the floor for a special treat. 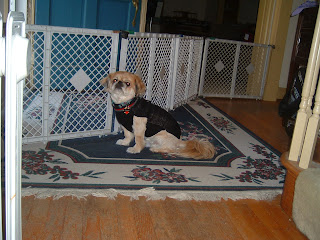 Thank you for the update-- we love to hear about our adopted Pekes!!

I do believe Miss Ginny Lee would love your hubby to get out his guitar and play "Dreams" by Fleetwood Mac when those storms are about!
As the song says -
"thunder only happens when its raining,
Players only love you when they're playing"
So happy to read Miss Lee is having a wonderful life with a loving family now!!!

Woof, Woof - from the Peke's in Australia - Moi Moi and Coco