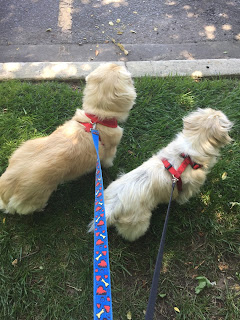 Rocky and Furby are son and father.   Baby Girl came in with them, but we had to put them all in separate foster homes.    I kept Furby with me because we thought he was in the worse shape and I just wanted to take care of him.   (It turned out that Baby Girl had significant health issues also.) 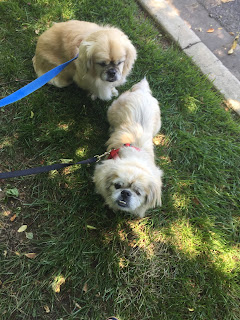 Furby has improved so much, and I talked to Rocky's foster mom to see if Furby could come there to be with his son.   They loved each other so much and would roll around and play when I first got them into rescue.  Rocky is a lot bigger than his dad, but they weighed almost the same when they came into rescue.   With activity, and a special food for allergies (and no junk food), Furby has lost almost four pounds!   He is at a good weight now and it really helps his back legs.   He could barely move when he came into rescue, and now he's all over the place! 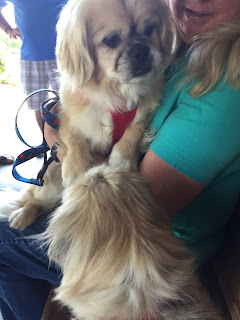 We met in Richmond yesterday to let them see each other, and to let Furby go home with Rocky. 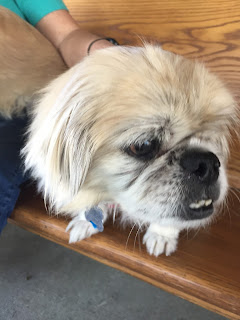 Those two have been together for over 8 years-- and they acted like neither one was there!  We were stunned.   They hardly looked at each other! 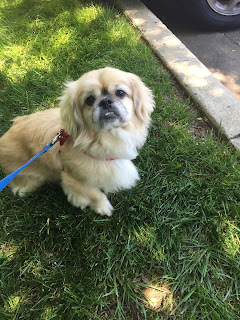 I think they will remember each other in a short time.  And I hope they will play together.  If Furby is not happy, I will bring him back here.  But, the idea of having father/son together again was a happy one-- I hope it turns out and we can find them a home together!
Posted by Linda at 12:30 AM

Oh boy ..... I would be stunned too!
Lets hope they start to remember each other.