In Memory of Boscoe P.Coltrain 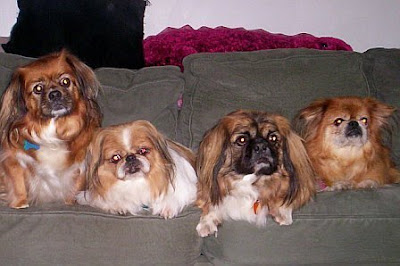 Boscoe P. Coltrain, second from right, was adopted by Toni five years ago. He would have been six years old in February. He was a special needs dog, who had no back hip joints and it made it "impossible" for him to walk. He was found in a taped-shut box in the woods and turned over to our rescue. He learned to walk by strengthening his back leg muscles and did well for most of his life. He is with his buddies: Marco, Mugs, and Clifford (who died December 12, 2008). 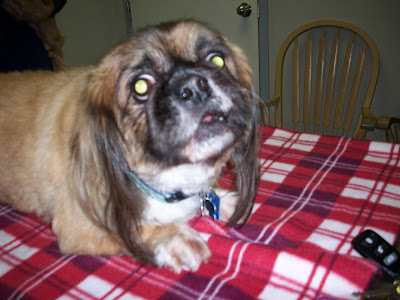 I was contacted by Boscoe's owner to tell me he was in pain, and was paralyzed from the front legs down. We met at the vet and things didn't look good for Boscoe. I had my camera with me, so was able to get some pictures of this sweet boy-- I'm so glad we have them. 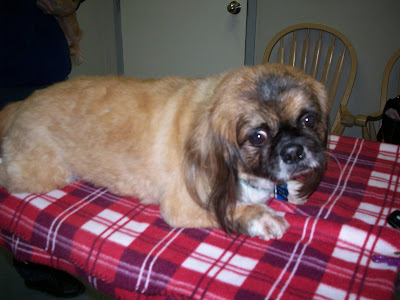 Boscoe was greatly loved by his mom, Toni. It's always hard to decide when to let them go. But, there was nothing that could help Boscoe, and he was in pain. That pain was the deciding factor.

Toni wrote me this: "Dr. Evans (http://www.acredaleanimalhospital.com/) took the time to stop, look, listen and advise. It makes a big difference when you can make an "informed decision." Yes, it was very sad! And I miss him but I know it was best for him and that is what is important. If I had not adopted Boscoe, I would never have met you or any of the other great people associated with PVPC. Also, I would never have had the opportunity to foster and I wouldn't have been able to make such a difference for Marco....Boscoe had a job and he did it!" Boscoe sure did have a job and he did it with excellence. Just think of the reunion you will have with him! Rest in peace, Boscoe.
Linda
Posted by Linda at 6:00 AM

It is one of the hardest things to do Toni.
I am thinking of you and your family here tonight.

How blessed both Boscoe and Toni were to have found each other. I pray for peace for Toni as it is one of the hardest things to make that "informed" decision. But, pain is definitely a deciding factor. Linda, how comforting of you to meet Toni at the Vet.

So sad for Toni-Boscoe seemed like a sweet little guy.

This is heartbreaking.
I am so sorry for your loss. Just know Boscoe will forever be in your heart and will always be with you.

R.I.P Boscoe!!! It's so hard to say goodbye to our furry family members!

My heart and prayers go out to Boscoe's family. I know the pain in your heart, I lost my Lu too. Boscoe had the sweetest, and kindest face a pup could have. Thank you for loving him, I know he will be missed.

As hard as it was, you did the only thing you could do to end Boscoe's pain, Toni. We had to have our German Shepherd put to sleep in 2003 and I still cry when I think about that day.
I am sorry for your loss.