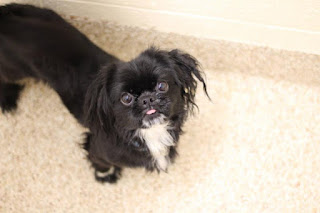 Oreo was turned into a big shelter by the family of his owner.  His owner was elderly and could no longer care for him. 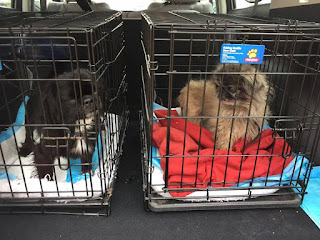 Oreo and Prince were at the same shelter.  Both were extremely thin.   Prince was taken to the vet the same evening we got him-- very critical.   But, Oreo is young, just two years old. 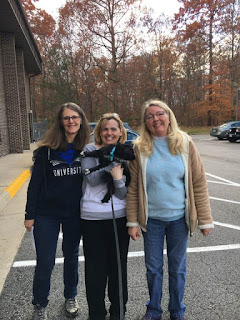 In rescue, volunteers (and we are all volunteers) are what makes rescue happen.   Ida, Laura, and Jackie were all on board to get Oreo vetted!   I'm SO grateful for these ladies!!  They are awesome! 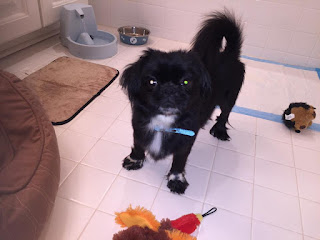 He stayed at Laura's the first night.   She gave him a bath, trimmed some knots off (why do Pekes always have knots on their ears!).  Laura wrote this:
"Meet Oreo. Potomac Valley Pekingese Rescue has stepped in again and given this little pumpkin reason to be thankful this holiday. I'm tearing up as I write this, because I am watching him tossing his little squeaking turkey toy around after having enjoyed his dessert, which was just a bit of the real thing. I don't know what his situation was before he arrived at the city shelter in Baltimore. He is emaciated. But he hasn't let that get him down and is as happy as a little clam. I lost count of how many kisses he has given me! His fur is exceptionally soft. And boy, he is a playful little dude ... he looks a lot younger than 2 years. I would've pegged him at under a year! This little dude is 100% pure sugar. He is one of the sweetest dogs I've ever met. It will be extremely difficult to say goodbye to him tomorrow. My heart is hurting at the thought. I need to be honest with myself that most times I feel like I'm barely managing with my four dogs. Whoever adopts this angel will be an incredibly lucky pet parent." 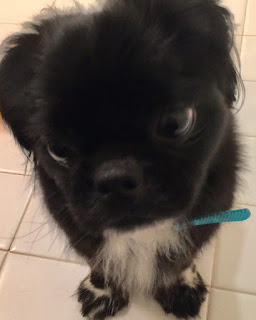 He was so good. 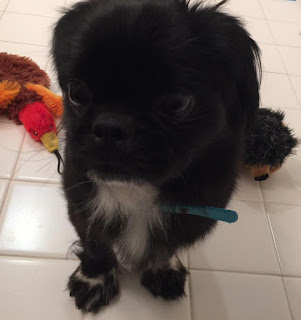 He is only 7.5 pounds and SO very thin.    But, he ate with gusto and gave lots of kisses! 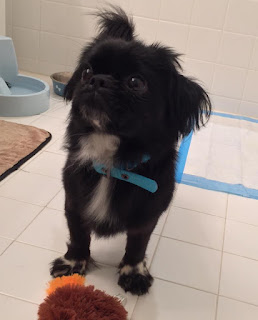 He needs to be neutered and then will be up for adoption-- after Christmas.   Welcome to rescue, Oreo!!
Posted by Linda at 12:30 AM

Oh what a sweet boy he is and what fabulous volunteer's you all are!

You know I love a black Peke Linda and Oreo will be a beauty when he gets some food into him and better health!

Oh how sweet oreo is. We would love to have more information about him. He would be a welcome addition to our mother & father in laws familys . They just loss they beloved peke to old age this past august.

We would love more information on Oreo . He would make an excellent addition to my mother & father in laws family . They lost their beloved peke this past august to old age . And miss him so very much.