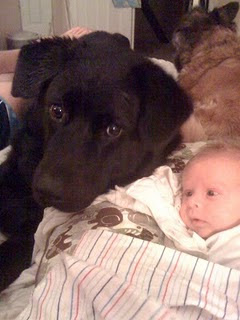 It's hard to believe but black dogs and cats are the last to be adopted. I think they're beautiful. This is Leo, a black lab mix who was adopted by my daughter and son in law. When Beach Bit arrived, Leo was in love. He now had his own baby. Leo was adopted just in time. He had 12 hours left before he was going to be put down. He was sick and black and everyone passed him by-- except my son in law, who fell in love with him. I went with him, and had worked with this shelter in helping Pekingese. To make things easier, they just gave me Leo as a "Pekingese." Biggest Peke I ever saw! 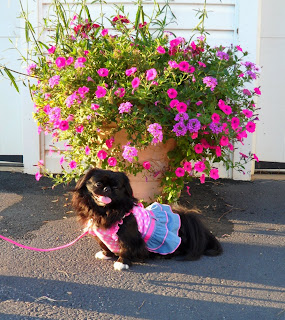 Little Desi was never in a shelter, but if she had been, her medical issues, along with being black, would have made people hesitant to adopt her. It's hard to believe. She is the little princess in her home and dearly loved. 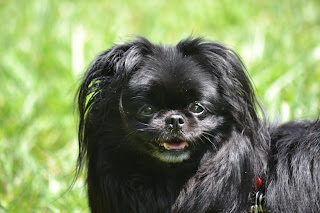 Ellie was going to be put to sleep. I was called to a shelter and if I didn't take her, she was being put down. She wasn't a Peke, but I couldn't leave this tiny girl there. She now has "rescued her mom" who said this sweet girl has changed her life. 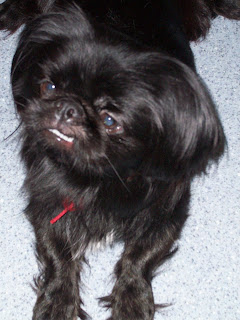 Midnight, "Ringo," was in a shelter, too. They gave him to us because he was sick. The small dogs have a better chance of being adopted, but the large dogs-- and the black cats-- have little chance of finding a home. 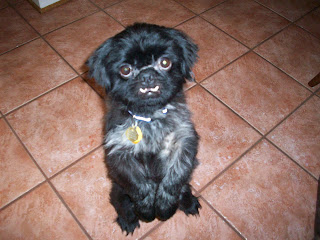 And sweet Poochie! He was part of the Bristol 18. All he wanted was love. And he has that now! His own mom and little girl love him to pieces. Since he came out of a back yard breeder situation, he was in horrible shape. He wouldn't have made it out of a shelter. Health issues and being black were against him. 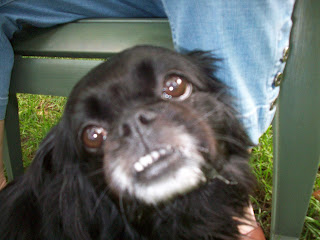 Portia was in a shelter, too. They asked us for help, knowing she had little chance of being adopted. She now has her own home in Maryland. 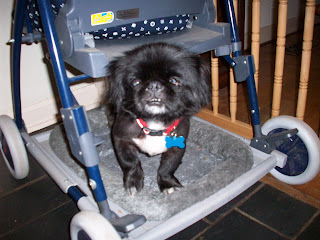 Jasper came from a shelter-- he was matted and filthy and no one would have seen past that. Plus, he had a bad eye, and no chance at the shelter. He now lives where he sleeps in the middle of a big bed at night, loved so much by his family. If you've adopted a black dog, GOOD FOR YOU!! You gave him/her a chance. I personally love these little black Pekes-- I know a lot of you do, too. Read this article below for more information.

Click here: The Time of Year to Think About Colorblind Adoptions
Posted by Linda at 1:00 AM

Oh my Linda- I never knew this!
My Grandmother, who I lived with, came to Australia from England when she was in her 20's . My grandma passed some years ago but ... if we had a black cat arrive at our house (dumped , my family were "cat people" and those sort of people Know where the suckers live) well, we were NEVER allowed to try to find a home for a black cat !! You see, my Grandma was Very superstitious and black animals who live in your home are VERY lucky and you MUST never get rid of them - my Grandma did not believe they were Bad luck but VERRY Good! .

I love a black Peke or any black animal and why people pass them by I do not know but .... I was brought up knowing that black animals are VERY lucky! Oh yes, my Grandma had ALOT of good luck and bad luck things we could and couldn't do and I still do a few of them these days! LOL

What kind of dog is Ellie if not a Peke? She's beautiful! I have always loved the look of solid black Shih-tzus. Ellie has that look. Their faces grab me. :) Stunning.

Black animals are just as beautiful as all the others; I know that sometimes it's more difficult to make out their features/facial expressions....I've noticed that with my black cat Middi, but she was a beauty! There's a black feral cat in the bunch that I feed and I think he/she is the prettiest one...with her long tail and shiny coat (Yes, I feed them well) and I'd give anything to pet her/him. So sad that this prejudice exists even in animals. I wonder if that will ever change. Thank you for all the wonderful work you do with rescuing our beloved animals that turn out to be our forever pets and big loves.
Bless you and all the work you do - all of you!