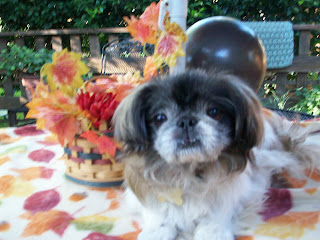 We had a fall photo session. I wanted cute pictures of the dogs I have for the web site. So, we set it up-- and I took 87 pictures!! Thank goodness for digital where you can just delete the ones where the dog turns, disappears, move fast and creates a blur.... I have a lot of "bad" pictures. 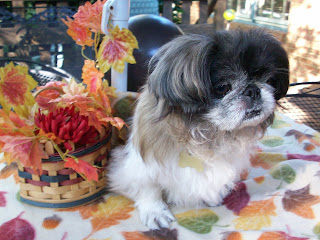 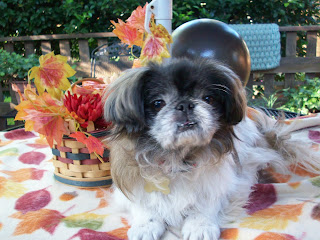 And here he is with that sweet look on his face. Wilson has a lot of gray on his face, but the vet says he's only 4-6 years old. His teeth are amazing and don't come close to needing a dental. And we know he didn't have one before, because he was in horrendous shape when he came into rescue. 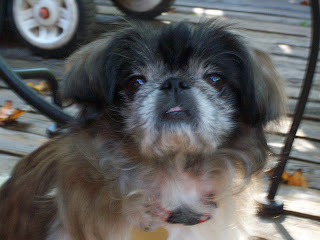 His skin was infected and his hair was missing. It's growing back now and his skin is healing. He just has a lot of white and gray on his face. 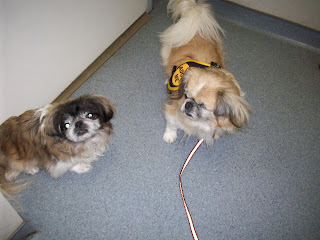 We went to the vet today so he could finally get his shots. It's been a month since we've had him, but he was too compromised to even have shots. Here he is with Zeke. I'll do a blog, too, on this sweet boy. (If I could keep another, he'd be it! He is an amazing little boy.) 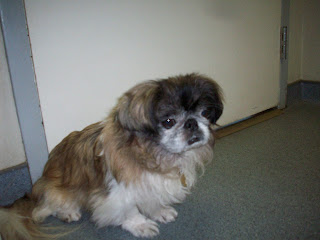 It was Wilson's turn though, so he waited pensively for the vet to come in. It was one of our favorites, Dr. Evans. He's GREAT! (Acredale Animal Hospital in Va. Beach) He was so pleased with how well Wilson has done. 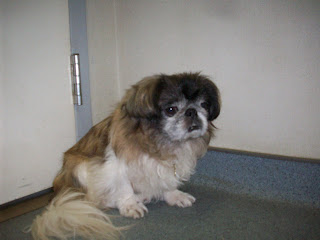 Wilson is 11.5 pounds and housetrained. He loves toys and will occasionally will run a marathon around the house. ;-) 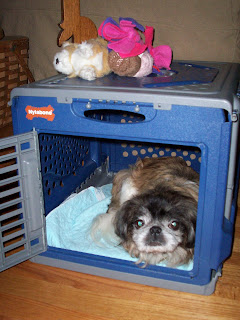 And then he'll get into a little crate that's just for him. He loves his hidey hole. He's just been visiting my house for five days while his foster mom and dad went out of town. But, they're back and he's gone home. It won't be the same. I'll just have six Pekes here now. It was fun with eight-- and they all got along! If you're interested in adopting Wilson, just email us! potomacpekes@gmail.com
Posted by Linda at 1:00 AM

What an adorable little boy - I sure hope and pray he finds his loving forever home soon...he will make someone very, very happy. I love his little "wise old man" face ;-)