PEKES IN THE AUTUMN 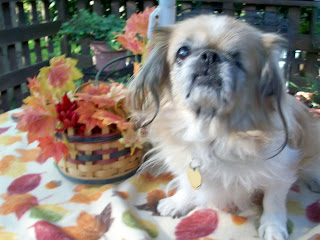 I told you we had a fall/autumn photo session. I wanted some colorful pictures of the dogs. They all cooperated and I thought there were some adorable pictures of them. It only took 87 pictures to get a few good ones. I have lots of blur, parts of dogs.... digital is great because you can just delete the bad ones! Zeke took great pictures. He was very calm and just sat on the table. Zeke is such a sweet dog, very loving, enjoys tummy rubs. 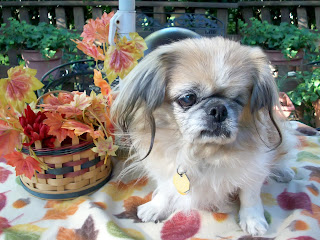 He's older, maybe 9, but he has years to give love. 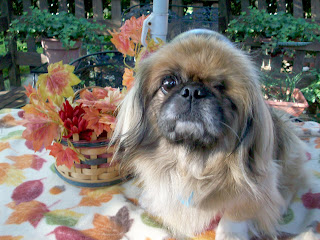 Here's Odin. (I know, Audrey, you love this one!) Odin loves toys, which he has discovered. He will grab one and race around with it. He would like to chase cats, so he might not be the best fit for a home with cats. Other than that, he's perfect! 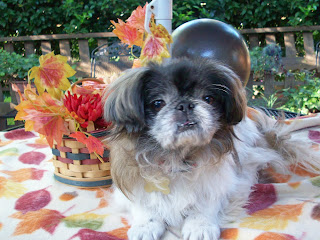 Sweet Wilson is fairly new to rescue. He has a lot of gray in his face, and had a severe skin infection and kennel cough when he came into rescue. He's healing so well though. In spite of the gray, he isn't that old. The vet thinks he's 5-6 years old because his teeth are so good. He was already neutered, and didn't need a dental or other surgery. Just medication which he won't need for long. 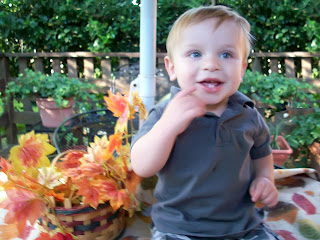 Whoops, that's not a Peke. That's Beach Bit. He got his turn on the table, too. He loved the photo session. 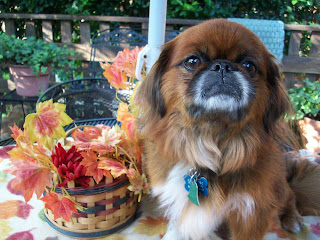 Kai Kai has this "woe is me" look on his face. It's his look. His Chun Red color fits right in with the autumn colors. 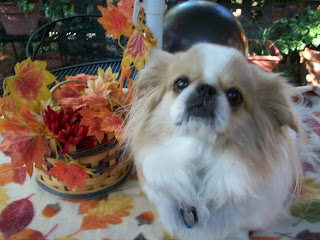 Starlight wasn't going to be left out! I can do anything with this little girl. Look at that sweet face. No one adopted her, so she stayed with us. Everyone was afraid of her-- but she's a dollbaby inside. She's been here about three years now. 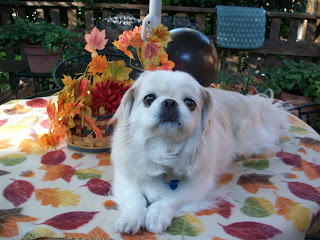 Cranberry relunctantly agreed to let me take her picture. She really is above all this. She's the queen here. The Alpha dog. The "oh, there's a new foster here, I'm going upstairs" girl. But, I love her. 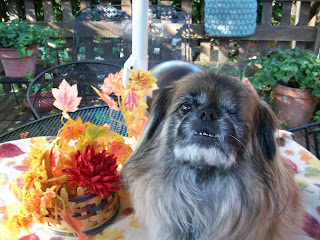 Max has been here over two years now. I never could figure out why no one adopted him. He's such a sweetheart. He just turned eight! I can't believe it. I now have 6, 7, 8 and 10 year olds here. No youngsters! 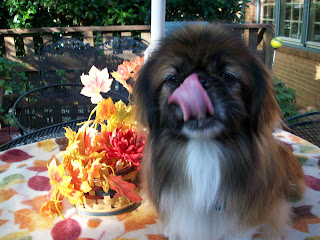 Last, here's my sweet Scooterbug-- my therapy dog who lets the new fosters know they are safe. And he has the longest tongue! 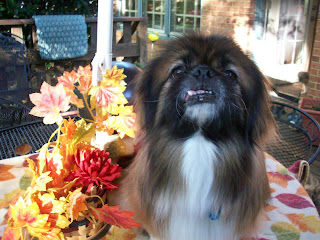 You're a sweetheart, Scooter! If you have fall/autumn pictures, send them on! haveninhim@aol.com
Posted by Linda at 1:00 AM

What a bunch of Autumn Cuties!

We have had just the biggest thunderstorm and I have been offline. Today was a touch cool but our summer is on the way.

Mmmmm - I think I can "do" a Autumn look photo shoot tomorrow with Moi and some of my orange roses !
We will have a try Linda :)