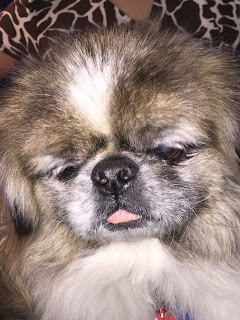 Chumley came to me as a foster in September of 2014. 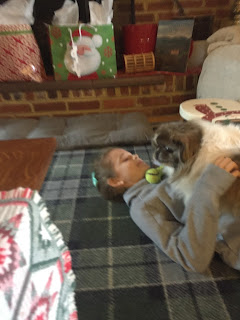 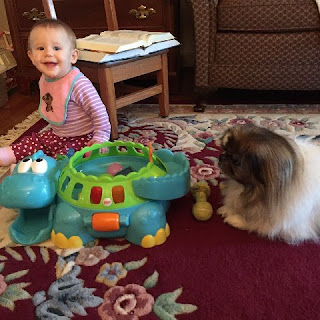 Sugar Bit adored him and he even let her throw his special toy-- the dumbell tennis ball. 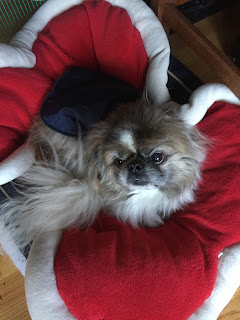 One of my grandbits fell in love with him.  But, they couldn't have another dog at the time-- they already had three  (and two cats, chickens, ducks, horses...).   So, we adopted him for her. 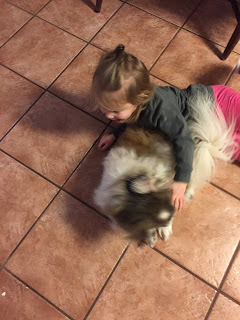 Chumley is a very allergy-dog.   He's on special food, special treats and special meds/shots.   He has to be bathed in his shampoo at least once a week.   Like most of the dogs here, he is special needs. 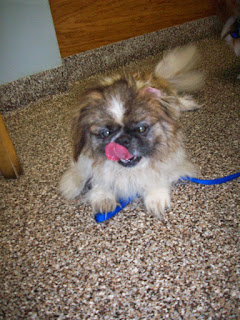 When he came to me from the shelter, he had sores all over his body. 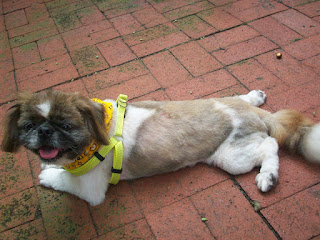 He had to be shaved down so his skin could heal and to get the mats off. 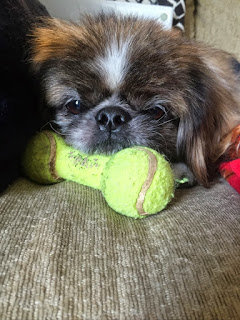 He is great with the other dogs here, too, but he is mostly about his people. 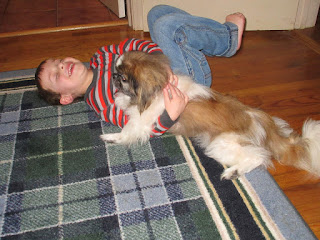 And they love him-- and throwing his toy and giving him hugs.... 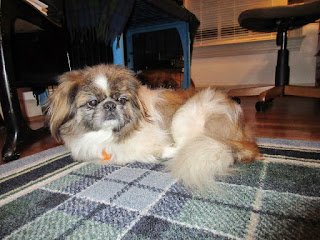 But, the other day, I was fixing breakfast.   They all love breakfast and dinner and it can get noisy by the dog desk in the laundry room.   Then, I noticed a few dogs were not there, and I heard noise in the next room.   I went in, and there was a medical issue happening with one of the dogs.   Chumley did not leave the area, hovering close by/next to the dog in distress.   This is unusual because Chumley loves his food-- and he knew I was making it.   But, he was staying close by the one with the problem.   I sat on the floor, watching, comforting and so did Chumley.  Then, I realized, this was an issue that required getting to the vet fast.  I ran to change out of my pajamas, and Chumley still stayed by the side of the one who was having the problem. 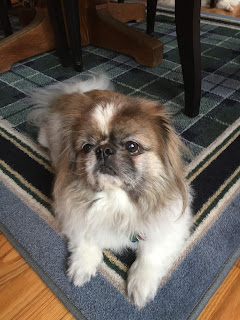 I'll tell you that story later-- (that dog is stable now)-- but I wanted to give Chumley HERO status today!   He showed me a side of him I didn't notice before.   Good boy, Chumley!!!
Posted by Linda at 12:30 AM

What an uplifting story. Chumley standing by when one of the others was in distress.