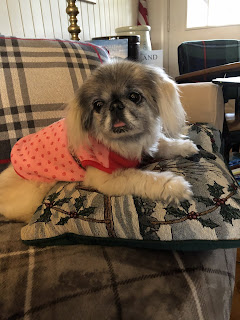 Clara has been w me about three months now. 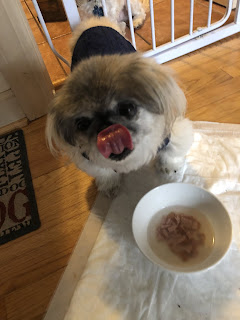 I had to think about it.   It doesn’t seem that long. 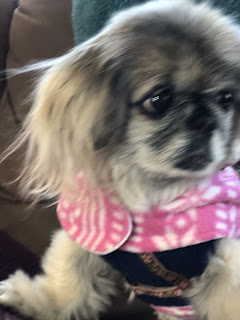 She was not healthy when she came to me. 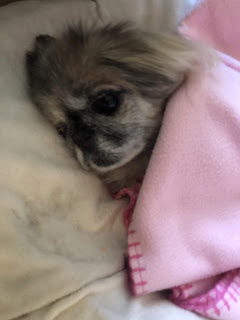 Her mouth was in horrific shape, with teeth barely hanging on. 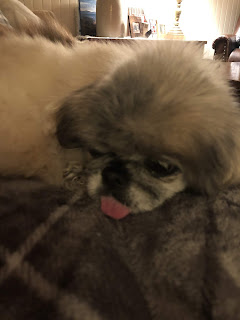 She couldn't hear anything.  Nothing. 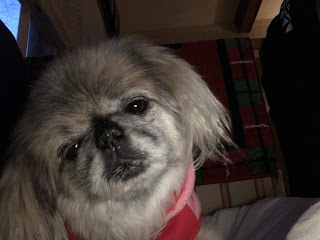 She had been shaved down, so I don't know what condition her coat was in. 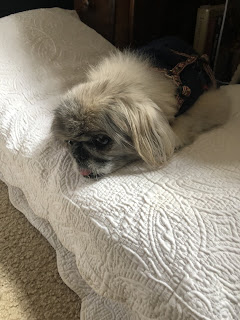 Clara had been adopted from the rural shelter four years ago and then returned. 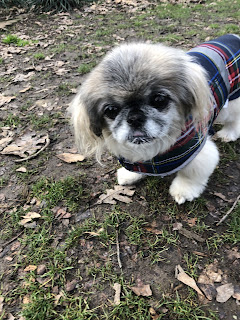 I don't think she was mistreated, but she was never taken to the vet. 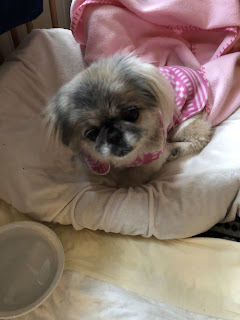 She had to eat soft food because of her mouth condition, but she did eat. 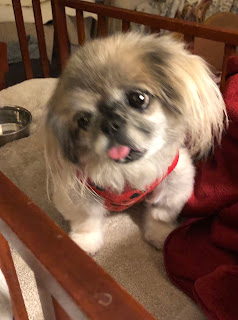 I set up the baby crib/bassinet in our room next to the bed.  At first, she wasn't too sure, but then after hanging out with us, she would wander over and ask to be put in to sleep.  I had a blanket in there and a water bowl in case she got thirsty during the night.  One night she did wrap the blanket around herself and I woke up during the night to her staring at me.  I "unstuck" her, and she went right back to sleep.  Her stare must have been very LOUD.  :-) 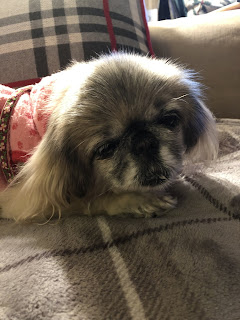 Two weeks ago, the change in Clara from one day to the next was significant. 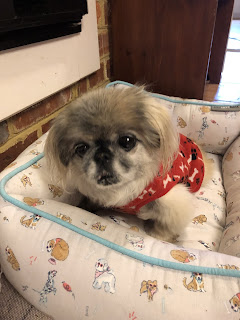 Her head was tilted to the right -- she stumbled as she walked. 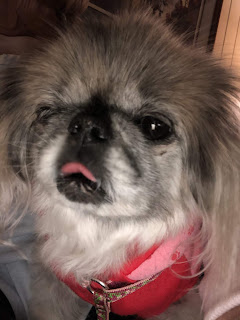 She didn't want to eat or drink.   There was such a change in her. 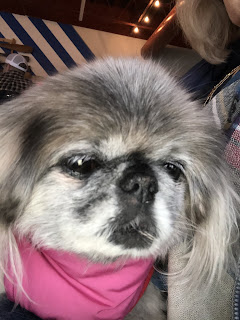 I thought stroke or vestibular disease-- of course, she went right to the vet.   Bloodwork was done, ears were checked.  Those were both fine.  I watched her closely.   After my vet consulted with a specialist, both felt that the other signs Clara was having could indicate a brain tumor.   I was devastated. 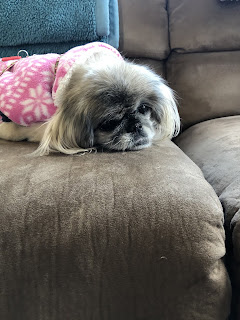 Without doing an MRI, we can't be sure, but we can keep her comfortable and love her.   She did begin to eat again, but only things I made-- not dog food.   She loves boiled hot dogs-- with the water they were cooked in.  We want to keep her hydrated, so she has been getting sub-q fluids when she needs them.   Keeping her comfortable is my highest priority for her. 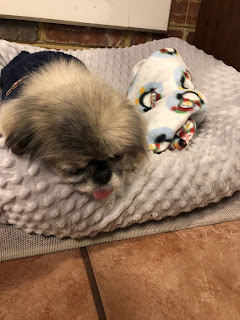 For now, Clara seems to be comfortable.  She loves to be carried.  She has medications to help with any brain issues she may have, and we will continue using those.   My vet is very involved in her care.   I know so many of you have been asking, "How's Clara."  So, I did this blog to catch you up.  I could only share with a few until I could accept the possible diagnosis myself.  Clara could have a few months or she could beat the odds and live a long time.  And she will not be put up for adoption, but live the rest of her life here, with us.  We love her-- so that's okay.   💜
Posted by Linda at 12:30 AM

Big Hugs and Kisses to you all from the Aussie's XXXX

Thank you for this blog i was wondering about Clara. She took my heart as well. thank you for your loving her and caring for her. God Bless you both. Linda

I felt in the back of my heart that Clara's hold on life is tenuous and changes happen fast but at the same time she is tenacious and will hold on as long as her will is strong and being in a very loving home plays a big part in her will to remain with us.

We fall in love with these little ones and Potomac and Linda put up a good fight to give God's little creatures a fighting chance. That's the most we can expect and accept.

Sad for her but happy she is with you god bless

So sad for little Clara. Just love the time she has to share with us.

Linda, you are such a blessing to these precious babies, and to us ♥️ So thankful for you!

Precious Clara, you remind me so much of my darling little Muffin. My heart has such a soft spot for the "little ole ladies" like you. I melt each time i see your precious face and my arms ache to hold you. Knowing how much you are loved, cared for, catered too and prayed for brings tears to my eyes and happiness to my heart. Ive never met you Sweet Clara but because of my precious little MuffinDoll (8/5/03-1/7/18) I hold you close in my heart with special prayers just for you.

Linda, I’m sorry to hear about Clara but not totally surprised. She is so fortunate to have you to love and take care of her. She could never have better. Your love for these dogs is unparalleled, which is amazing for beautiful little Clara! God Bless You. ��

Thank you so much for the update but most of all Thank you from the bottom of my heart for all you do for these sweet, courageous creatures. What a ride we take when we bring the life of another being into our home especially one that depends on us for everything. I admire your strength and courage to make the hard choices. The love that you show Clara is so beautiful. Praying for comfort and peace for Clara, Linda,
Potomac and all those who love their babies whether they are ailing or healthy.

Thank you for the update and for caring so for her. She is beautiful.