I wanted to share a story with you about a one-eyed beagle that was saved from a kill shelter. He stayed with a couple in NC until transport could be arranged for him to go to the rescue group that was taking him in. They called him "One Eyed Jack" or Jack for short. Like many dogs who end up in shelters, he was timid, but felt safe with his temporary family. 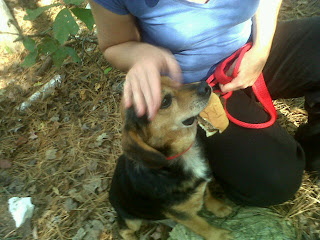 However, on the transport, even though he was on a leash, he somehow got out of the car in Richmond. Immediate alerts were put out and rescue volunteers from all over came to find him. They stayed all night, after figuring out the area he was in, so they could at least try to keep him safe. He was darting across busy roads and was absolutely terrified. This is every rescue transporters worse nightmare. They even went to get him a hamburger from McDonald's-- something he loved a lot. But, he would not let anyone near him. The following morning, after a night out alone (but with volunteers close by), his foster parents showed up after driving hours to get to where he was. As soon as his "dad" called his name, Jack ran to him. And Jack went home with them-- to stay with them forever! Jack now has his forever home. 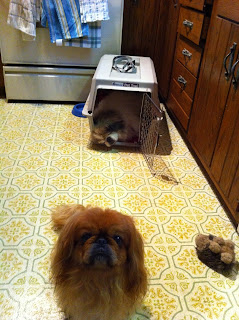 Here's Hayden, one of our foster dogs. He has serious heart issues and we don't know how long he'll last. He has an enlarged heart and a severe heart murmur. He went to rest in his crate in the kitchen, and it was full! His foster mom's dog, Thomas, was in there taking a nap. I think Hayden wants his foster mom to do something about it! :-) And she is-- she's loving on him, to let him know he's safe until it's time for him to go. 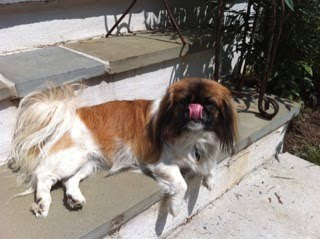 Fu was adopted (not from our group). I think she is living the life now! And her new best friend in the world is Caleb, one of my foster dogs. 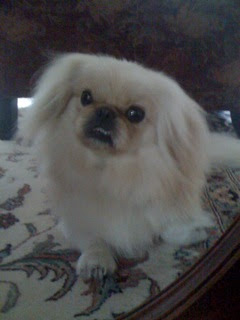 Sweet Caleb came in with three others. He's SO CUTE. But, he has a mind of his own. I told his new mom this-- and she now realizes it's true. Sometimes, Caleb is just "downright naughty." But, he's so cute, it's hard to get mad at him. He just grins at you and it's hard not to laugh. He keeps his new family very entertained!!!
And last, here is a video of a dog meeting his new family. We foster parents are just a bridge (an important bridge!!) to helping dogs find their forever families. This video is heartwarming.
http://www.care2.com/causes/animal-welfare/blog/see-a-happy-dog-adoption-video/
Posted by Linda at 5:00 AM

So many beautiful stories today Linda .

Hi Jeanne! Had a great time and will send some photos on .

I have a special spot for Hayden. I think if you are that ill and very tired trying to breath and keep going , its so wonderful to know he has a loving home for him to feel safe, rest and live as long as his heart will let him.

Wonderful stories Linda. Thank you so much for sharing them.

I am so glad that Hayden is going to live out the rest of his life in peace and love and comfort. He deserves nothing less.

I'm glad Jack wasn't injured and his fosters decided to keep him.
Blessings for Hayden. I just started giving Mocha homeopathic drops for his heart condition along with the meds he's been on for a year now. I'll let you know if we see a difference. It's called Hearty Heart and the testimonials sound promising, if in fact they are truthful.