RESCUE IN THE FAMILY 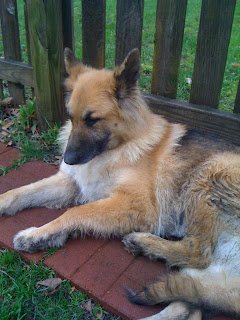 This is not a Pekingese. :-) My daughter called me while I was at church this morning. Since my phone was on silent, I didn't know it until an hour later. She had found this dog laying by the side of the road in a gutter. She had a shaved area on her neck with a burn on it. We thought she was hit by a car. 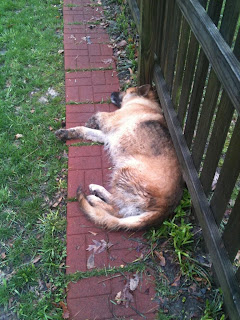 We called a name on Craigslist (thanks Jeanne for looking that up) that had lost their Shepherd. They came right over-- but it wasn't their dog. (But, my husband had been driving around trying to find the owner and saw another dog-- he was able to take the people to the area where he saw this one and they were able to find their dog!! Two saves in one day.) 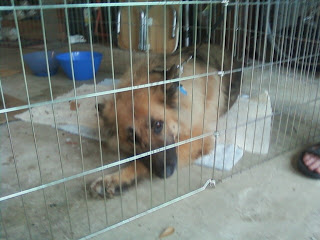 We called animal control (I didn't want to take her there if I could keep her safe for a few days) and the owner had called. Sydney was the dog's name and she had been rescued in the last week. She had been a breeder dog for 6 years and had just been saved. We had a big storm last night and she got out of the house somehow. 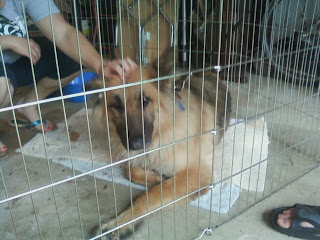 She is now home and safe. She will learn house manners and will soon know she is loved and has a forever home. The burn mark on her neck was from a shock collar the breeders kept on her. So sad, but now she won't have to live that life again. So, even though she isn't a Pekingese, I had to put her on the blog. Last week, my other daughter found a dog, and kept it until the owner was found-- her daughter, Bitty Bit, asked if they could rescue dogs. Her mom said if they showed up at the farm, they could. I guess rescue runs in the family. ;-)
Posted by Linda at 1:00 AM

I think your family should have a TV show !!!

"Dog Rescue Family" would be a good name for the show too! We will watch it!

How terrible to put one of those shock colars on a Dog!!! They are ilegal here .