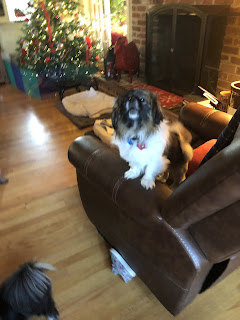 This week was hard losing Newby.   His temperature got up to 109.  So, I wanted to share information with you on what is normal.   Bogie wants me to share, too. 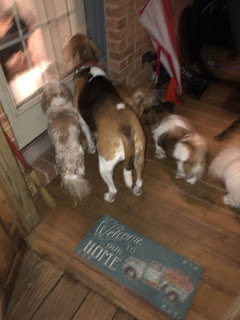 In the winter, there is little chance of heat stroke.   My dogs (mine, my daughters, and fosters) gathered at the door to come inside.  It was in the upper 30's to low 40s.  This is when I put coats on some of them.   There is always a large water bowl on the porch, summer and winter, so hydration isn't a problem.   In the summer, I do not let them stay outside long.   Some LOVE the yard for a nap, but it's so important to make sure they don't get over heated.   Normal temperature for a dog is 100-102.  It's higher than our normal temperature. 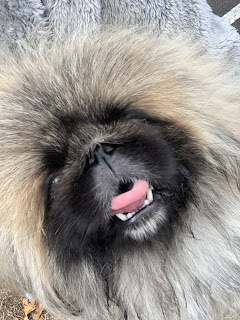 Newby came to us, and he was panting a lot.  His owner thought he was hot.   Dogs DO pant to cool down.  But, in the winter, they aren't getting too hot.   Panting could be a sign of another problem and it should be checked out by a vet.   Newby's temperature was 102 and it went up. 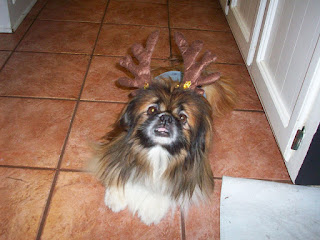 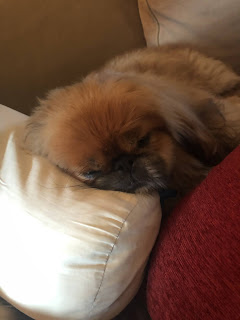 (Paddington above, taking a nap.)  When the temperature begins to rise, not due to heat exposure or sunstroke, a medical issue is happening.   If the temperature goes above 102-103, the dog should immediately get to a vet.  103 can be from excitement, and you can cool them off by putting alcohol on the foot pads to open the pores.  You can cool them by standing them in tepid, not cold, water.   You can put a fan on them.  But, after 103, medical crises can occur.   NEVER give acetaminophen or ibuprofen because these can be toxic for a dog.
Newby was already at the vet, and his temperature began to rise.   It went to 103.   Vets were constantly involved in his care.  But, his temperature began rising.  It went to 106.   Above 107, there is a high risk of organ damage.   Brain swelling and kidney failure can occur.   Newby’s temperature was 109   He was struggling to breathe.   The temperature of 109 can effect the brains ability to send messages for breathing.  Newby was intubated (a breathing tube was inserted as he could not breathe on his own), but the body temperature continued to stay high.  He became unresponsive.   Death was imminent.   So, what are the choices at this point-- not much.   My choice was to be there for him, or not be there for him.   I raced to the vet.  Even though he was new to my care, he was still "my foster" and I would be there for him.   I kissed his head, I held him as we ended his suffering.   Letting him go "on his own" would have been cruel.   We wanted a peaceful end.  And we gave him that.
I needed to write all this down for those who think I "could have done more."   There was nothing else that could be done.  The vet calling me to come immediately told me that.   He is at peace now.  I did all I could.   Thank you for listening. 💕
Link on Stenotic nares:  https://vcahospitals.com/know-your-pet/brachycephalic-airway-syndrome-in-dogs
Posted by Linda at 12:30 AM

You did more and above Linda !