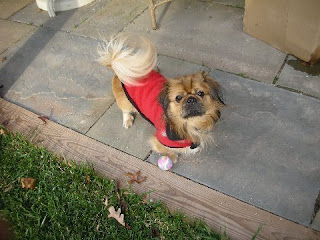 Wu-Ling came into rescue several years ago after being kept outside in a dog house with a light bulb to keep him warm. I had a farewell to him last month. 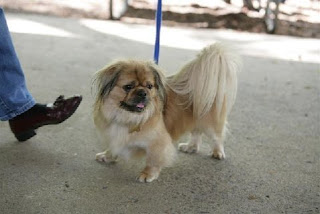 His foster mom, Maria, loved this little boy who was full of mischief.
Wu-Ling died of bladder cancer. His foster mom wrote about a dream she had of him-- I wanted to share it because I thought it was so beautiful. She said " It's my way of consoling myself, though I prefer to think that the little ones come to say they are ok and say one final goodbye. I really did love that little guy and would be glad to have him remembered." 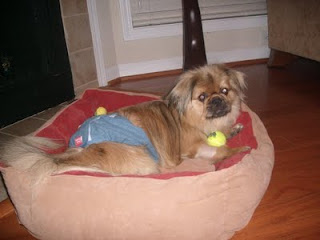 Here is what she wrot about him:
"I've been thinking about him, so much so, that I dreamt about him last night. I was in a lovely, well taken care of park with lots of trees and bushes. It had sidewalks and benches to rest on. Then, I saw him, well groomed, shiny coat, with a pretty collar on. He was wandering around taking in his surroundings. Hope (my foster dog) was following him around. I called to him in a chant "Wu-Ling, Wu-Ling, Wu-Ling, Wu-Ling" as I used to when I fostered him twice. He heard me and paused, looked at me aloofly, for a second and then, nonchalantly walked off. Hope started to follow him, but I called her and she came. I picked her up and started to follow him to get him and bring him home with me, but then I saw a woman and asked her if she knew who looked after him. She said that the women that took care of the park took care of him, groomed him, fed him, and loved him, even scolded him when he needed it. She said that he must like it here because he didn't leave, at least not for very long. I then glimpsed toward the care-takers' dwelling and saw a woman, with her hands on her hips, scolding him gently, in a sweet voice, telling him that he had gotten dirty already. He was just standing, there looking at her attentively. So, I I took my Hope and left without him. I guess I've been feeling sad that he was not understood by his previous owners...he had so many caretakers in his little life. I suppose I've also been wishing I had done more for him. But, he must be content, now. " 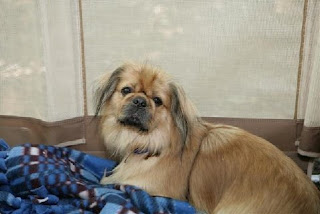 Maria did all she could for Wu-Ling. She loved him and worked with him and tried to help him find a forever home. She did what we all do with our foster dogs-- we do the best we can. Thank you, Maria, for loving Wu-Ling.
Linda haveninhim@aol.com
Posted by Linda at 6:00 AM

Maria , Wu-Ling knew you loved and cared for him for dogs are very clever - especially pekes.
Pekingese really do have that ancient wisedom from above and he is now looking out for you.

what a sweet message from Wu-Ling from the other side. I hope Toby is also playing in the same beautiful park!

Maria, this was surely more than a dream and please don't think you didn't do enough for Wu-Ling, because he wouldn't be sending this comforting message to you if you weren't special to him. It's so cute that he still needs gentle scolding:) Your experience is a comfort to me because it shows that our pets will be in heaven waiting for us.