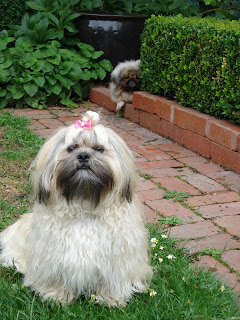 I talked about Moi-Moi yesterday and how much she has to put up with Kenzo. Kenzo is adorable, but he is really full of himself. I bet his mom has to spend some time grooming him, too. 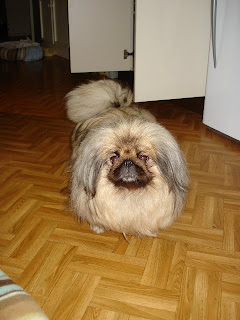 Moi-Moi is just trying to pretend he's not there. 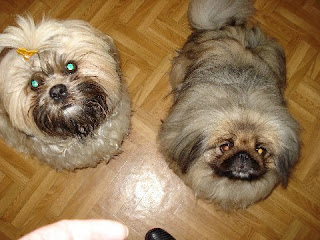 But, he is-- there is comes. He loves Moi-Moi. But, she's a dignified royal little girl and some of his antics just push her royal limits. 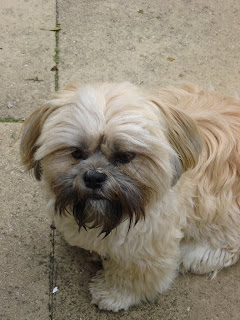 Kenzo tries to behave, really! He does. But, it's so hard when you have so many ideas for playing and running and getting into things. 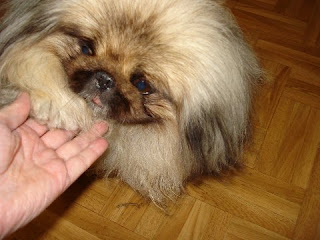 Moi-Moi is just into being quiet and regal. Moi-Moi knows how to give her mom a high-five. Look at that tiny little paw! And do I see a little bit of Peke tongue there-- yep, that's it! So cute. 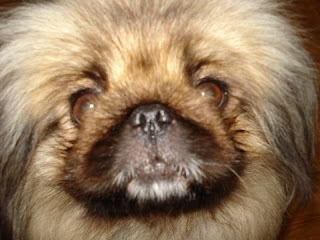 Moi-Moi,I know you'll eventually get Kenzo to understand who you really are. In the meantime, you'll just have to put up with him. You are just so cute.
Posted by Linda at 5:00 AM

Lovely to see our little Australian friends! Adorable! (I have no other words to describe pekes--I really do adore them all!)

Awwwww. Kenzo is so cute! He looks like he can be such a good brother. Moi Moi I just love your pictures!
Hang in there cutie pie.

Too cute! I love the high five and Kenzo's hairdo.

I love Kenzo's bow:p He looks far too sweet to be a terror;)

such beautiful babies, Lady Jicky. Thanks for posting them Linda.

(How do you pronounce Moi Moi's name? Like the french Moi? or "Moe" or Mo-ey?)

Kenzo looks quite innocent in these photos, but we've heard about all the mischief he gets into:) He sure is cute! Love the last two photos of Moi-Moi!

Mary Elizabeth there are many ways to pronounce Moi Moi and some spell it Mau Mau - the "they" are chinese people!
Moi is named in honour after my lovely dog groomers Shih tzu ! Patricia is Hong Kong Chinese and she says it like Mow mow - in the Cantonese way - her dilect . The Mandarine chinese would say Moy Moy and that is the way I say it - it is easier to say and call to me!
When I walk them and some Chinese people (we have alot of chinese immigrants here in Australia) hear me call her they look surprised for I am not Chinese heritage and they say "Ooo, that means little sister or little girl" and I smile and say "Yes it does and Moi Moi is a little girl too!" LOL