COLBY AND HIS EYE 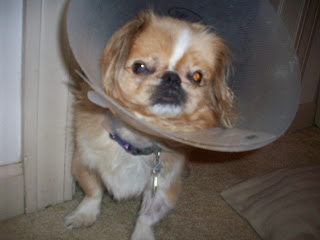 It seems in rescue, we are dealing with a lot of eye issues. Coco Puff, above, had her second eye surgery last week. She is the sweetest thing and so affectionate. She is doing so well with her eyes and she doesn't mind me putting her eye drops in. 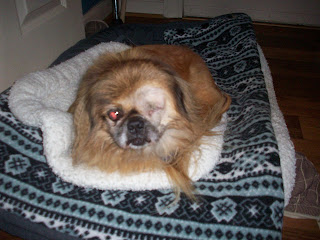 Wicket, who had his eye removed, due to a tumor, glaucoma and retinal atropy, is doing great, too. He had his stitches removed today!! YEA! 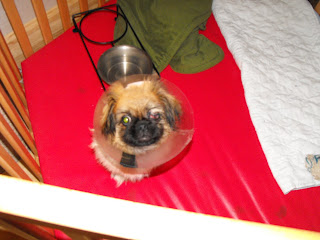 Colby, our four month old puppy foster, had his eye surgery last week. He had to have a second "minor" surgery since he popped one of his stitches, but he is doing well and playing with his toys. 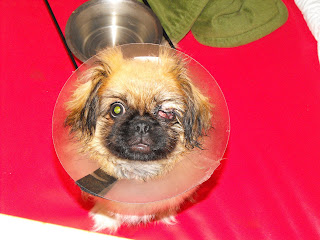 I know it looks bad, but these Pekingese have a resilience I don't see in most people. They don't think, "oh, my life was so good, I used to see so well." They just take each day as it comes, see what they can do, and go from there. He is trying to play and not "fretting" about his eye surgery. 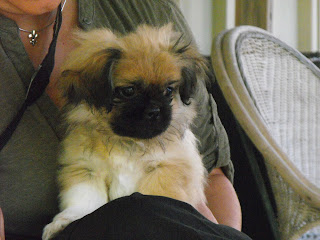 And pretty soon, he will have his stitches out and be free of the e-collar (I would hate having one of those around my neck!) and be free to play and not be in the playpen! And Colby has a home waiting for him for Christmas!! I'm so excited for him!!
http://www.youtube.com/watch?v=CBAFBFGBLOM Here's Colby playing!
Posted by Linda at 5:00 AM

Oh dear Linda, it is raining eye problems for you all at the moment.
They look so sore - please give them a huge hug from me.

Peke's are the best dogs! I am waiting on an appointment to take my Peke Anniebelle to the opthamologist. Poor baby has either a tumor or granulation tissue inflamation. Either way it is taking over her eye. I just don't want to do surgery as she is 15. Have you had eye surgery on dogs that old? I'm scared to put her under. I just want her comfortable and happy!!

Do you have the appt. yet? Who is it with? Dr. Nadelstein is the BEST-- but the others are good, too. Sometimes, it comes to saving their life by taking the eye out-- and getting rid of the pain. I know 15 is old to be put under, but the opthalmologists deal with all ages and are really good.
Linda haveninhim@aol.com

It only takes one eye opened to find your true love, and these guys and gals are true loves!