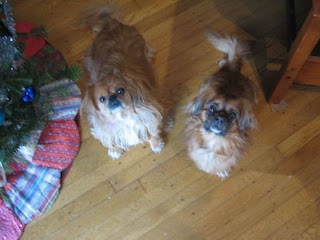 Maxwell and Tyler were two Pekes adopted from us. They have the best mom and dad! They used to live near Blacksburg, VA, but they've moved to Hollywood, CA and so now they are our west coast/Hollywood Pekes. These picture was taken over four years ago. 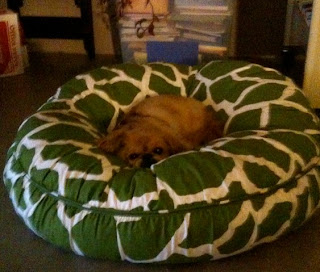 Maxwell is getting to be an old man now. He was adopted in 2006, and I'm not sure how old he was then-- Robin was his foster mom, maybe she remembers. He looks pretty good for an old man! I think this is Tyler-- it's hard to tell from the back. :-) And you know Pekes share their dog beds, so that doesn't mean anything! 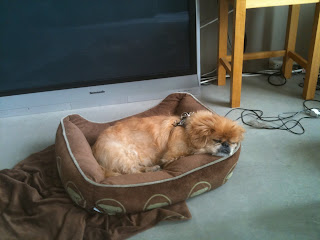 I don't think they'd pay attention if we did-- they look totally relaxed! Especially Tyler! Yep, that's a Peke for you-- What a life!
Posted by Linda at 5:00 AM

Ooooo I love that green and white bed - it sure looks comfy!

That last picture is great:)

Great photos! They have an abundance of pretty plush beds to choose from and he chose the floor :)

Very cute! I'm with Emily! That last one is a riot!