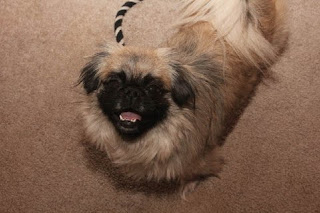 Sasha came from a shelter near me-- she was not happy in her kennel there, so they turned her over to rescue. 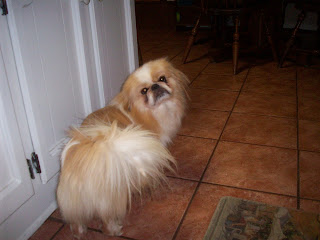 Legend came from a Maryland shelter-- he was also not happy there. Can we see a pattern here? I don't think Pekes take kindly to being kenneled in shelters. They want to be in charge. 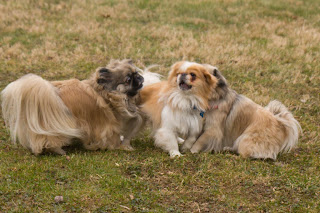 They became BEST friends at their foster home and were adopted together! YIPPEE! They joined Sampson, and the play began. 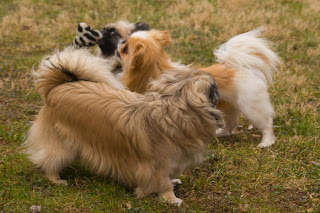 They had no problem including Sampson in their games, and he was delighted to join in! He was so glad to have playmates. 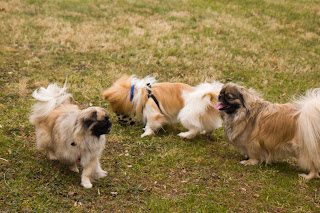 Sasha tired out first-- so Sampson and Legend kept playing. But, soon, they all decided to take a rest. I think the noise level is going to go up at their new home! 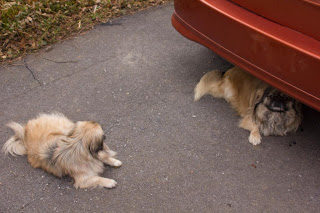 Lots of play. Lots of rest. Lots of fun! 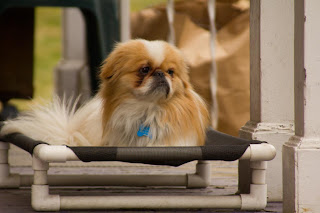 Legend found a bed to rest on-- and he can just survey the yard and decide when to begin the games again. I'm so glad they were adopted together!
Posted by Linda at 5:00 AM

How lovely to see them play and its great they were adopted together too!!

How blessed Sasha and Legend are to have such a wonderful new home! I hope that they have years of fun times ahead!

Yay for happy news:) They look so happy!

How wonderful that they all get along so well and are enjoying life with their new family!