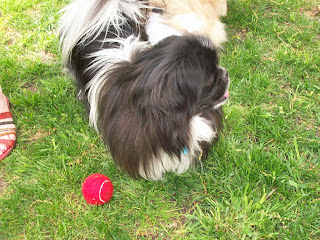 Suet-Suet's parents came to visit! I feel like I have known them for awhile because of emails about Suet-- but this is the first time I met them. They came to meet some of our foster dogs-- Tinsley played with his ball almost the whole time! 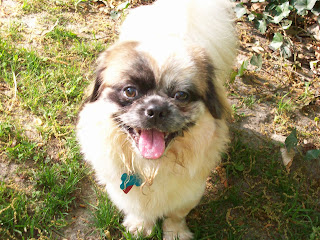 Harper wanted to play with all the dogs here-- there were 8 running around the yard. (He doesn't realize they don't all want HIM to bug them haha.) 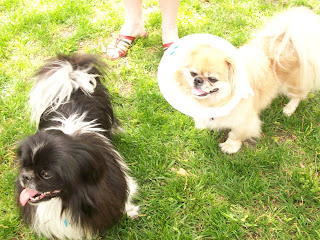 Tinsley and Chaumey (with his e-collar) did great. Of course, I wanted each dog to introduce himself to our visitors, but the dogs were more interested in each other. 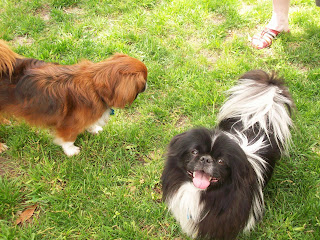 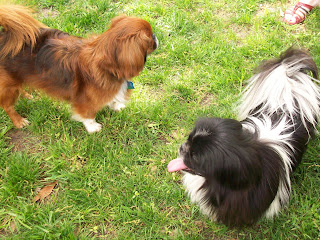 And panted from chasing the ball. He LOVES his ball! 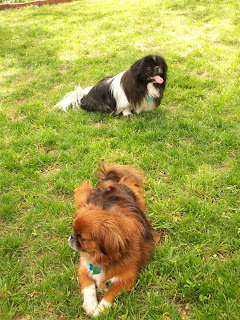 Tinsley and Kai Kai were pretty mellow-- just laying down. I think Tinsley was really waiting for the ball to be tossed again. Kai Kai won't chase a ball. 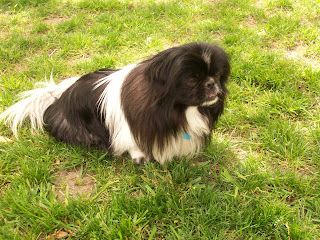 Tinsley's coloring is beautiful. If you remember, he came to us after being chained up for 2 years, year-round in the mountains. 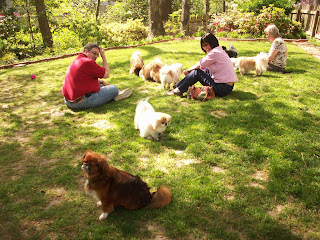 Here are the human and dog visitors and residents! 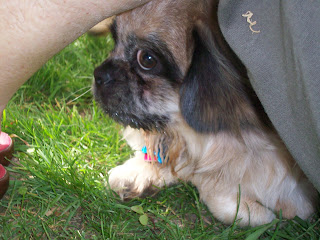 Harper hid under Suet-Suet's mom's leg. If another dog corrects him, he listens! Don't let that sad face fool you though. 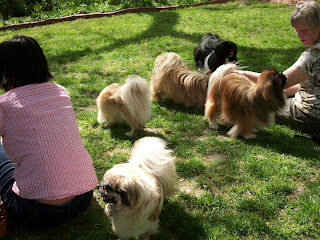 With all the dogs, we were amazed how well they all did together. 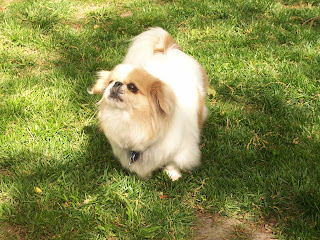 Even Starlight came out to let herself be known-- bark bark bark. Do not touch me! 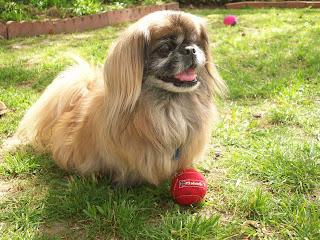 Max came out and hoped someone would throw his ball, too. The problem was that if you threw a ball, multiple dogs would go after it. Not always a good thing. "It's my ball, no, it's my ball....." 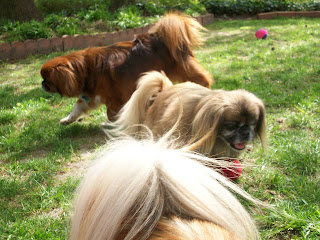 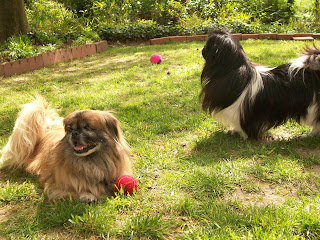 Oh, there are two balls-- go get it Tinsley! 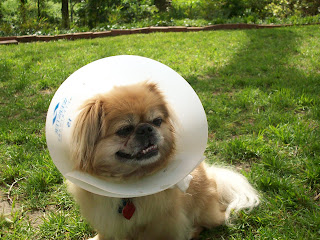 Chaumey had a great time. He is a sweet dog-- he decided that he sleeps on the bed with us. Settles right down for the night. Okay, we gave it since we didn't want to hear him cry. I've never let a foster dog sleep on the bed before! (Okay, Kai Kai doesn't count.) 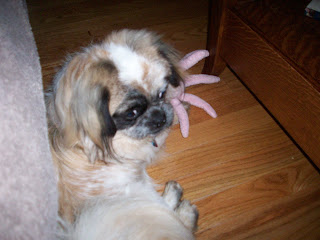 After everyone left, Harper the puppy was tired. He was content to take his octopus into the family room and just lay and look at it. It was a good day! I hope we can find the perfect dog for Suet-Suet's family. They are ready for a new addition.
Posted by Linda at 1:00 AM

Big smile on my face looking at them all !

I would have loved to have been there to enjoy the antics. Your descriptions are priceless!

What precious dogs - love to see them all interact and play! I think my Weezie would enjoy another Peke (instead of Romeow) LOL