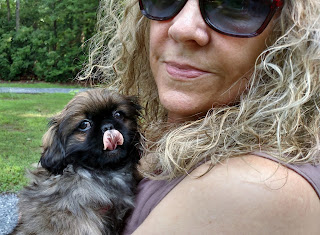 Rufus is an 11 week old puppy-- he was purchased at a pet store.   A friend of mine bought him-- and now she knows all about these places.   You see, Rufus has been with her for a week and she has spent a fortune on him to save him.    Rufus was neutered and had hernia repair at 8 weeks and was "deemed healthy" the next day and shipped to a puppy store.   He became seriously ill, but instead of isolating him, he was put with all the other puppies, who would have, most likely, become sick also.    Pet stores do not care if their dogs are exposed to illness-- they are in it for profit.    They get their puppies from back yard breeders and puppy mills-- but they tell you they get them from good places.  Not true!    One of these puppy stores opened in my area, and the people there to protest was amazing.    After languishing in the pet store for 3 weeks, my friend bought Rufus, not knowing how sick he was. 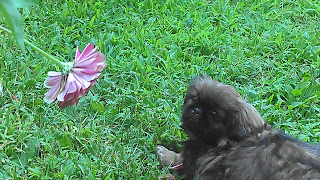 My friend now knows the truth, which we in rescue have been trying to teach others for a long time.   Puppy mills need to go-- stores that sell puppies need to go.   There are good, reputable breeders if you want a purebred-- but a pet store is not where these dogs are.    My friend has now made it her mission to educate others, to contact: the American Veterinary Medical Association, the owner of the pet store chain.   She has contacted news people in hopes that more exposure can be brought to these sick dogs and hopefully prevent them being shipped and sold like hers was.   She did not realize the magnitude of this.   Rufus now has a chance of a good life, but only because someone cared enough to spend a lot of money on him.   It's only because he landed safely in a home that cared.    Many don't.    I'll keep you updated on Rufus-- he is one lucky Peke.
Posted by Linda at 1:00 AM

Bloody hell Linda .... this is the SAME here in Australia !

Why the Government does not BAN pet store sales and puppy mills I DO NOT KNOW!!!

Let me ask this question, there are so many people that would take a baby, whether pure breed or half breed, on a minute.. But to buy one from a breeder you need to give your first born, and then hope and pray you make it with that baby to a yr let alone 1 month. I am one of those folks, I have half pom, half peke, and she is the love of my life, but we my daughter and The kids think she needs a friend to keep her company. Her brother was a full pom, and he died yrs ago, and the cats don't want to play.. Rescue people want or more than you have to pay to bring them from one state or another.. there are so many babies being talked about with all these people in puppy mills, what happens to these babies, and how do you get past all the red tape. We have a home, it's fenced in, we have a great vet, we have food and toys, and a bushell of love and attention. How do we get a baby.Thanks Kathleen Shepard, Pottstown, Pa.