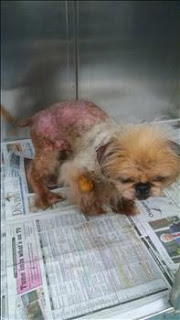 Richmond Animal Control contacted us.   We just took in Lester from there and they had another critical Peke.    Could we help her? 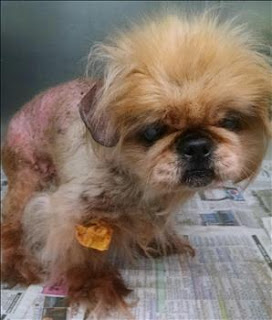 She is one of the worse neglect cases I've seen.    No care at all. 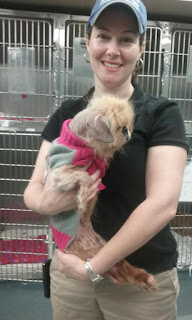 The people who work at RAC are wonderful.   They got rid of her fleas and were going to do all they could for her.    They wanted us to know they were not going to put her down, they were going to try to help her.   I love shelters like this. 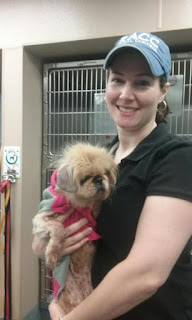 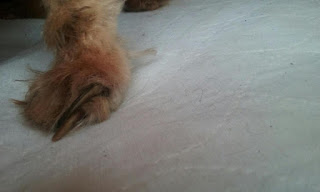 Her nails were like daggers-- and the hair was matted into them, making it tough to trim them-- but they did get trimmed. 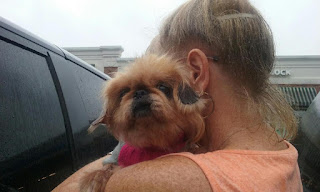 Sherry met Jeanne in Williamsburg to pick up this little girl. 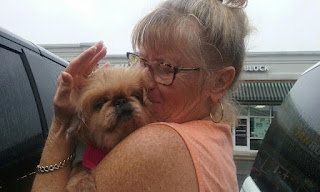 Once I met Sherry at the vet, we began our "what should we call her" conversation. 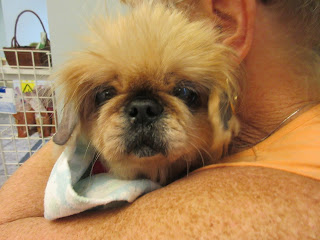 We decided Joyful would be her new name because today is a joyful day where her life has turned around.  I added Grace to her name-- Jeanne gives a lot of hers double names, so I decided Joyful needed a double name, too.   Hello, sweet Joyful Grace. 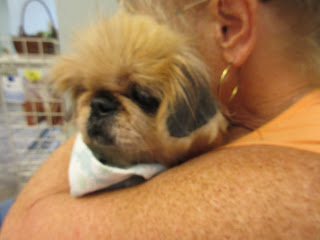 Her ears have almost no hair on them, and they are black, showing long term flea infestation.  There is no hair on her back, stomach..... 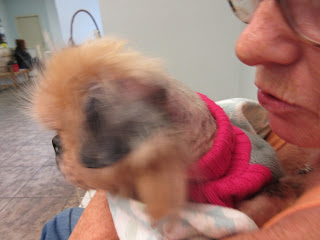 Her skin is inflamed, but gentle baths will immediately begin to help. 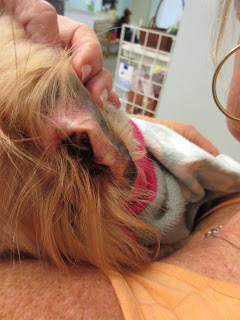 Her ears are infected, so we got medicine for that.   She received an antibiotics shot and meds for worms.   You know with as many fleas as she had, that she has to have worms. 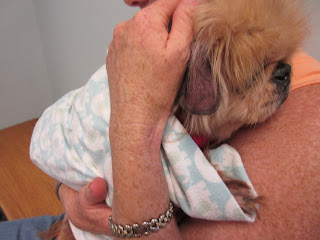 She had on a little sweater that Jeanne put on her, but I also gave Sherry one of the baby blankets to wrap her up in.    I know Beach Bit and Sugar Bit would want to share. 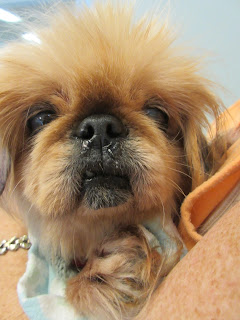 Look at this precious face-- could you resist helping her? 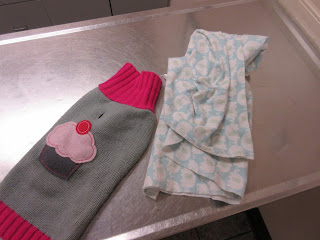 Here's her sweater and blanket-- they had to take them off to do all her checks, bloodwork.   She will have eye medication to lubricate and treat her eyes.   She will have a cyst drained in 2 weeks-- she went through enough today. (The vet thinks the cyst is just fluid filled, not a problem.)   Her teeth are BAD.   I have a dental planned for one of my dogs for the day after Thanksgiving, but if Joyful is able to have a dental then, I'll trade appointments with her, so she can get the care sooner.    I know my Kai Kai would be just fine with that. 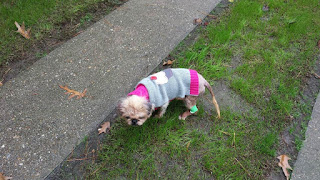 Her sweater went back on to go home with Sherry and she began to check things out.   I'm going through my doggy coat selection to find her a coat for colder days-- they will be arriving quickly. 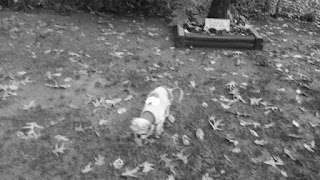 Yes, I think things are looking up for her. 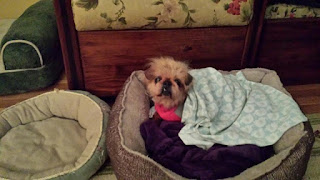 Here she is at Sherry's-- the other dogs checked her out and they were fine with her joining the group.   She is heartworm negative (and tick panel negative) and we think she will be beautiful!    Actually, we think she's beautiful already.    I'll be doing updates on her!    Thank you to all of you who have been sending in donations for her.    You are the best!
Posted by Linda at 1:00 AM

Oh Linda ..... I am so glad you have Joyful Grace.
How and why does a dog get this bad!