I've had Kai Kai for over five years now.   He just turned 11 last month.  He was given up by his owners because they were afraid he would hurt the kids.   I can't imagine-- Kai Kai has the most gentle heart and is almost incapable of aggression.   (Even with everything he went through with his eyes, he never tried to bite or be contrary.) 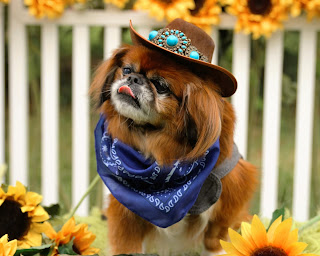 At our picnic, he still had his eyes, but no sight.   Close up, you could tell his eyes were hazy and not in good shape.  He was getting so many eye drops throughout the day. 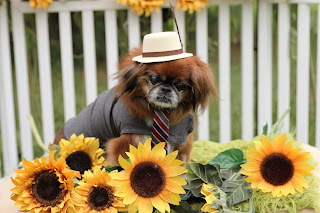 He was a good sport about having his pictures taken, and being dressed up. 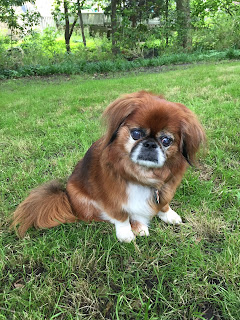 We fought to save his sight-- cataracts, retina detachment, glaucoma-- but we couldn't save his sight.  And after glaucoma started, he was in pain and the only solution was to remove his eyes.   No medications were helping. 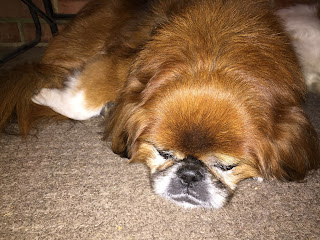 He is learning to get around, and when he's tired of trying to find me, he just sits, wags his tail and waits for me to pick him up-- which I gladly do.   I love this boy! 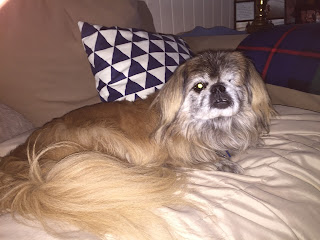 Max has one eye, and he still can see, so he thinks it's his job to make sure Kai Kai is okay.  Whenever we get home from an appointment, Max checks Kai Kai out all over to make sure he is okay.    Kai Kai just wags his tail. 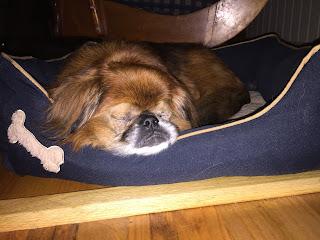 Is Kai Kai handicapped?   Well, he has no eyes, no vision.   He is learning to use his other senses, and technically, he is handicapped.   But, I love what Celeste wrote when she said, "A dog who is loved is never handicapped."  LOVE IT! 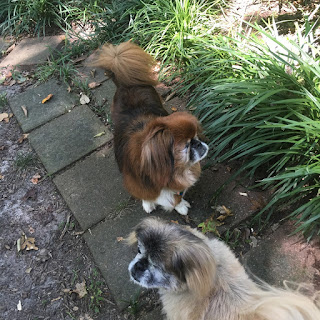 There is a group on facebook for owners of blind dogs and it has been so supportive and helpful.   So many dogs are going through what Kai Kai has and continues to go through.   But, Kai Kai is happy.   His tail is in constant motion.   He is learning his way around, but I block any access to stairs.   He has not attempted to go up them anymore, but I don't want him to fall down them! 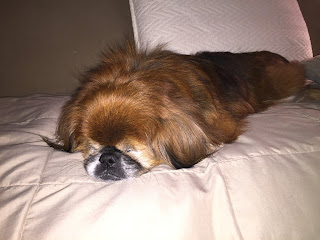 I was giving him a bath yesterday and realized that I no longer had to worry about getting shampoo in his eyes.   It's "side way" humor, but I still smiled.   In the eyes (no pun intended) of the world, Kai Kai may be handicapped, but in my eyes, he is just love.   Happy, loving, sweet.   He loves his food, he loves treats and he loves for me to pick him up.   He loves sleeping where he can touch me.   He loves being on the couch beside me.   So, with all the love going around him, I think he's just fine.   Handicapped or not, he's mine, and I adore him!
Posted by Linda at 12:30 AM

Oh Linda ..... what lovely words you wrote for sweet Kai Kai.
I am so glad he is going along OK with his blindness and I do believe , a world without pain in the eyes for him must be so much better.
Kai knows you are around him :) :) :)

It's amazing how we toss a pet for things we help a hymn with. Kai adapted just like a blind human and still feels love and gives it back!